Syria’s government has recaptured half of Eastern Ghouta, battering the shrinking rebel enclave on Wednesday with air strikes that killed dozens and defying U.N. calls for a halt to violence. Afghan and Palestinian loyalist militiamen are deployed to help the ground invasion.

The blistering onslaught has prompted international outrage, including accusations by the United Nations that the government was orchestrating an “apocalypse.” 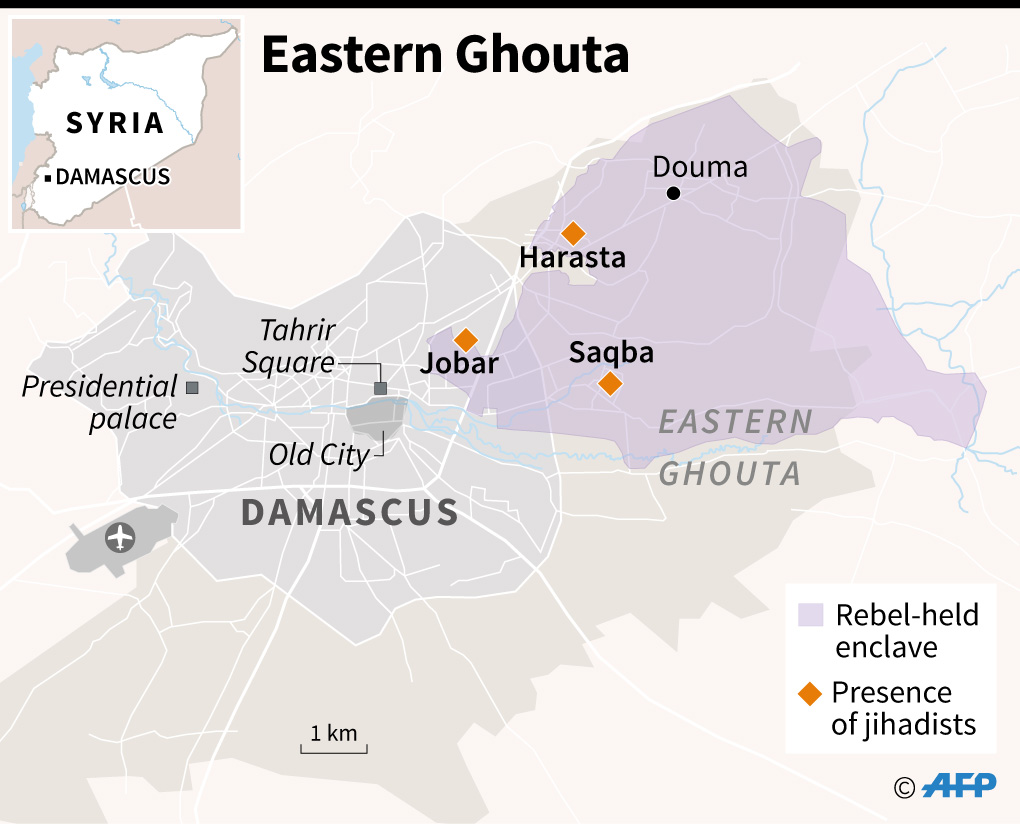 The Russia-backed Syrian army and allied militia began a fierce bombing campaign on February 18 on Eastern Ghouta — the last opposition bastion near Damascus — then launched a ground offensive a week later.

The campaign has so far left at least 867 civilians dead, including dozens of children, according to the Syrian Observatory for Human Rights.

Towns and villages have fallen in quick succession in recent days.

On Wednesday, government forces captured Beit Sawa, Al-Ashaari, and nearby farmland, the Britain-based Observatory said, putting them in control of more than half the territory once held by rebels.

Heavy air strikes, mostly by Russian warplanes, left at least 62 civilians dead including four children across the enclave, said the Observatory, which relies on a network of sources on the ground.

More than 50 air strikes pummelled the town on Wednesday. A wounded woman could be seen stuck under the rubble of a collapsed building.

Ceasefire did not Help Stop Carnage

The advance came after hundreds of Afghan, Palestinian, and Syrian loyalist militiamen arrived in Eastern Ghouta to bolster the ground push, according to the Observatory.

Government troops in military vehicles were seen on Wednesday patrolling Al-Mohammadiyeh, an agricultural zone in the southern part of Ghouta recently retaken by the regime.

Across some green farmland, columns of thick smoke rose from an urban skyline.

The bombardment has continued despite a one-month ceasefire demanded by the U.N. Security Council more than a week ago.

The council met behind closed doors for three hours on Wednesday to discuss the failed truce, after France and Britain requested urgent talks.

Dutch Ambassador Karel van Oosterom, who holds the council presidency, told reporters that members had “expressed concern about the humanitarian situation” and reiterated calls for the ceasefire resolution to be implemented.

UN peace envoy Staffan de Mistura briefed the meeting and offered to help broker a deal with Russia to allow fighters in Eastern Ghouta to leave, a diplomat said, adding that diplomats supported the idea as a way to halt the violence.

“This month, it is Eastern Ghouta which is, in the words of the Secretary General, hell on earth,” he said.

“Next month or the month after, it will be somewhere else where people face an apocalypse — an apocalypse intended, planned and executed by individuals within the government, apparently with the full backing of some of their foreign supporters.”

Eastern Ghouta’s roughly 400,000 residents have lived under government siege since 2013, facing severe shortages of food and medicines even before the latest offensive began.

Forty-six aid trucks entered the area on Monday for the first time since the offensive but had to cut short their deliveries and leave due to heavy bombardment.

Nearly half of the food aid could not be delivered, and Syrian authorities removed some medical and health supplies from the trucks, the United Nations said.

UN Secretary-General Antonio Guterres urged all warring sides to allow aid trucks to return for a planned second delivery to the enclave’s main town of Douma on Thursday.

Linda Tom, spokesperson for the UN’s humanitarian coordination office OCHA in Syria, said the aid would aim to reach 70,000 people in Douma and would include medical supplies not allowed in Monday’s delivery.

The offensive has displaced more than 10,000 people in Eastern Ghouta, according to the Observatory.

Outside of Douma on Wednesday, dozens of residents could be seen pushing wheelbarrows and carts piled high with mattresses, rugs, and cardboard boxes.

They have opted to flee deeper into the rebel-controlled enclave, despite a so-called “humanitarian corridor” announced by Moscow last week.

Russia said it would guarantee safe passage to civilians and rebels wishing to flee the enclave during a “pause” that is meant to bring calm to Eastern Ghouta between 9:00 am (0700 GMT) and 2:00 pm.

No Syrian civilians are known to have used the “corridor.”

The two main rebel groups in Eastern Ghouta — Jaish al-Islam and Faylaq al-Rahman — deny the exit routes or the pauses have been coordinated with them.

“There is no communication with the Russians, directly or indirectly,” said Wael Alwan, spokesman for Faylaq al-Rahman.

More than 340,000 people have been killed and millions displaced in Syria since the civil war started in 2011 with the brutal repression of anti-government protests.