It is not an easy task to campaign against a change that proponents argue will spawn a better era. In Turkey, campaigners for yes to a constitution that will expand presidential powers designed their strategy to herald a much better, stronger and prosperous country. Campaigning against this is a doomed strategy from the start. But how did Chileans overcome this challenge?

What is more colorful and positive than a rainbow? To inject an aura of positivity to their No campaign, Chileans used a rainbow as a symbol of their campaign that ended the country’s decade of military dictatorship 30 years ago. 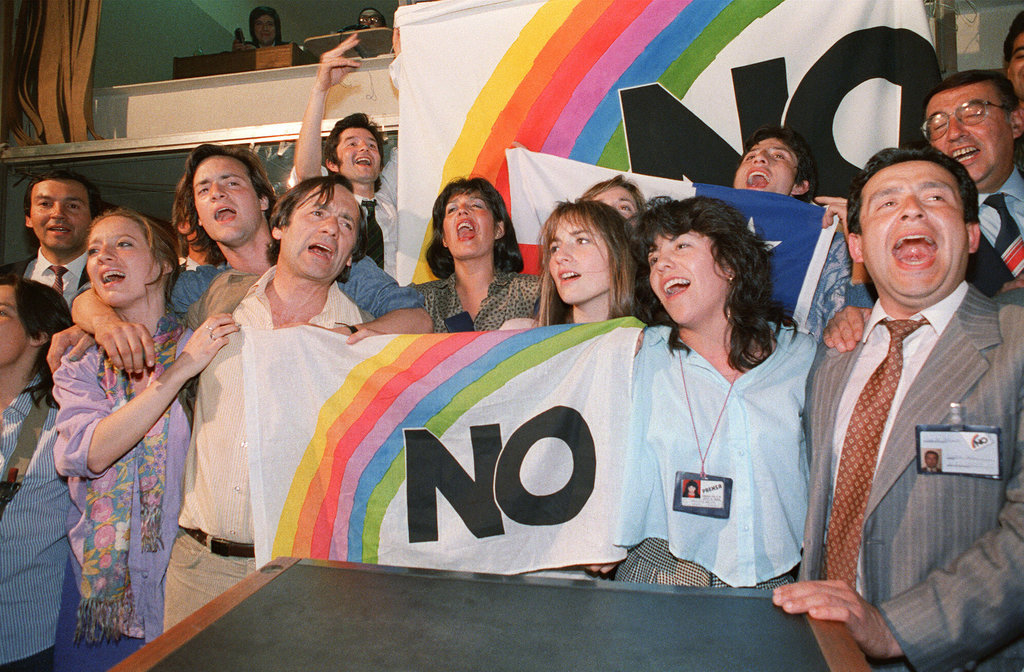 In late 1988, Chile stood at a crossroads after country’s notorious leader, Gen. Augusto Pinochet, decided to hold a referendum in a bid to legitimize his rule defined by the mix of economic prosperity and political terror triggered by the bloody coup in 1973. His iron-fist rule had brought robust economic growth to the Latin American country, but also unleashed unrelenting crackdown on dissent and repression of political foes of all stripes, especially Socialists.

When he promised to hold a referendum to secure the popular mandate, few believed that Pinochet would be defeated through a free vote or he would honor the election result if people say “No.” The bulk of the debate among fragmented anti-Pinochet camp also revolved around how to craft a working, successful campaign strategy to bring the demise of the feared general.

Over-confident with his standing — after all, he reversed years of economic decline, long queues for food, a spiraling inflation and endless strikes that characterized the country before his ascent to power — Pinochet allowed dispirited and divided 16 opposition parties on both sides of the Chilean political spectrum to air 15-minute campaign ad on TV late at night to make their case. It was a negligible concession or gesture to a ragtag of opposition parties plagued by infighting and squabbles given that TV channels were under the firm control of the military regime for the rest of the day.

Even not satisfied with that, the pro-Pinochet camp also circulated ads for ‘Yes’ campaign on TV during prime-time when audiences were captives of TVs at their homes.

That decision proved to be a turning point for the opposition and the country as they were well aware of the fact that even that 15-minute timeframe could make a difference. Instead of fear-mongering or repeating old, classical campaign cliches to illustrate potential pitfalls and hazards attributed to maintaining Pinochet in power, the opposition came with a promising campaign slogan —Chile, La alegría ya viene (Chile, joy is coming).

The ad contained nothing negative about supporters of Pinochet, or warning about consequences of keeping a dictatorship in place. Instead, it broadcast positive content, a theme that creatively told people that the country could move forward with voting “No.”

The real-life political saga was captured by Director Pablo Larraín in his Oscar-nominated movie “No,” revealing the process that led to crafting a commercial, something upbeat and promising that changed the destiny of a country.

Now a similar drama plays out in Turkey as it stands on the brink of a historic moment  —  a regime change — amid a looming referendum in April. The vote will broaden powers of President Recep Tayyip Erdogan in a way what many fear will usher in an era of one-man rule with checks and balances scrapped.

The opposition in Turkey is marred by a toxic atmosphere of fear and relentless government pressure during the state of emergency amid an unabated clampdown on political opponents of all creed since an abortive coup last summer. What started as a crackdown on coup plotters, real and suspected, soon unraveled into a full-blown assault on dissent, media, opposition, academia, all forms of free and critical thought, as sweeping purges decimated civil service and bureaucracy after the government has sacked more than 140,000 public workers.

Turkey enters a referendum period under such a gloomy political context. The government’s grip over national media leaves little room for naysayers who are striving to make an efficient campaign to persuade people to vote ‘No’ to systemic change. Though their ordeal is no less challenging than Chileans, Turkey’s opponents of the presidential system still have plenty of effective tools unavailable to people in the Latin American country in late 1980s.

CHP is eyeing to build up a similar ‘No’ campaign with avoiding an antagonistic language against ‘Yes’ supporters, President Erdogan and his late enemy-turned-ally Devlet Bahceli, leader of the Nationalist Movement Party (MHP). Instead of targeting President Erdogan and his backers, the CHP campaign will focus on positive themes. The party will try to tell people Turkey will find ‘peace’ and ‘order,’ if the proposed constitutional amendment is rejected.

The party officials are told to adopt an inclusive, peace-promoting and embracing discourse.

The ‘No’ ad in Chile featured musicality, people dancing in the streets, an atmosphere of carnival permeated the message. Now, Turkey’s CHP embarks on the same path, hoping to awaken the nation over the danger by invoking positive language and theme.

Separately from CHP’s party policy, that approach has already been displayed by citizen journalists, social media activists or singers who all appeal to creative ads or songs instead of launching hard-hitting campaign against political rivals. Government’s equation of naysayers with terrorists or traitors appears to be downbeat and an old-fashioned tactic, a factor that is even acknowledged by some pro-government journalists.

A Chilean version of No campaign in Turkey may bolster the standing of Turkish naysayers in their campaign to outwit and outclass the supporters of constitutional change, or adoption of presidential system.