I Was Sentenced To 22 Years For This Magazine Cover

A day after President Recep Tayyip Erdogan declared an electoral victory, 10 police officers stormed our office. The first order of business after the elections was to raid NOKTA, a critical news magazine that I headed. They detained my deputy and me.

As the police transported us to a prison in a van, they loudly played marches featuring Erdogan to send me a message that it was the president who wanted my arrest. I already knew that.

Our journey was to a large penitentiary outside Istanbul that Erdogan built to fill thousands of his opponents. It was part of a construction frenzy that came to define his 14-year rule in the country. Concrete skyscrapers dotting Istanbul’s winding coasts were the signature project of Erdogan, whose regime was exceptionally successful in real estate.

For this reason, I believe notorious Silivri prison that I stayed is a structure that could best explain the Erdogan regime. It is particularly designed to separate people, isolate them and make them bow.

In my cell, a tiny window that was specifically put in the lower half of the huge steel door to make you bow when you’re speaking to a prison guard. Days and nights passed in a solitary confinement without talking to anyone. I was basically cloistered within the 25-feet high walls.

The prison I stayed was crowded with journalists, musicians, judges, prosecutors, police, army officers, and academics. Hundreds of very well-educated individuals stayed in cells around me, but I could not talk to any of them. 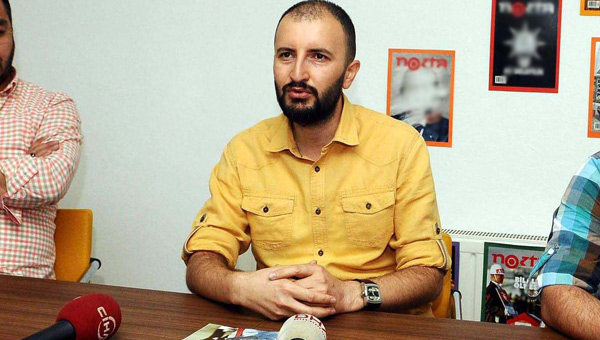 Charges against me were frequently changed throughout the investigation. I was released pending trial after spending 2 months in prison. They seized my passport and I had to report myself to the police every week.

The 14th Istanbul High Criminal Court that released me and some of my colleagues angered Erdogan. Similar to how he threatened me prior to my arrest, he was now threatening the court for releasing us.

Judges on the bench were first dismissed from their posts. Then one of them was arrested. My lawyer was also arrested. New charges were pressed against me and newly appointed judges handed down 22 years and 6 months in prison sentence this week. My crime: Publishing a news magazine cover.

I am 38 years old today. When I leave the prison, I will be 60 years old. My daughter will likely be married. Perhaps she will meet me outside the prison with her kids. My son will be in the early years of his professional career. I actually don’t want him to be a journalist, to be honest.

I am not writing these sentences from a prison cell. Before they came for me, I gave all my life savings to a smuggler, who snatched me out of the country in the dead of night. I rescued my wife and my kids from Erdogan regime’s hell.

I am a refugee now…

If I surrendered or if Erdogan’s agents kidnap me from the country I am in, 22.5 years of my life will be spent in a prison cell.

Turkey now needs brave journalism more than ever. When journalists like us go to prison, Erdogan achieves his goal. It is imperative that we don’t allow Erdogan to silence the media by imprisoning us. To continue fighting for our civil liberties, I left the country.

As we departed the Turkish coast by a dinghy boat, my wife looked at our homeland one last time, with tears racing down her cheeks. My kids, firmly holding on with both of their hands, were unaware of the drama unfolding in their lives. Throughout our journey to freedom, they never spoke until we reached a refugee camp, mostly occupied by Syrian refugees. Among those Syrians who fled the violence in their country, there is now room for Turkish refugees.

This is how dictatorships start. First journalists and intellectuals pay the biggest price. Our lives would either be destroyed in prisons or we would leave the country.

If there was a tiny hope for a fair trial, I would definitely stay and face the court. Reckoning with Erdogan’s regime at the court would have been my honor.

Of course, it is out of the question to talk about a fair trial at a time when prisoners are going through every kind of torture, including rape. Especially if it concerns a case of a journalist in which Erdogan is a plaintiff.

The media in Turkey has been under siege for many years. Businessmen who got lucrative state deals from the government purchased many newspapers and TV networks and turned them into propaganda machines. Companies of those media moguls who refused to sell their media outlets were seized through arbitrary court cases.

NOKTA was the last remaining biweekly news magazine. It was shut down during the state of emergency declared by Erdogan last summer. I stood against as Erdogan destroyed our democracy, pushed Turkey away from the West, supported jihadist groups in Syria and obliterated Kurdish towns by tanks. NOKTA magazine that I was editing stood firm against all these wrongdoings until it was closed down by the Erdogan regime.

I never took a step back from independent journalism, but it is a reality that Turkey is taken hostage by a dictator. I hope the violence perpetrated by Erdogan’s bodyguards in Washington D.C. last week would show to the world what type of relentless dictator he is.

The concept of a “Turkish refugee” is a confusing notion for Europe. I can guarantee that they will face with thousands of them in a short period of time. There is no room for anyone in a regime that Erdogan is building except Islamists. Not Kurds, not Gulenists, not Alawites nor Kemalists.

It is not really about the mass crackdown on Turkish opponents. This is someone who believes that he is the leader of the Islamic world and that he is the chosen one. Considering Turkey’s power, the danger is grave enough that we cannot ignore.

No Future For Turkey's Purged Officials