Veysel Kilic is walking from Ankara to Istanbul for justice to his imprisoned son.

Uncle Veysel, as known by the Turkish public, had spent 11 months in front of Caglayan Courthouse in a desperate attempt to capture the attention of authorities to his son who has been in jail for 11 months.

Even during the freezing cold of the snowy days in winter, or during fall and spring breeze, Veysel Kilic never left his spot. He was there with a Turkish flag, a picture of Ataturk, founder of the Turkish Republic, and a portrait of his son, a 2nd year Air Force Academy student who remains in prison for 11 months without an indictment.

The cadet’s ordeal had started when his commanders, under the guise of an exercise, sent him and his colleagues to the Bosporus bridge in Istanbul during coup night. Several soldiers have been lynched by angry people after civilian casualties when some of the soldiers opened fire at citizens confronting the troops.

There began a never-ending saga of pain and misery for him, for other cadets, their families and for the entire nation.

Anyone who somehow went to Caglayan Court Palace, the largest complex in Europe, would have seen the ailing old man with white beard, standing outside police barriers, seeking his voice to get heard by people, by media and authorities. Given that more than 30,000 people detained only in Istanbul, there is no chance of failing to see him in front of the courthouse, which became a regular spot for gathering for families. 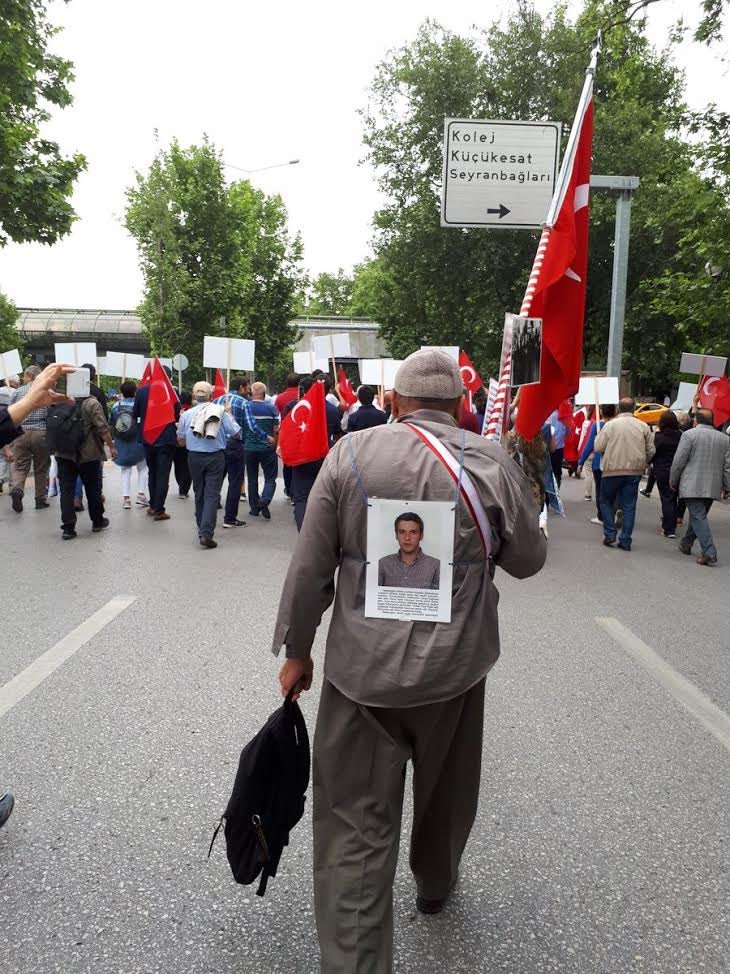 And that man began a long, 250-mile protest march from Ankara to Istanbul, along with the leader of Turkey’s main opposition Republican People’s Party (CHP) and other party supporters.

He quickly has become the symbol of the march. To join the march, he went to Ankara, leaving his spot in front of Caglayan.

During a break at first night, he had a conversation with CHP Chairman Kemal Kilicdaroglu who, in the absence of other available means given an ineffective Parliament under the state of emergency, set the national agenda by launching the “Justice” march to end the government crackdown on opponents.

The march has offered a rare chance for victims of Turkey purge and families of imprisoned people to make their voice in the face of media blackout during normal times.

The old man’s plea for justice went unheeded and mostly ignored by media, which is either voluntarily co-opted or forced into submission by the ever-squeezing government control. But in a rare moment of televised interview during the march, he shared his lasting agony since the day his son was incarcerated.

Mr. Kilic believes in the innocence of his son who he said was sent to the bridge by superiors to join a military exercise.

“I’m wretched. I can no longer sleep in the bed, I sleep on the couch. All I want is justice. Still, there is not a single court hearing,” the old father said in a rebellious tone, fulminating against lengthy pre-trial detention.

He has 4 children, 2 of them married, 2 not. Selahattin, the unmarried son, went to Air Force Academy upon request of his father. His successful career came to a dramatic end when a group of putschist military officers commandeered tanks, fighter jets and troops to remove the government.

The abortive coup on July 15 rattled the nation, killed 249 people and wounded nearly 2,000. It proved to be a defining watershed moment for Turkey’s politics, giving President Recep Tayyip Erdogan the chance to launch a sweeping purge to shape the state in his own image and ideology.

“I want my son back. I do not trust courts which you call impartial and independent. I want to live freely in my country,” he said in palpable distrust he harbored toward judiciary, which has been shredded since the failed coup with a debilitating purge and mass arrests of judges and prosecutors.

He went on to say that 80 million people believe that the academy students are innocent. They had nothing to do with the coup plot, he frequently said during the past year.

“I have only one question for Ankara [government]. If these kids were your children, would they have spent one day in prison?”

His question exposes an underlying resentment in the public, which has grown frustrated over double standards during trials over the past year. A subtle discrimination permeated the country’s already politicized judiciary, given the favorable treatment of relatives of senior ruling party members.

The march had a powerful impact on Turkey’s deeply fragmented socio-political landscape and boosted the morale of the opposition, which has been relentlessly gutted by the state of emergency measures. More than 150,000 public servants have lost their jobs, 50,000 jailed in post-coup crackdown and thousands of companies confiscated in a massive wealth grab by the government.

It was like a new awakening for the government’s discontents who otherwise resigned to their enfeebled and hapless state amid an expanding clampdown and a razor-thin loss in the controversial presidential referendum on April 16.

The contested but historic victory gave President Erdogan sweeping new powers, upending legislative and judicial checks on the executive branch of the government defined and amassed at the hands of man sitting at the presidential office.

What galvanized the opposition was the imprisonment of CHP lawmaker Enis Berberoglu on Wednesday. An Istanbul court handed him a 25-year prison sentence for his alleged role in a newspaper report and video about Turkey’s murky relations with the fighting rebel groups in Syria in 2015. Trucks, owned by Turkey’s National lIntelligence Organization (MIT), contained weapons and ammunition destined for Syrian rebels.

It elicited a swift reaction from the government and President Erdogan pledge a severe punishment for then-Cumhuriyet Editor-in-Chief Can Dundar and Ankara bureau chief Erdem Gul.

It was the first time a lawmaker from the main opposition party was sent to jail while 13 deputies of the pro-Kurdish People’s Democracy Party (HDP) have already been imprisoned over terrorism-related charges. In may 2016, the CHP helped government steer a legislation to lift immunities protecting lawmakers from prosecution, a move that set the stage for the imprisonment of its lawmaker this Wednesday.

The march has generated great public interest and regarded as a belated but essential move to pull the enervated opposition out of complacency.

Appeared confident and emboldened during the march, a sun-burned Mr. Kilicdaroglu said he will march until justice is restored.

It was not lost on the government front with Prime Minister Binali Yildirim urging the CHP leader to call off the 20-day march.

“I advise Kilicdraoglu to abandon this act,” the prime minister told media. “Justice cannot be sought on the streets, Turkey is a state of law… Even if we don’t like a court’s ruling, we have to respect it,” Reuters quoted Mr. Yildirim as saying.

Justice Minister Bekir Bozdag offered a disparaging remark to describe the protest. “It is not possible to break the balance of affairs of justice by walking on roads,” he said.