“The AKP will lose its position of power and stand trial.” So said Ahmet Altan, a critically acclaimed novelist and former chief editor of the Taraf daily, a day before July 15 coup.

During a televised program he attended with his brother Mehmet Altan, co-host of the program along with veteran journalist Nazli Ilicak, on now defunct Can Erzincan TV on July 14, Ahmet Altan spoke about his latest novel, its relevance for contemporary Turkish politics and Turkey’s modern political history that was so much interrupted by a series of military interventions during the second half of the 20th century.

The novel was a literary thrust to turbulent years in the early 1910s under the leadership of the Committee of Union and Progress (CUP) or Young Turks, a period that saw a steady descent into one war after another that finally brought the demise of the Ottoman Empire in the most dramatic way.

The timeline of his last novel Dying Is Easier Than Loving was set during the Balkan Wars, a prelude that plunged the Empire into the Great War.

“On the background of the personal adventures of the characters, this novel tells the story of the Balkan Wars and the incompetence of the Ittihatci [CUP] leaders who came to power as well as the brutalities they implemented in order to hide their failure to govern the country properly,” Ahmet Altan said in his defense read to the court via teleconference from prison.

The analogy was unmistakable. “That is why the Ittihatci leaders of the day and the AKP [Justice and Development Party] government whose present-day policies are very similar to those of the Ittihatci leaders were discussed,” he said, evoking a distant past that, according to Mr. Altan and many people, bears striking similarities with today’s Turkey.

But it was his forecasting that the ruling AKP will lose hold on power and its leaders will face a trial that produced a lasting trouble for him. 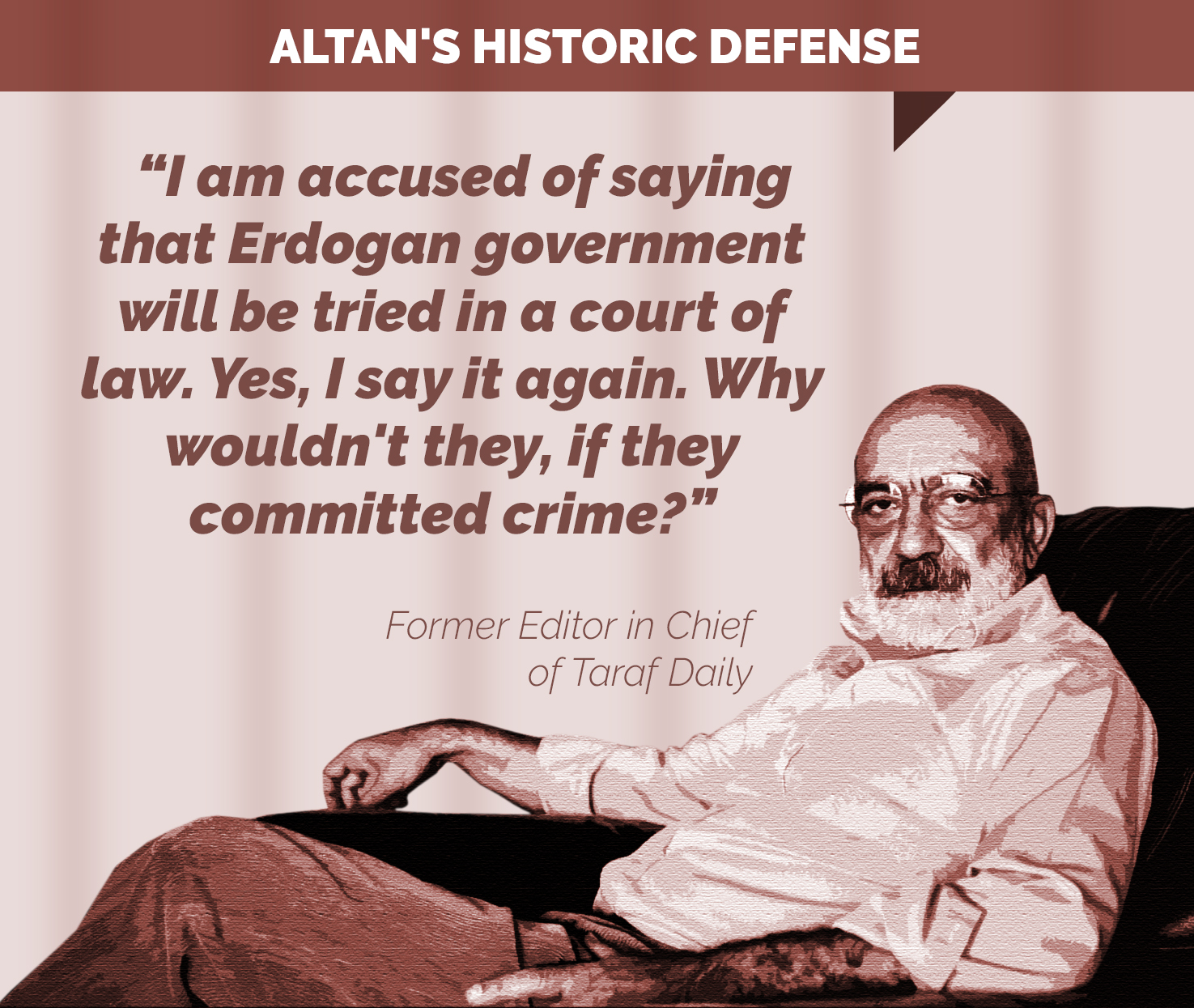 “The AKP will lose its position of power and stand trial.” For this sentence, Prosecutor Can Tuncay seeks 3 aggravated life sentences for Ahmet Altan.

Before indulging in his defense, Mr. Altan said the indictment, which is written very poorly in Turkish, deserves no legal defense as there is no fair trial and an independent judiciary.

“This poor indictment, which not only lacks intelligence but also legality, is too meek to carry the immense weight of the aggravated life sentence it requests and does not deserve a serious defense,” Mr. Altan added a caveat before starting to offer a meticulous, step-by-step argument to refute charges.

The reason for his defense is not an expectation for justice to be served, but leaving a historical document to future generations and a record for the day when the rule of law is re-established in the country.

According to the indictment, the prosecutor accuses Mr. Altan of having links to the putschists and Gulen movement, which had been designated by the Turkish government as a terrorist organization.

But how he builds a link between Mr. Altan and the coup plotters appears to be misplaced and unconvincing.

To build the link, the prosecutor cited figures from media whom Ahmet Altan worked with in the past, and had some contacts to a very limited extent during encounters in Turkey’s media ecosystem.

But any encounter or meeting with someone who are later accused by the Turkish authorities does not constitute a crime in itself. “How can “knowing” someone be accepted as the evidence of a crime?” Mr. Altan asked the court.

But Ahmet Altan says the prosecutor simply disregards the factor of individual responsibility for crimes, the need to provide a substantial evidence to link someone to a crime, not ‘guilt by association’ approach that has become commonplace in hundreds of trials across Turkey.

“In one of his novels, John Fowles says that all the judges in the world are judged by their own decisions.

You, too, will be judged by your own decisions.

How you want to be judged, whatever kind of verdict you would like yourself, how you would like to be remembered, judge accordingly,” Ahmet Altan said in his closing remarks.

“Because you are the one who will be judged,” P24 quoted him as saying.