by Alida Karakushi
in Featured, World

TIRANA, Albania – Even though Albania is still just a candidate to become a new member of the European Union, it has already become a European capital of a sort. The country located in the southwestern portion of the Balkan Peninsula has turned into the largest producer of outdoor-grown cannabis on the continent.

Several factors could have contributed to the canabization of Albania, including the country’s geography, climate, demographics, and economy.

Borders with Greece and Italy ensure easy access to the larger European market, and the country’s mountainous terrain makes it difficult for police to detect illicit activity. 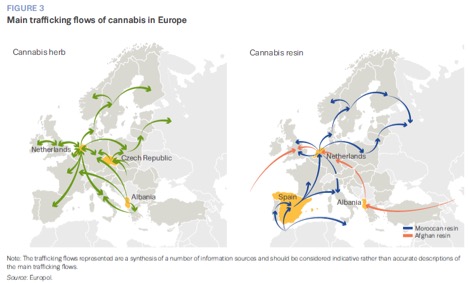 At the same time, high unemployment rate among the youth (about 27 percent) and a low official minimum wage of some $211 per month, force people to seek alternative ways of making a living. Moreover, depopulation of the region has led to a lesser institutional presence and resulted in the lack of territorial management by the government.

The E.U. began to focus discussions on the need to fight against drug trafficking in Albania only after the June general elections. Last year, the issue remained largely off E.U. radar despite statements from the Albanian opposition.

U.S. Ambassador Donald Lu was slammed by the opposition for the same reason: he failed to address the issue despite multiple requests.

The opposition has also expressed concerns about vote-buying during the election which could have been enabled by cannabis industry money.

A policy scholar, who spoke on condition of anonymity, told The Globe Post that the reason why the E.U. did not immediately address the trafficking problem could be related to the growing demand from the cannabis market, which has not been met by legal cannabis cultivation in Europe. The scholar argued that Albania could be considered a better supplier than a third country outside of E.U. monitoring that could use drug revenues to finance terrorist activities.

The European Commission was not immediately available for comment.

In 2016, the E.U. cannabis market value was estimated at some 9.3 billion euros. Last year, Albanian police destroyed 2.4 million marijuana plants worth about 3 billion euros, or one-third of the country’s GDP evaluated at 12 billion euros. 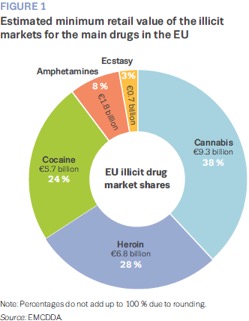 Even though police do regularly take action against cannabis trafficking, media reports continue to link law enforcement with the traffickers, citing the flow of tons cannabis that continues to come from Albania into Italy, where it is seized by local authorities.

The situation became so complex earlier this year that it forced the head of the Italian Anti-Mafia agency, Franco Roberti, to meet with the Albanian general prosecutor Adriatik Llalla. During the visit, he delivered a strong statement saying “the quantity of cannabis cultivation in Albania has tripled during last two years.”

A 2016 Europol report names Albania as a major cannabis producer that supplies the European market mainly via Italy and Greece.

Cannabis cultivation remains illegal in Albania, and the new Socialist coalition government that came to power in 2013 waged a frontal war with trafficking. However, cannabis cultivation spread all over Albania, even though it was previously fairly contained in the southern region of Lazarat.

On Tuesday, Albanian prosecutor Besnik Hadermataj called for the arrest of former interior minister Saimir Tahiri on allegations of involvement with a drug trafficking gang operating in Albania and Italy.

The socialist members of the commission sided with the former official saying they would allow the prosecutors to question Mr. Tahiri and check on him at home, but they argued there was not sufficient evidence to indicate his involvement in the gang’s operations.

Mr. Tahiri has denied the allegations.

The opposition has suggested that the Habilajs, the gang which reportedly profited during Mr. Tahiri’s time in office, had links to him. They said the official’s cousins used his car to transport drugs from Albania to Greece.

Furthermore, the opposition recalled that in 2014, the former head of the anti-drug office Dritan Zagani accused Mr. Tahiri of supporting corrupt law enforcement officials who cooperated with the Habilaj gang.

After the claims, authorities prosecuted Mr. Zagani. Both Mr. Tahiri and Albanian Prime Minister Edi Rama said he was a corrupt policeman who interfered with police investigations. Fearing for his family’s wellbeing, Mr. Zagani sought political asylum in Switzerland.

On Thursday, the Albanian Parliament will decide whether to revoke Mr. Tahiri’s immunity. It is likely that it will remain intact since the ruling socialist party has a sufficient number of seats to vote against the move.

Critics, including Mr. Zagani, argue that Mr. Tahiri’s arrest could bring down many important political figures.

Italian media first published the information related to the drug trafficking investigation, reporting that six members of the Habilaj gang, who had been monitored and wire tapped since 2013, were arrested last week. Members of the ring included Florian and Moisi Habilaj, relatives of Mr. Tahiri.

Transcripts of conversations revealed that numerous members of the Albanian law enforcement have been involved in this activity.

“Do you get it, unlike in Italy, if you come to Albania the Albanian police is corrupt, sometimes it is the head of the police station helps us loading the bags,” one of the transcripts read.

Following the revelations, Mr. Tahiri distanced himself from the relatives.

“The only fault he made was to sell his car to his distant cousins,” he said, while denying having any information on drug trafficking.

To date, the prosecution has not been able to present a convincing case against Mr. Tahiri.

Holta Ymeri, an Albanian human rights attorney, told The Globe Post that she would oppose in court any measure to arrest the Albanian deputy due to thin and circumstantial evidence presented by the public prosecution.

“It is unexplainable why the Public Prosecution did not acquire as back up proof of phone tapping the deposition of the ex-policeman Dritan Zagani who was the first to shed light on this issue since 2015,” she said. “The great concern is that these failings during the first steps of the investigation may demonstrate a lack of real will to establish the facts and the criminal responsibility of the involved individuals the deputy included.”

Ms. Ymeri explained that political responsibility is different from criminal responsibility, since the latter should be proved beyond any reasonable doubt, and the former may be established by actions which do not result in criminal liability.

“To say it with the words of the famous Italian judge, victim of the Mafia, Paolo Borsellino: The fact that a politician has not been convicted by the judicial authority, due to lack of definitive proof, but there are facts emerging of his/her contacts with criminal organizations, should suffice for politicial responsibility,” she said. “A politician should not only be honest but should also appear as being honest.”

The Albanian judicial system has been criticized on multiple occasions. The socialist members of parliament claim the prosecution’s office is managed by the opposition. It has also been criticized for failing to extradite drug offenders wanted by the Italian police.

According to an investigation of the extradition cases by BIRN Albania, criminals take advantage of legal loopholes and the country’s weak judicial system.

The Albanian judicial system, including both courts and the prosecution, is perceived to be one of the most corrupt institutions. Last year the E.U. put pressure on Albanian politicians, urging them to reform the judicial system.

The government that came into power in June has made the fight against corruption and organized crime the motto of this mandate.

“No matter what the government says about fighting corruption, the talk means nothing unless top officials get investigated and, if merited, prosecuted and punished. Let’s see if the Tahiri case is a turn in the road towards justice or just a deceptive curve,” Fred Abrahams, author of “Modern Albania,” told The Globe Post.

COVID-19 Is No Excuse for Governments to Abuse Human Rights

EU Membership is the Only Option for the Western Balkans

What the EU is Getting Wrong About Enlargement into the Balkans