‘I Felt Guilty’: In the Philippines, Journalists Also Bear Weight of Drug War

by Jane Bracher
in Featured, World

It had been hours since darkness enveloped the Philippine capital one night in late July 2016, when Filipino photojournalists got the call for a fresh pair of crime scenes in the early days of the drug war. They had just wrapped up coverage of one dead near the country’s Senate Office, and the group had a choice for their next story. They swiftly decided to travel to the nearby busy intersection of three major roads, where they suspected more witnesses were present.

They were not disappointed.

Czar Dancel, a 28-year-old photojournalist and Reuters contributor, knew the moment they arrived that they had stumbled upon a different kind of crime scene. It shocked him and his colleagues from other publications, he told The Globe Post.

A crowd had already circled the body. Mr. Dancel clicked away his shutter right in front of a barefoot woman cradling the corpse of her partner who had been shot dead. A cardboard sign beside him read: “I am a pusher. Do not be like me.”

Mr. Dancel locked eyes with the woman for a second before she let out a piercing wail.

He would never forget that moment.

“I felt guilty. I graduated with a nursing degree so I knew first aid,” Mr. Dancel said. “But in that moment, I could do nothing.”

He was close enough to know the man was dead. Mr. Dancel never responded to the woman. Instead he chastised police officers at the scene for doing nothing for the man. It had been at least an hour since the shooting, but the crime scene team was still at the last scene the photographers had visited. 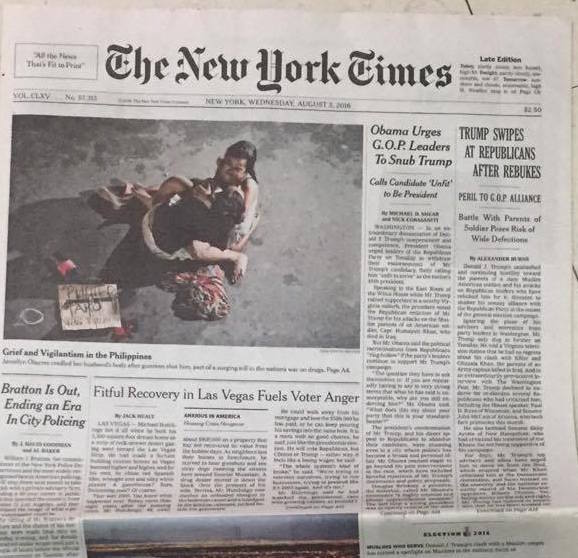 As the woman clutched her lost partner and screamed into the night, Filipino photographers dutifully captured what turned out to be some of the most powerful and iconic images of the drug war. The photos of the woman were compared by some to Michelangelo’s “Pieta” – a sculpture of Mary cradling the dead adult Jesus. Mr. Dancel’s image made it to the front page of The New York Times.

In the days since he took the photo, Mr. Dancel has been praised for his work, but nothing was more loud or clear than the woman’s voice. A week later, he could still hear her guttural howls.

“I felt very guilty. I had nightmares about that night,” Mr. Dancel said. “Sometimes I would be sitting down and I would hear her sobbing and asking me for help. I kept hearing how she wept and how she called out her partner’s name.”

At the Front Lines

The graveyard shift for crime beat photojournalists like Mr. Dancel and all reporters has taken on a new meaning since Philippine President Rodrigo Duterte launched his drug war over a year ago.

The numbers – from addicts to drug-related deaths – have long been uncertain and conflicting depending on the source, which led to serious debate within the country. But according to the Philippine Information Agency, there have been 3,967 drug ‘personalities’ who died in anti-drug operations from July 1, 2016 to October 25, 2017. During that time, 117,044 people were arrested for drug offenses and 77,468 anti-drug operations were conducted.

The bloody war that was the thrust of Mr. Duterte’s campaign no longer involves the Philippine National Police. Mr. Duterte named the Philippine Drug Enforcement Agency as the “sole agency” in charge,  and pulled out the police force following public outrage over the deaths of teenagers during raids in August.

During the time the police were still involved, journalists camped out every night at the Manila Police District awaiting the call that meant a new body had been found. Some nights they would never leave the station, but on most nights they raced from one crime scene to another across the capital. Sometimes the calls went on until early morning.

Witnessing one corpse after another wrapped in masking tape and haphazardly thrown on the sidewalk every night took its toll on journalists at the front lines. For some, the moral conflict was real.

Alecs Ongcal, a 22-year-old freelance photojournalist who is currently doing her thesis on the drug war, has tried to balance doing her job while still showing respect for the dead. She recalled a moment during one of her night shifts that was particularly emotional for her.

At one crime scene, Ms. Ongcal recalled, grown children had expressed their dislike for their father who had died that night. “Good riddance,” they supposedly said before they saw the body. But the moment their father’s corpse was brought out, the youngest daughter and eldest son forgot all about their anger, Ms. Ongcal told The Globe Post.

“It really hit me that given this kind of world, there’s really no more room for reconciliation for families like that,” said Ms. Ongcal, whose work has appeared in TIME and Al Jazeera.

Foreign journalists have also been assigned to cover the violence of the drug war. Freelance photographer Daniel Berahulak, whose work appeared in a New York Times piece titled “They Are Slaughtering Us Like Animals,” won the Pulitzer Prize for the images he had taken.

Mr. Berahulak was assisted in that piece by Filipino producer, researcher, and fixer Rica Concepcion. At 51-years-old, Ms. Concepcion has decades of experience covering and assisting foreign journalists from internationally-recognized outlets.

A widow for three years, Ms. Concepcion is familiar with loss, like many of the families that have been forced to confront it since July 2016, so she has empathy for people she comes across.

“It becomes more personal because you see the family of the victim,” she told The Globe Post. “Somehow I get flashbacks of those moments. It all mixes up with myself being a widow, the moment of dying, the moment when you find out and what you do. I picked up my strength from that. When there are families [going through that], as much as possible I go to them, I try to comfort them since I already have an awareness of a different kind of feeling.”

For Ms. Concepcion, working night shifts served a greater purpose as well, especially in the early days when there was great doubt about the killings. The New York Times piece was particularly rewarding “because I believe the story convinced Filipinos – not the foreigners, because they’ve known this a long time ago – that something is happening in our country,” she said.

Despite the horrors of the drug war, life continues for the families of people who died during President Duterte’s campaign.

Ms. Ongcal, the young photographer, ventured into communities and investigated what happened next for those left behind.

She witnessed the full grieving process of one widow in person and on Facebook. After her husband’s death, the woman, Ms. Ongcal said, got a tattoo and proceeded to take over his responsibilities. She continued running his motorcycle groups on Facebook and eventually became a full-fledged member.

“That’s when you realize that on a greater scale, if you hear it on the news, those deaths are just numbers. But when you’re one of them, if you’re actually talking to the family, it’s different. Very different. It’s hard for you to tell them that ‘no, your husband is actually someone,’” she said.

“There are so many stories that lie behind those people. How can you put a face in all of those individual digits in that big number?…You go back to the communities. We may not be able to cover everyone, but at least someone’s doing something.”

Ms. Ongcal’s most memorable photo from her drug war coverage is one she never released. It featured two kids playing, the caskets of their father and brother right behind them.

“It’s never easy,” she said. “This can never be a light situation. It will always be heavy in the heart.

A few days after the fateful July 2016 night, Mr. Dancel, the photojournalist, walked into the town hall where he formally met Jennilyn Olayres, the woman whose screams he could not forget. The government confirmed last month that her partner, Michael Siaron, was not killed by police, but by syndicates involved in the drug trade.

Mr. Dancel has since kept in touch with Ms. Olayres and occasionally visits. He does this with some of the other families he’s photographed as well. He said he’s already too involved, and he couldn’t simply walk away.

As Mr. Dancel connected with the families of the bodies he had once seen lying across Manila’s streets, a more sinister effect of the drug war started to become obvious to him.

“You sons of b——! One day I will kill you!” a child of around 12 years old screamed at police officers, Mr. Dancel recalled. The boy’s father was a casualty in this war, and he had been told the police were to blame.

“That’s when it struck me that this might become a huge problem someday, more than Duterte’s war on drugs at present,” Mr. Dancel said.

The boy wasn’t the only one he saw harboring anger and resentment towards the police, as family members assigned liability to the men in uniform. “It’s them, they’re the ones who killed your father,” Mr. Dancel heard several different adults tell the children left behind.

“They’re like ticking bombs and you don’t know when they would explode,” Mr. Dancel said talking about the minors. “And you have no idea just how strong that explosion would be.”

In an attempt to help defuse that anger, Mr. Dancel tries to reach out to children in various communities and make them feel cared for. He brings them snacks and spends time with them.

“I believe that’s what they need, to feel that someone still cares for them,” he said. “I think this is a big issue, those kids with trauma. Their anger doesn’t mean much now, but as they grow older, that anger also grows heavier.”

Tillerson: US Has 'Long List' of Additional Sanctions Against North Korea