Inside Look into China’s Most Ambitious Construction Project

by Aleksandra Urman
in Featured, World

BEIJING, China – In April 2017, the Chinese government announced the establishment of a new area of national significance — the Xiongan New Area. Beijing plans to construct a modern mega-city, similar to Shenzhen or Shanghai there. Right now it is still underdeveloped, but local residents have already started to experience changes in the region. However, it is still uncertain whether they are for good or for bad.

According to Morgan Stanley, the investment in the new area will vary from 1.2 trillion yuan ($182.5 billion) to 2.4 trillion yuan ($365 billion), making it the largest construction project in China so far in terms of projected expenses.

At present, the population of the area is around 1.28 million people. For the locals, the news of the large-scale construction project came out of the blue. Even the local authorities did not know about it beforehand, a Rongcheng County official told The Globe Post on condition of anonymity.

Right now the project is in its initial stage of development and Beijing is unwilling to disclose any details about it to the general public. Officials at the recently-established Xiongan New Area received an order not to talk to journalists, one of them told The Globe Post explaining their refusal to answer any questions.

Even though the implementation of the project has just begun, local residents can already see the changes in the area, some of which directly affect their lives. 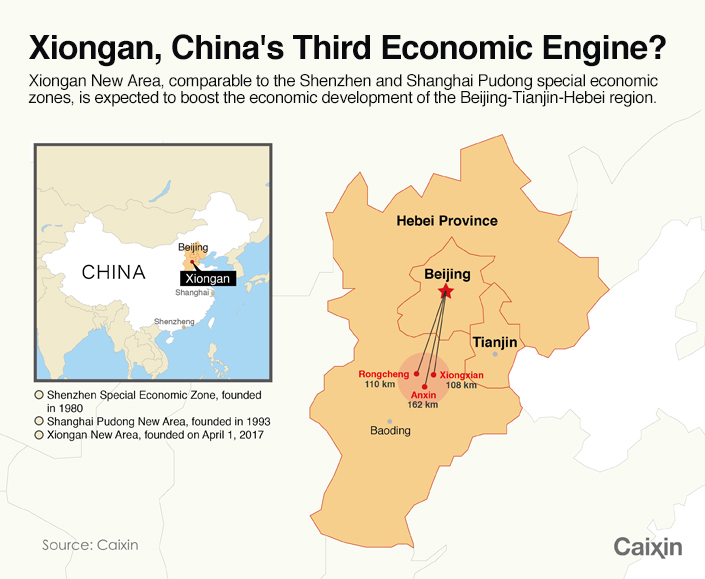 In the past several years, Beijing has been seriously concerned with environmental issues. The Xiongan New Area project is addressing those concerns: it will be environmentally friendly, with 70 percent of the area covered with vegetation and water.

The first steps to achieving this goal have been taken. In the first 12 days of November, 30 thousand trees were planted in the area. Several brigades of workers from the neighboring counties will have planted the total of 260 thousand trees by the end of the year.

“One brigade of workers can plant up to 2,000 trees a day. There are around 300 workers in each brigade,” Mr. Fuquan Zhao, a 63-year-old worker involved in the planting of the trees, told The Globe Post. Mr. Zhao, like the majority of other workers, lives in a neighboring county in Hebei. The commute to the planting site from his home takes about an hour. According to Mr. Zhao, the workers are paid around 3,000 RMB or $455 per month.

Beijing is actively pushing forward its environmental policies in the Xiongan New Area. Earlier this year, the government ordered all factories in the region that do not meet strict environmental standards to close down.

“There were 10 thousand small factories here, but after the regulation was passed only 100 could continue their operations,” a 23-year-old female worker at a plastic bag making factory that is located near Xiong county told The Globe Post on the condition of anonymity.

Tree planting and strict environmental measures might be beneficial in the long-run, but they come at the expense of local jobs. The land for the planting sites is taken away from the local farmers. They receive compensation for it, but it is relatively small.

The worker at the plastic bag making factory revealed that the government pays around 1,500 RMB ($255) for one mu (Chinese measure unit, equal to 0,66 ha) of land, and each farmer usually owns about 3 or 4 mu. The government also promised to pay additional compensation in the following years, according to the worker, but the exact sum of the compensation has not been revealed yet.

As the majority of the factories closed down in the Xiongan New Area this year, many people are now out of work. They usually do not have higher education, so the employment opportunities for them are quite limited. Mr. Yunlong Lin, a 30-year-old cashier at a small shop in Hongxilou village in Xiong county, told The Globe Post: “I used to work for a local factory, but it closed down this year because of the new regulations. I was lucky to get this job as a cashier. But some of the people I know had to move to other counties and provinces to work for the factories there because they could not find new jobs nearby.”

Another concern for the locals are the changes on the local real estate market. After the plans for the Xiongan New Area were announced in April, the real estate prices in the region soared. In order to curb the speculation on the market, the government has banned the selling of the real estate in the region and has taken measures to lower the rental prices that have risen as well. However, these measures are not enough, and local business owners are now struggling to pay their rent that has increased more than twofold since the beginning of the year.

“I used to pay 130 thousand RMB ($19,700) per year for the rent. Now I have to pay 500 thousand RMB ($75,900). Maybe I will have to close my business, and I have been running it for the last 11 years,” Mr. Jianpo Zhao, a 40-year-old director of a karaoke club in Rongcheng County, told The Globe Post. Mr. Zhao is not the only one struggling with the rental prices. Ms. Fang Hong, the manager of a donkey burger restaurant in Rongcheng, has shared the same concerns.

Still, both Mr. Zhao and Mr. Hong remain quite optimistic about the prospects for the new area. Mr. Zhao claimed he expects the government to take care of the rental prices, while Ms. Hong noted that since the new area announcement, more potential investors from other counties have started to come to Rongcheng.

The optimism of the local businesspeople is shared by other people who live and work in the Xiongan New Area.

“I wholeheartedly support President Xi Jinping’s guidance. I hope I will be able to see how our village changes in the next five years,” Mr. Yaowu Hu, an 80-year-old resident of Hongxilou village in Xiong County, told The Globe Post.

“I think more foreigners will be coming to Rongcheng in the next years, that is good. I hope Rongcheng will become as developed as Shanghai or Shenzhen regions,” Mr. Wang, a 23-year-old taxi driver in Rongcheng, told The Globe Post.

Mr. Wang is optimistic, though he, like the businessmen in the area, is struggling with rising prices. “I used to rent my taxi with the insurance for 20 thousand RMB per year ($3,000), and next year I will have to pay 30 thousand RMB ($4,500),” he noted.

According to the plans, the construction of the main infrastructure in the Xiongan New Area will be finished by 2022. In five years, local residents will likely find the place they live in completely different from what it is now. And they are looking forward to it, despite the troubles they may have to deal with while the transformation process takes place in the region.

Almost 70 Media Outlets Close in Venezuela in 2017, Attacks on Journalists Up