A handout photo provided by the office of Iran's supreme leader Ayatollah Ali Khamenei on January 2, 2018, shows him delivering a statement in the capital Tehran.

Iran’s supreme leader Ayatollah Ali Khamenei blamed the country’s “enemies” on Tuesday for days of unrest that have seen 21 killed and hundreds arrested in the biggest test for the Islamic regime in years.

The foreign ministry in Tehran also lashed out at U.S. President Donald Trump after his latest Twitter attack on the Iranian authorities over the protests, insisting he should focus on “homeless and hungry people” in his own country.

In a speech carried on state television, Mr. Khamenei broke his silence on the protests for the first time since they erupted last Thursday.

“The enemies have united and are using all their means, money, weapons, policies and security services to create problems for the Islamic regime,” the supreme leader said.

“The enemy is always looking for an opportunity and any crevice to infiltrate and strike the Iranian nation.”

A fifth night of unrest Monday to Tuesday saw six protesters killed during an attack on a police station in Qahderijan in the central province of Isfahan, state TV said Tuesday.

At least three other towns near the cultural hub of Isfahan also saw violence overnight, causing the deaths of a young member of the Revolutionary Guards, a policeman and a bystander.

The estimated death toll is now 21 since protests began in second city Mashhad and quickly spread to become the biggest challenge to the Islamic regime since mass demonstrations in 2009. 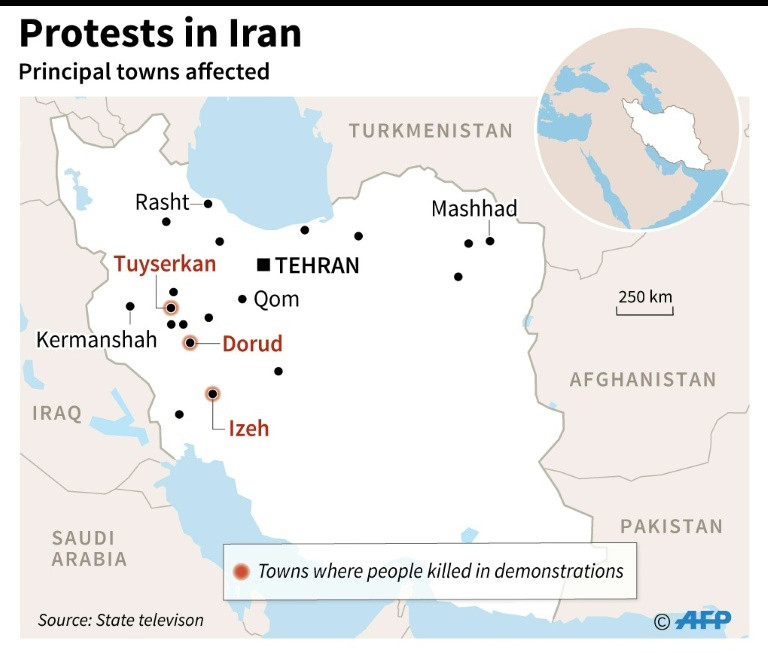 As violence has grown, authorities have stepped up arrests, with at least 450 people detained in Tehran since Saturday and 100 more around Isfahan on Monday, officials told local media.

U.S. President Trump, who has repeatedly criticised Tehran since the latest protests began, praised the demonstrators for acting against the “brutal and corrupt” regime and said Iranians had “little food, big inflation and no human rights.”

Iran’s foreign ministry fired back that the U.S. leader was “wasting his time sending useless and insulting tweets” and advised him to pay more attention to “domestic issues” in his homeland.

The unrest in Iran appears leaderless and focused on provincial towns and cities, with only small and sporadic protests in Tehran as a heavy police presence was reported.

Ali Shamkhani, secretary of the Supreme National Security Council, described the unrest as a “proxy war against the Iranian people” and said online accounts in the United States, Britain and Saudi Arabia are fomenting protests.

A Revolutionary Guards spokesman said the powerful force had not been requested to intervene directly, but insisted officials will “take decisions to finish” insecurity if it persists.

Iran’s reformist politicians condemned the violence and blamed the US for encouraging “troublemakers”, but also called on the authorities to address economic grievances that have fuelled the protests.

“Without doubt the Iranian people are confronted with difficulties in their daily lives… and have the right to peacefully demand and protest,” said a statement from the Association of Religious Combattants, headed by reformist ex-president Mohammad Khatami.

With Contributions by AFP

In Iran, ‘Anemic’ Response and US Sanctions Worsen Virus Outbreak

Coronavirus Now Well-Established in Iran: WHO

After ‘Hell’ in Libyan Jails, Migrants Reunite Aboard Rescue Boat

81 Killed in Violence After Death of Ethiopian Singer

‘All History is Contemporary:’ A 20/20 Look of the US Antebellum and Civil War

Mongolia’s Dance with Democracy: Some Steps Back and Some Forward

If You’re American, Racism Is Wired Into Your Brain

Say Their Names: How to Be a Better Human