by Aleksandra Urman
in Featured, World

BEIJING, China — China is already infamous for the most extreme internet censorship system in the world, and in 2018, the country will likely make it even harder for the netizens to get around the “Great Firewall.”

The long-term effects of increased censorship are yet to become clear, but so far government efforts have been quite effective in terms of making it difficult for people to find unfiltered information.

Currently, the Chinese government rigorously filters online content that Chinese netizens can view by blocking access to certain web resources. Google and its services, the Chinese version of Wikipedia, Facebook, Twitter and The New York Times are all blocked.

The authorities also monitor the Internet activity of regular users. With the help of elaborate computer algorithms and hundreds of human censors, the government of the PRC deletes public posts and even personal messages with “sensitive” content. The set of issues that are deemed sensitive by the authorities is quite broad.

“The most sensitive topics include, first, information regarding a set of politico-historical issues, such as 1989 student movement, Tibet, Xinjiang, Cultural Revolution, and fractional fights within the party.​ ​Second, messages that may serve to organize mass social protests offline,” Dr. Angela Xiao Wu, an Assistant Professor at The Department of Media, Culture, and Communication at New York University, told The Globe Post.

There are even special guidelines on the exact terms that are to be censored on the Chinese web. On the other hand, though the general set of “sensitive” topics is well-known, one can not always tell for sure whether a post or a message will be censored or not. According to Ms. Wu, “Usually critical comments on the government are tolerated and sometimes used as valuable information for the government to monitor public opinion.” 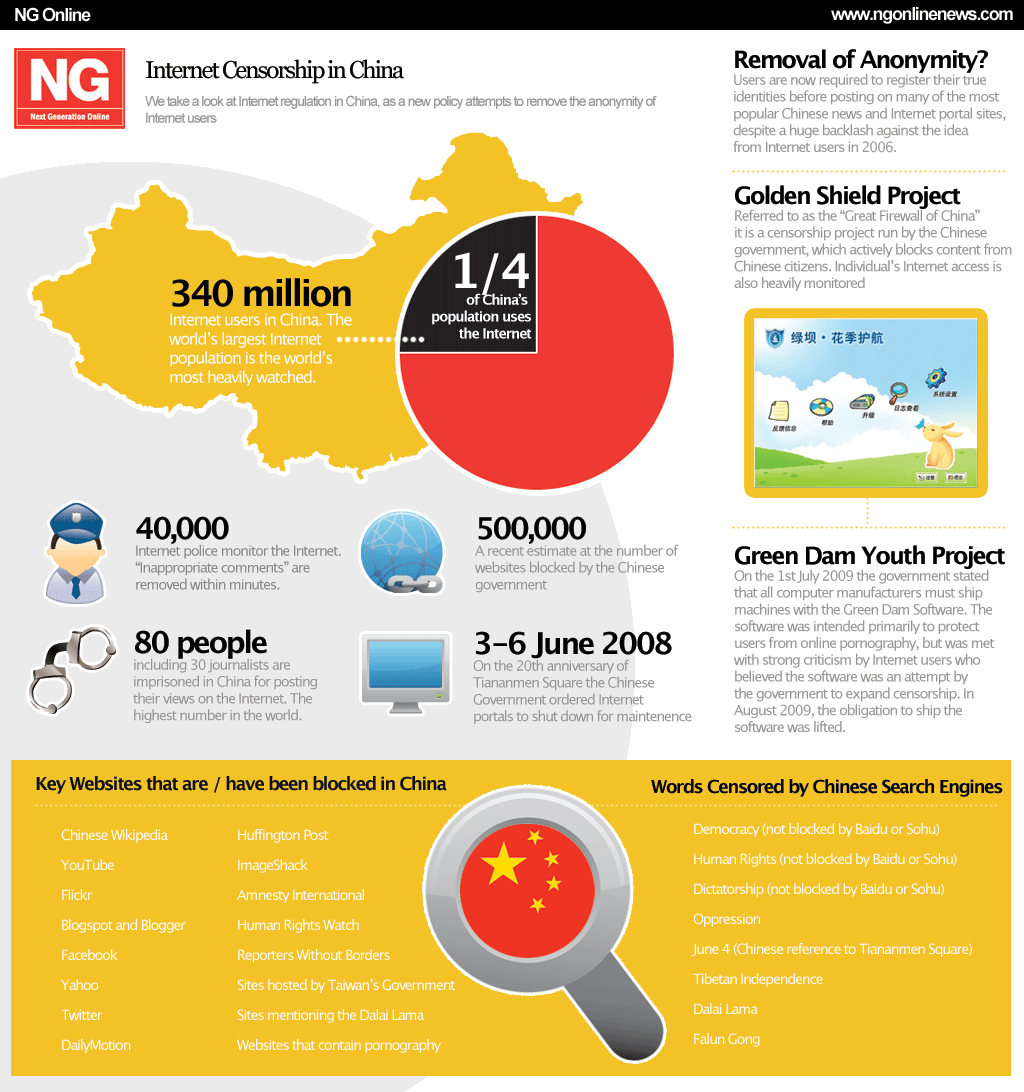 What makes the issue even more complicated is that the overall aim of online censorship in China, as well as its effectiveness, is quite ambiguous.

“There are terms regarding the purpose of censorship, such as national security, societal stability, and harmony. But all of them are vague, and how much they are influenced by China’s Internet censorship is difficult to say,” Dr. Yubo Kou, a Postdoctoral Research Associate at Purdue University, told The Globe Post.

Despite the fact that Chinese censorship system is quite strict, there are still ways to circumvent it. Avoiding censorship has become increasingly difficult during recent years, and it is expected to become even more difficult in 2018.

VPNs, or “Virtual Private Networks”, are one of the most common tools for netizens that wish to avoid censorship. The exact percentage of people who are technologically savvy enough to use VPNs, TOR, and other tools to access censored online content is very hard to estimate accurately according to both, Ms. Wu and Mr. Kou.

It is possible that VPNs could become completely useless in China during this year. In July 2017, the Chinese government ordered internet providers to block individual access to VPNs by February. If this plan comes into reality then it will become increasingly more difficult to access blocked content in China.

VPNs cannot prevent a message or public post from being deleted if it is deemed sensitive. Chinese netizens have to come up with creative ideas and solutions that have little to do with technology if they wish to avoid having their content be flagged.

For instance, they invent new ways to use non-sensitive terms in order to describe sensitive topics so that their posts are not censored by the algorithms. Lists of these words are sometimes found on the web. Of course, the words from these lists are quickly detected and added to censoring algorithms, and Chinese netizens have to come up with new ones.

Messages and posts that are not detected by censoring algorithms can still be detected by human censors. There are signs that in 2018 this aspect of censorship will also become more extreme. Tencent, one of the biggest tech companies in China, announced it would hire 200 more “content patrollers” to monitor web activity in the beginning of January.

These new employees would join others who already detect and delete “inappropriate” content on various online platforms that belong to Tencent. Among these platforms are news portal Tencent News, news aggregator app Tiantian Kuaibao, messaging apps WeChat and QQ, and video streaming service Tencent Video. It is especially worrying since WeChat is the most popular messaging app in China that has de-facto monopolized the sphere of online information distribution.

“WeChat has become a monopoly of information publication and distribution in China. Posts are constantly removed from the system and due to the app’s closedness, it is difficult to technically get around the censorship. Lots of strategies people may use on the web ceased to be effective,” Ms. Wu said.

The developments in Chinese online sphere might be worrisome. On the other hand, people in China are “cautious when they consume censored information,” Mr. Kou said. In her recent article, Ms. Wu similarly argues that Chinese netizens are suspicious about the information they find online.

An increasing amount of users become aware of government censorship as time goes on. Making it even tighter, in the long-run, might make Chinese people trust the information they encounter online even less. One can not say for sure whether increased censorship will backfire and make people question the official statements made by the government more frequently. What is clear, though, is that 2018 will be an even more challenging year for those Chinese netizens that wish to avoid the government’s reach.