by Fieke Snijder
in Democracy at Risk, Dont Miss, Featured

Poland is under the spotlight yet again: after the “death camps law” signed by the president last week, the upper house of the Polish Parliament is expected to vote on a law restricting kosher slaughter.

The draft version of the legislation has already passed the lower house. It may further complicate the relationship between Poland and Israel. The new regulations are springing up as the Polish ruling right-wing party continues to reform the country’s judiciary system.

The proposed law, a part of a larger legislative package concerning animal welfare, includes a ban on exporting kosher meat from Poland. The European Jewish Association said on Monday that the law “could affect many of Europe’s Jewish communities as well as meat prices in Israel.” In Poland itself, the bill has received virtually no attention from the press.

Professor Brian Porter-Szücs of the University of Michigan does not see where the idea for the law came from.

“Some animal activists argue that kosher methods should be categorized as animal cruelty, but I would be surprised if such concerns would worry anyone in the current government,” he told The Globe Post. “The ruling Law and Justice party (PiS) has not shown much support for environmental or animal rights issues.”

Mr. Porter-Szücs does not see the law as a deliberate provocation, however. “It seems more probable that it was a public relations mistake buried in a piece of legislation that the leaders of the governing party did not notice until it was too late, but that is speculating.”

Prior to the “anti-kosher” legislation proposal, Polish President Andrzej Duda signed into law a new regulation that imposes prison time for the misuse of the term “Polish concentration camps” or “Polish death camps.” Instead, they should be referred to as “Nazi death camps.”

Under the new law, it is illegal to suggest that Poland or Poles had any complicity in Nazi atrocities. The legislation caused a diplomatic row with Israel and angered Israeli Prime Minister Benjamin Netanyahu.

“We have no tolerance for the distortion of the truth, the rewriting of history and the denial of the Holocaust,” he said two days after the law passed the lower house of the Polish parliament.

A day later, Israel’s Ministry of Foreign Affairs called the timing of the law, which coincided with the eve of the International Holocaust Remembrance Day, “particularly surprising and unfortunate.”

The U.S. government has also expressed its concerns, saying the legislation “could undermine free speech and academic discourse.”

On Sunday, the dispute between the Polish and Israeli government further escalated after Polish Prime Minister Mateusz Morawiecki said Jews were among the Holocaust perpetrators.

Mr. Netanyahu said the Polish leader’s remarks were “outrageous” and showed the “inability to understand history.”

Israel continues to communicate with Polish authorities and has expressed its reservations regarding the new Polish law.

Israel has noted, that the Polish President had deferred the law to the Constitutional Court for clarifications and amendments. pic.twitter.com/QGr6i39LTA

According to Mr. Porter-Szücs, the controversy about the “death camp law” is grounded in something deeper than antisemitism.

“Kaczynski (co-founder of PiS) has long argued that one of the most important things any government can do is what he calls ‘historical politics,'” he said. “Kaczynski believes governments should use history lessons in schools and historical commemorations and films to teach people what a ‘true patriot’ should be like.”

These “lessons” include the portrayal of Poland as a victim of unrelenting aggression. “Such historical narrative is particularly important insofar as it depicts the nation as always threatened and vulnerable because, in such a context, liberal democracy becomes a luxury that the nation cannot afford,” Mr. Porter-Szücs said.

The “death camps law” demonstrates Poland’s nationalistic government’s incline towards populism, according to Filip Pazderski, a lawyer and policy analyst at the Warsaw-based Institute of Public Affairs.

“PiS plays in on people’s emotions,” he told The Globe Post. “By showing the bright parts of our past and hiding the gloomy ones, PiS tries to boost self-esteem and pride among Poles to gain political support.”

In 2015, PiS won parliamentary elections with an overall majority for the first time in Poland’s history. The party rose to power after eight years in opposition with a campaign that partly played on voters’ fears of the migrant influx. Since taking office, PiS has implemented a range of controversial judicial reforms. Brussels has said the measures had endangered the rule of law in the country.

One of the modifications, which amends existing law, mandated the appointment of five new judges to the Tribunal. It took the Polish Parliament three days to design the law, and after it passed, it got signed by the president on the same day. It went into force two weeks later, just over a month after PiS won the elections.

“Later on, as a result of this and further legal actions accompanying a yearlong dispute, PiS elected the majority of the Tribunal’s judges, as well as their president and her deputy. Nowadays the Tribunal actually issues its rulings however PiS wants it to,” Mr. Pazderski explained.

That was different in 2007, when the Constitutional Tribunal stopped a PiS-initiated bill similar to the recent “death camp law.” With the new law, PiS grabs back on decade-old ideas.

Eight days after signing the amendment allowing the Polish Parliament to elect all five new judges of the Tribunal, President Duda took yet another step. He signed a controversial amendment that makes it harder for the Tribunal to issue majority rulings. Critics say that the move, which was made after PiS had been in office for only two months, removes important checks on the government’s power.

PiS claims the judicial reforms are needed to remove corruption in the judiciary, but according to Teaching Fellow Thomas Hancocks of the University of Leeds, “there is a strong argument to suggest that PiS’s real motivation for the reforms is to consolidate its power, by reducing the chances of judicial resistance to policies and decisions.”

This signals that PiS is not committed to holding themselves accountable or to upholding the constitution, he told The Globe Post.

In the last two months of 2015, tens of thousands of people took to the streets in Warsaw because of the Constitutional Tribunal reform protesting against what they saw as a threat to the rule of law. The two amendments received criticism not only in Poland but abroad too. Martin Schulz, who was the President of the European Parliament at the time, called the political situation in Poland “dramatic” and said it had the “characteristics of a coup.”

PiS took no notice of the criticism and stayed on its course. In July 2016, the government implemented another law. The “Constitutional Tribunal Act,” combined with the amendments, paved the way for the political appointment of judges. Frans Timmermans, Vice-President of the European Commission, has said that despite half-a-year-long dialogue with PiS, “the main issues which threaten the rule of law in Poland have not been resolved.”

In July 2017, the Polish Parliament came up with three more bills related to the judicial system. The proposed legislation, which would put the Supreme Court under full control of the government, took worried Poles to the streets in Warsaw and dozens of other cities across the country. After the massive protests, President Duda vetoed two out of three controversial laws.

“Unfortunately, the bills adjusted by the President are even worse for the independence of the entities than the laws of July 2017 were,” Mr. Pazderski said.

For the past two years, the E.U. has been trying to counter these and other reforms carried out by the conservative, eurosceptic Polish government. The attempts have remained unsuccessful. After the implementation of the latest laws, the European Commission went up a step higher in a bid to defend judicial independence in Poland. On December 20, the Commission triggered Article 7, which has never been used before. This “nuclear option” could eventually lead to suspension of Poland’s voting rights in the European Council. 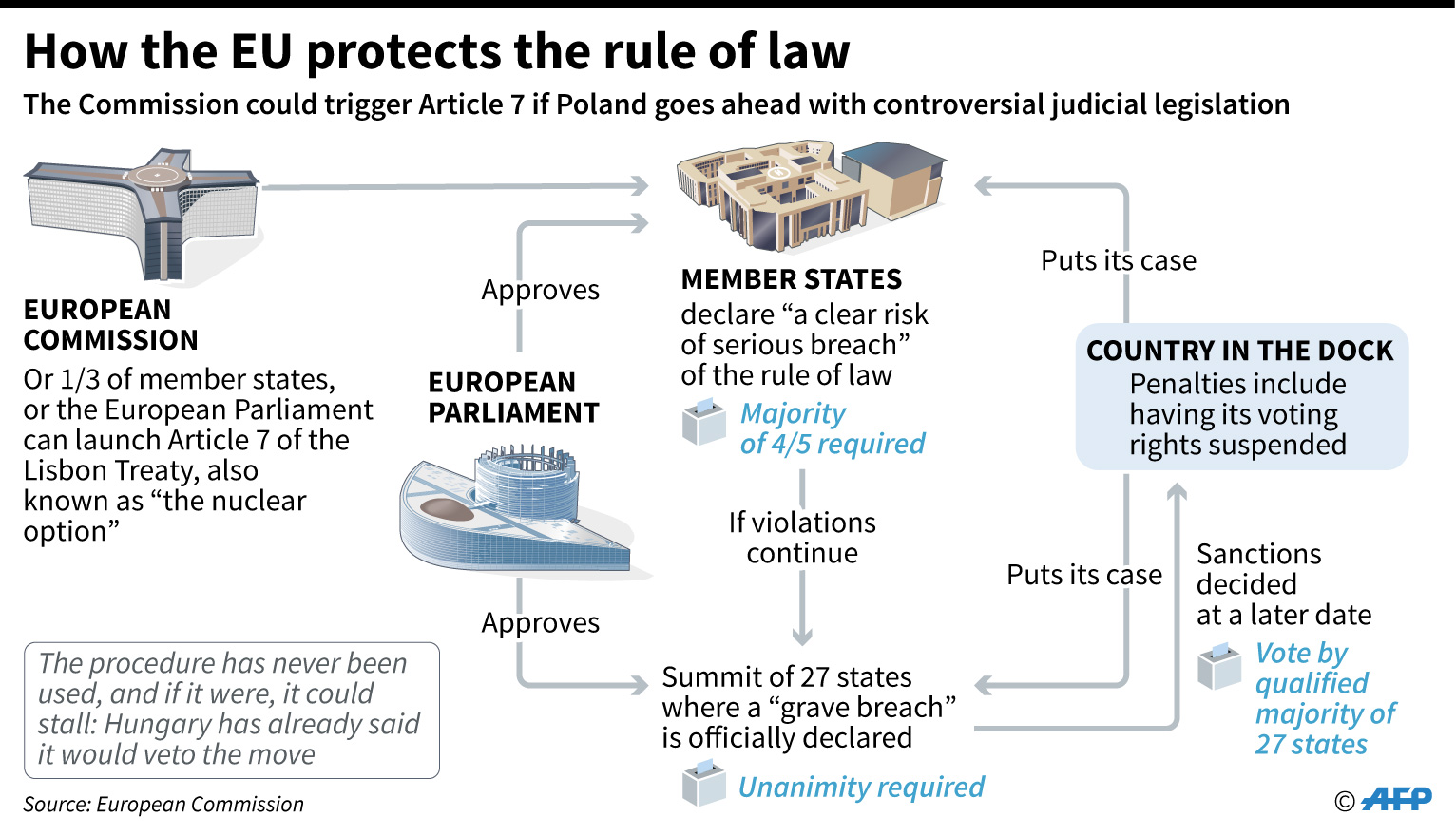 For years, Poland had been viewed as a successful example of European integration. But after PiS came to power two years ago, the country seemingly veered into a different path. With the ability of politicians to directly influence the legal system, “there is a clear risk of a serious breach of the rule of law in Poland,” E.U. officials say.

According to Mr. Hancocks, “One of the reasons the E.U. takes judicial independence and the rule of law seriously, is because they help protect citizen’s liberty. History tells us that when the rule of law is disregarded or when there is no independent judiciary, injustices happen, and civil liberties are curtailed.”

The “death camp law” proves that Poland has changed after the last election.

“The law can also be a problem in relations with the E.U., especially nowadays,” Mr. Pazderski said. “At the start of January PiS exchanged a part of the government, to create the image of being willing to change its policy, or at least being more open to dialogue with the E.U.” However, the “death camp law” does not seem to correspond with this image outlined by PiS.

Mateusz Morawiecki is one of the people swapped by the party. He became Prime Minister two months ago, after serving as the Minister of Development and Minister of Finance.

“What’s your take on the current relations between Poland and the E.U. amid the recent turmoil we have all witnessed?” he was asked three weeks ago at the World Economic Forum in Switzerland.

“It could have been better,” Mr. Morawiecki said. “I know that we have to explain better why we are having these reforms. Not only do I want to continue the dialogue. I want to enhance the dialogue.”

A day after the interview was published, the lower house of the Polish parliament passed the “death camps law.”

According to Mr. Pazderski, PiS’s strategy now is to save time and keep on talking with the E.U.

Since the European Parliament elections will be held in 2019, “PiS hopes that conservative, populistic parties become stronger in the European institutions,” he said. “In the meantime, they show the willingness for dialogue to buy time before Brussels starts thinking about following through on article 7.”

However, the dialogue between the E.U. and one of its biggest member-states has led nowhere so far. “Nothing has changed [regarding] the laws that are discussed with the European Commission,” Mr. Pazderski said. “I do not see this government taking a step back. I see them taking steps further.”