The march in memory of Boris Nemtsov on February 25, 2018. Photo: Maria Michela D'Alessandro

MOSCOW, Russia — On a freezing but sunny Sunday, thousands of people marched in central Moscow to mark the third anniversary of the murder of Russian opposition politician Boris Nemtsov.

The authorized rally started at 2 pm next to the central Pushkin Square: people walked down Strastnoy and Petrovsky Boulevards and reached Academician Sakharov Avenue around 3 pm, carrying Russian flags and photos of Mr. Nemtsov. Different slogans reflected the mood of the people who gathered for the march: “I am not afraid,” “Who ordered [the murder]?” and “Heroes don’t die.”

Prominent figures joined the rally attended by many ordinary Russians, including one of the leaders of the Solidarnost political movement Ilya Yashin, opposition leader Aleksey Navalny, presidential candidate Ksenia Sobchak, and co-founder of the Yabloko social-liberal party Grigory Yavlinsky.

It was at the end of the march when Ms. Sobchak, surrounded by journalists, said that the memory of Mr. Nemtsov would live forever.

“I’ll do everything in my power to keep his memory alive…In our country, people die just because they want to express what they think. This is called political repression, the lack of freedom,” she said.

The march united all kinds of people: young and old, women and men all walked together to remember the man who fought for freedom. 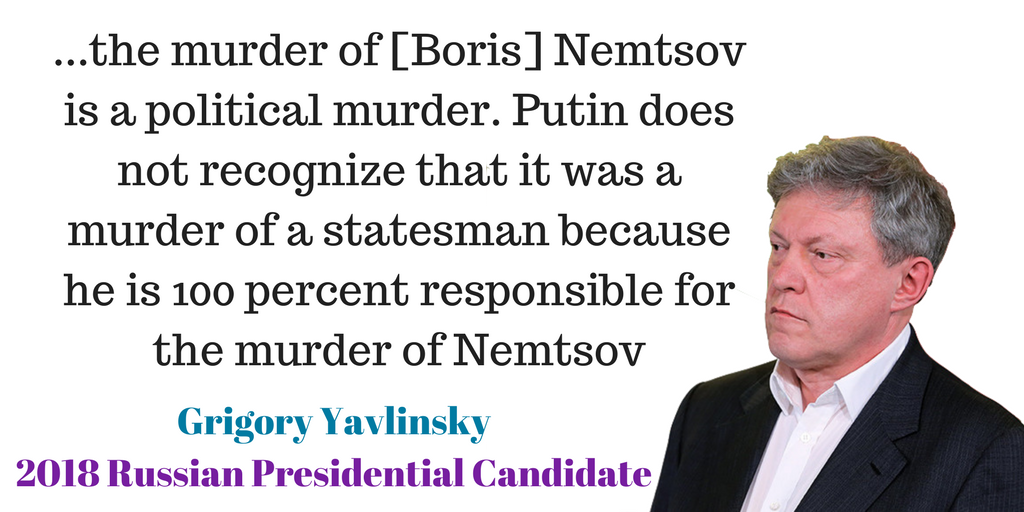 Viktor, a 72-year-old man, told The Globe Post that he had known Mr. Nemtsov since 1998. He came to the rally for the third year in a row.

“I am here because of democracy,” he said. “I would like to see Russia develop like any other country, such as Germany, United States or Italy. I would like to see the situation in Russia, in which we have been living for 18 years, finally, change.”

Viktor noted he would vote for Mr. Yavlinsky in the upcoming presidential elections.

Russian journalist and television presenter Mikhail Fishman expressed a similar point of view. In 2016, he co-authored a documentary about Mr. Nemtsov, dubbed The Man Who Was Too Free.

Mr. Fishman painted a grim picture of the current situation in Russia.

“The West is divided, his [Putin’s] approval rating is at its highest since Crimea, the internal opposition is depressed and defeated, Navalny is outplayed, cornered and isolated – the opposition coalition does not exist anymore,” he told The Globe Post.

“Nemtsov’s death surely adds to this desperation as he was always determined to unite Russian opposition. Putin knows that at the moment he has nothing to be afraid of,” Mr. Fishman added.

Karina, a 31-year-old participant of the rally, told The Globe Post that she came to the march because “Nemtsov was a true hero” and his murder was “a terrible loss for everyone.”

While smiling, she admitted that the political situation in Russia has deteriorated since Mr. Nemtsov’s death. 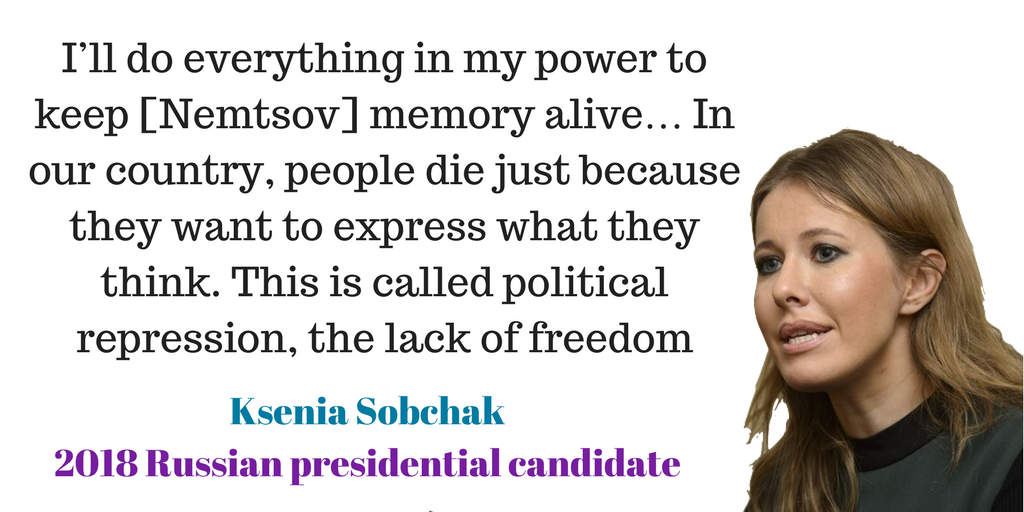 “He knew how to consolidate the opposition. He could turn on the fire of revolution, the spirit of protest. Without him it is not the same,” she added.

According to Karina, most of the politicians – apart from Ilya Yashin, Mr. Nemtsov’s political ally and one of the march organizers – took part in the rally just to show Russian media that they could be in opposition.

“I voted in 2012, but this year I won’t express my vote in the elections,” Karina said.

The overall number of participants in the Moscow event has not been finalized yet: while volunteer activists said it reached 7,600, the Russian Interior Ministry estimates cited by Interfax put the number at 4,500.

According to human rights project OVD-Info, three people were detained during the march.

Shot Dead in Front of the Kremlin

Boris Nemtsov served as deputy prime minister of Russia in the government of President Boris Yeltsin and later became a co-chairman of the Parnas party. He was gunned down in central Moscow on February 27, 2015.

Mr. Nemtsov, who was 56 years old, was assassinated on Bol’shoy Moskvoretskiy Bridge in front of the Kremlin and behind the Red Square, one of the safest places in the country.

According to investigators, Ruslan Mukhudinov, the personal driver of the top commander of one of Chechnya’s armed battalions, was the mastermind and the organizer of the murder. Being on an international wanted list since November 2015, Mr. Mukhudinov was charged in absentia. A criminal case against him is being investigated separately.