2018 Italian Elections: Another Populist Government in Europe? [Not Really]

by Indre Anskaityte
in Democracy at Risk, Featured

For over a decade, Italy has been gripped with a chronic economic meltdown, shrinking its economy by 7.2 percent while the eurozone expanded. The country also served as a bulwark for an uninterrupted influx of refugees through the Mediterranean. Add to this mixture an incompetent government, Italians voted last week for anti-elite and right-wing parties who promised lavish public spending and attractive flat tax rate. Does this mean another populist government in Europe?

The electoral outcome in Italy last week was not a surprise for anyone, but it laid bare the stark gap between the affluent North and impoverished South. The elections left behind a hung parliament and possibly months-long coalition talks, a mission impossible for a fractured society and polarized politics.

The populist Five Star Movement received 32 percent of the votes, meanwhile, the anti-migrant Lega (the League) party led by Matteo Salvini won 17 percent of the votes. However, despite their sweet victory, these parties will most likely not have an easy path to the government.

According to Lorenzo Pregliasco, a professor at the University of Bologna, the elections revealed wide support for the Five Star Movement in the south. “They were the strongest regions for the Five Star Movement in the last election as well, but this time it was much more evident. They managed to get 50 percent of votes in entire regions such as Campania or Sicily,” said Mr. Pregliasco.

In a country where nearly 5 million people are living in absolute poverty, Five-Star Movement’s promise to introduce a monthly minimum income of up to 780 euros ($960) for the poor found a ready audience in the south.

The migration crisis has played a role in these elections as well. Southern Italy has been an entry port for migrants mostly coming from Libya for a long time. 2015 and 2016, in particular, became a real test for this southern European country. It had to accommodate nearly 124,000 migrants only in 2016, 60 percent of whom did not qualify for a refugee status. “When everybody else closed their borders, a lot of refugees ended up in Italy,” sociologist Mabel Berezin from Cornell University told The Globe Post.

However, Ms. Berezin believes that political incapacity determined the Italian vote. “Traditional parties, particularly the center-left, could not offer valuable solutions to some of these problems,” the sociologist said.

The Democratic Party gained 19 percent of the vote in these elections — less than half their peak at the European Parliament elections in 2014. Former Italian Prime Minister Matteo Renzi had to step down as the party’s leader. Some of the Democratic Party’s votes were clearly taken by the League, which had usually been winning in the north, but this year it expanded its support to the center, a stronghold of the left. “This says something about the social changes in the country,” Mr. Pregliasco said.

He argued that the Democratic Party has changed its policy towards migration. For instance, Italy and Libya signed an agreement last year that aimed to slow down the arrival of migrants to Italian shores. “It shows that Italian public opinion wanted a buffer policy on immigration and this is something that center-right and the League support,” Mr. Pregliasco argued.

Before the elections, opinion polls and expert predictions favored Mr. Berlusconi’s Forza Italia. “People expected Berlusconi to win. People thought much to their distress that Berlusconi was going to pull them out of the particularly stressful moment in Italy,” Ms. Berezin said.

Surprisingly Forza Italia dropped below the Democratic Party, and the conservative former prime minister and billionaire, who was forced to leave the office in 2011 due to a number of legal battles involving corruption, fraud and sex offenses, lost his chance to form the coalition.

A possible coalition government led by the Democratic Party would have been messy and could cost the former ruling party its next elections — probably a major reason why they rejected to be part of the next coalition. This may allow the League to form the government, pulling Forza Italia to be its partner. Mr. Pregliasco said the League pulling ahead of Forza Italia was unexpected and that they received 13 percent more than their 4 percent performance in the previous elections. A grand alliance between the Five Star Movement and the League, which have starkly different programs, could potentially destabilize the country’s already turbulent politics. 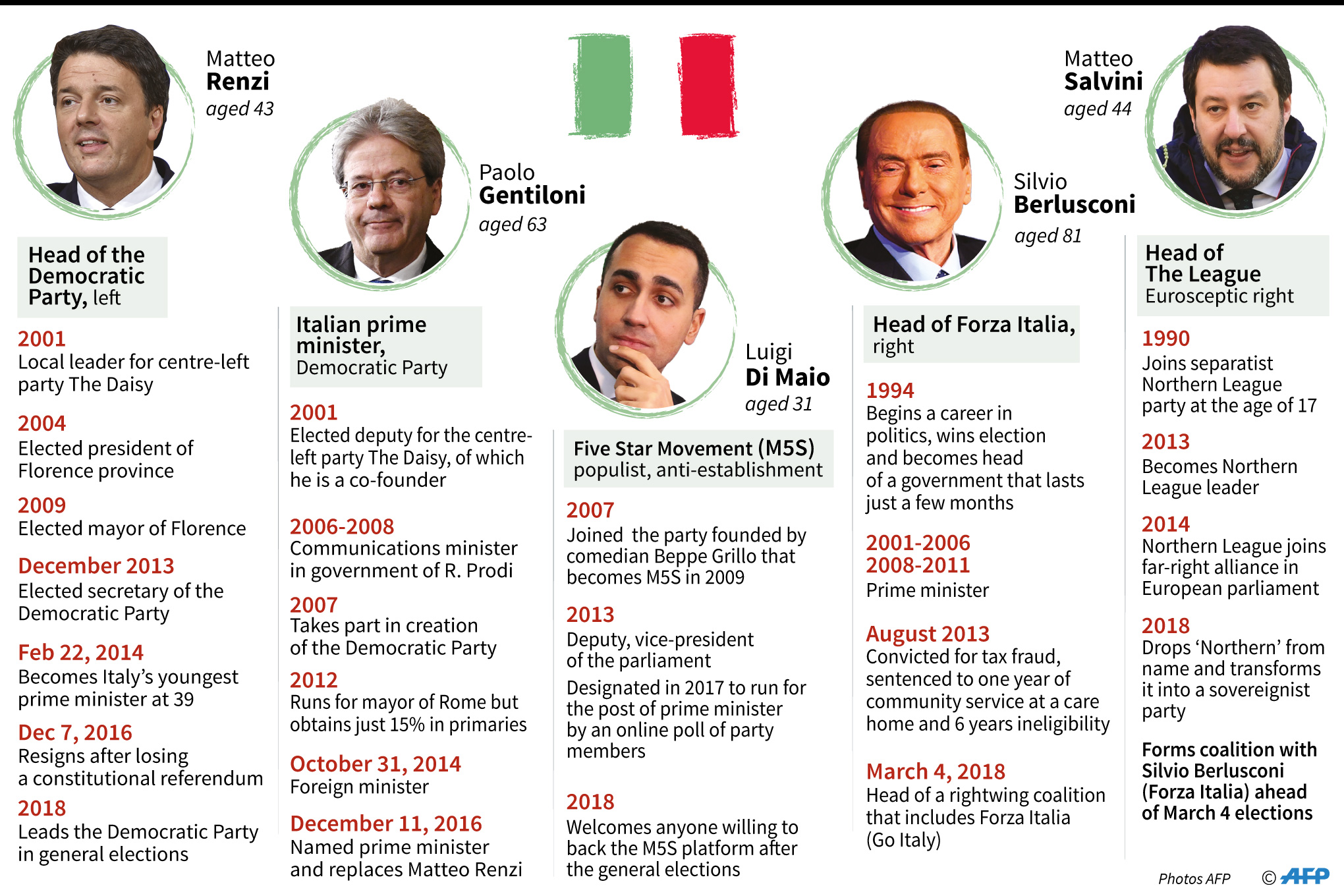 Both Five Star Movement and the League declared their intention to form the government. They will have to wait until the first meeting of the new Parliament, which is scheduled for March 23. “Both parties will struggle to get enough support to form a governing majority, particularly now that the Democratic Party seems to have called itself out of any possible government,” said Italian political scientist Enea Desideri.

Experts agree that the League and the Five Stars Movement stands the best chance of forming a government together. However, neither of the sides has expressed an interest in striking such a deal. “The League would be relegated to the role of junior partner in a coalition with the Five Star Movement and would probably compromise its chances to establish itself firmly as the leading party on the right end of the political spectrum in Italy. The Five Star Movement, for its part, risks serious damage by striking a deal with the League, as this would hardly be accepted by the ‘orthodox’ wing of the Movement,” Mr. Desideri told The Globe Post.

Ms. Berezin agrees that both parties will face difficulties in forming the government. She noted that the party which is more in danger to be boycotted is the League because its leader Matteo Salvini has made a lot of statements that are both ultra-nationalist and racist.

Mr. Salvini is increasingly viewed as the new leader of the center-right coalition. During the election campaign, he had expressed his support to the idea “Italy first,” a page ripped from U.S. President Donald Trump’s playbook and talked about “Italexit.” He also promised to remove all criminals, illegal immigrants and drug dealers from his country. Five Star Movement’s leader Luigi Di Maio, however, is 31 years old political novice, who has never been in any government position and who is a college drop out.

Days after the elections in Italy, a former chief aide to the U.S. president Steve Bannon said Italy is the “center of the world revolution. Mr. Bannon is currently touring Europe to encourage far-right and populist groups to challenge the establishment and mainstream parties.

Despite concerns that populist parties scored another victory in Italy, it is yet not clear if the new government will be composed of these populist parties. “If the Five Star and the League were to strike an alliance together, such a government would be extremely unpredictable and could potentially push for a radically different agenda,” Mr. Desideri argued, adding that in other cases, it is likely that governing partners would mitigate the most radical position of the Five Stars and the League.

Vincenzo Boccia, the 30th President of Confindustria, an Industrial employers’ group, described the electoral outcome in the poor south as “were a bit like our own Brexit.”

Unlike Britain, Italy has historically been favorable to the E.U. According to Mr. Desideri, the major risk might, in fact, be connected to a failure to follow up on the path of domestic reforms initiated in Italy. He said there could possibly be a revival of more eurosceptic positions if the government cannot deliver in the medium term economic promises and causes a financial slowdown.

Some observers have defined the elections result as a nightmare for the E.U., which could ruin French President Emmanuel Macron’s dreams of transforming the post-Brexit E.U. However, experts emphasize that Italy is historically a somewhat unstable country and the Euroscepticism of anti-establishment parties in Italy often tend to be exaggerated. Mr. Desideri asserts that while the League is certainly a Eurosceptic party, it is much more difficult to define the Five Star Movement as such.

Currently, around 35 percent Italians want to leave the E.U. Ms. Berezin said the wave of anti-E.U. sentiments is new and it is very much linked to the current migrant crisis. “Because people think that the E.U. abandoned them and unfairly put the burden of the refugees on Italy,” said Ms. Berezin. However, she does not believe that after chaotic Brexit, anyone would decide to take the same path