by Bryan Bowman
in World

British Home Secretary Sajid Javid on Thursday demanded answers from Russia after two more people were recently exposed to Novichok — a toxic nerve agent developed by the Soviet military during the Cold War that nearly killed a former double agent and his daughter in March.

Britain accused Russia of poisoning Sergei Skripal, a former Russian intelligence official who also worked with Britain’s MI6 spy service, and his daughter, Yulia, who were found unconscious on a park bench on March 4. The Kremlin has denied any involvement in the attack on the Skripals, suggesting British security services were responsible.

On Saturday, Dawn Sturgess, 44, and Charlie Rowley, 45, collapsed inside their home in Amesbury after mysteriously being exposed to Novichok. Sturgess and Rowley, who have no known links to Russia or any intelligence agency, remain hospitalized in critical condition.

Addressing the Parliament on Thursday, Javid called on Russia to explain how Sturgess and Rowley were exposed to the same strand of Novichok that poisoned the Skripals.

“The eyes of the world are currently on Russia, not least because of the World Cup,” Javid said. “It is now time that the Russian state comes forward and explains what has gone on.”

Javid added that it is “completely unacceptable” for the British people to be the subject of poison attacks, deliberately or accidentally.

“We have no information about which substances were used or how they were used,” Peskov told reporters Thursday. Russian foreign ministry spokeswoman Maria Zakharova on Thursday accused Britain of playing “dirty political games.”

“We urge British law enforcement not to get involved in dirty political games that certain powers in London have already begun,” Zakharova said. 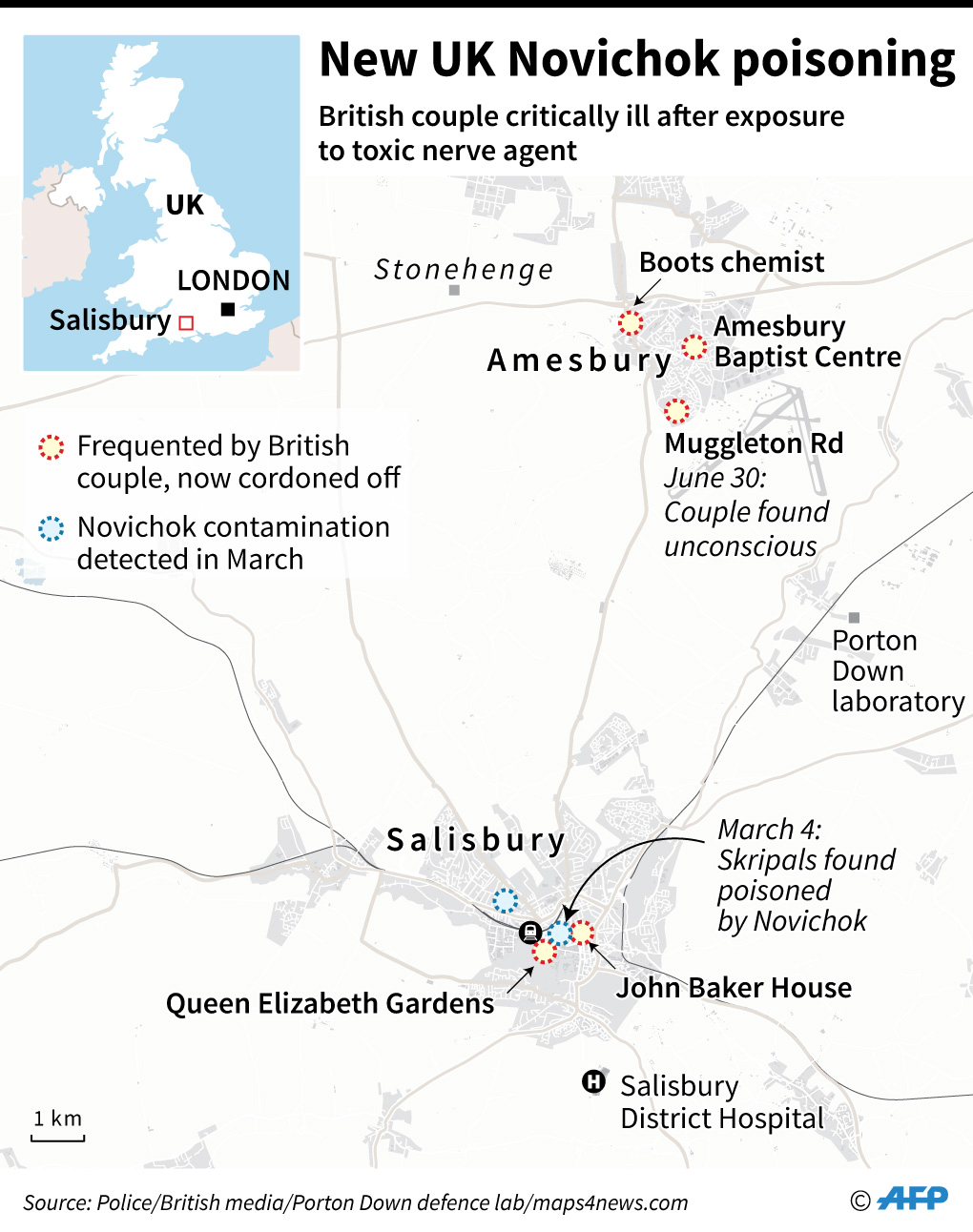 Sturgess and Rowley fell ill 11 kilometers (seven miles) from where the Skripals were poisoned in March. Authorities say the circumstances leading to the latest Novichok incident are not known at this time.

“Our strong working assumption is that they came into contact with the nerve agent in a different location to the sites that were part of the initial clean-up operation,” Javid said before the Parliament.

Vladimir Uglev, one of the men believed to develop Novichok, told the Independent that the substance is relatively stable and that it can persist in its toxic form for years.

Britain has notified the Organization for the Prohibition of Chemical Weapons (OPCW), the global chemical weapons watchdog, about the latest poisoning. Javid said that Britain will consult with its allies and consider a response if it concludes Russia is responsible for the latest poisoning.

“We don’t want to jump to conclusions but if it is established that the Russian state is entirely responsible for this as well, then, of course, we will be considering what further action we can take,” he said.

Can You Recover From Nerve Gas Poisoning?

In Whose Interest Was Poisoning of Former Russian Spy?