Dying With Dignity: A Glimpse at Physician-Assisted Suicide in America

by Miranda Saunders
in Lifestyle

The Netherlands and Belgium have been dubbed the suicide capitals of the world due to their notoriety for high rates of physician-assisted suicide (PAS) and euthanasia. Both countries are known for their incredibly lax prerequisites for a patient to receive euthanasia.

Loosely speaking, the main requirement is incurable, unbearable suffering, which, in many cases, even allows for children and the mentally ill to be euthanized.
Active euthanasia remains strictly illegal in the United States, although PAS is legal in seven states and the District of Columbia. While euthanasia is a doctor’s active killing of a patient through intravenous drugs, PAS is defined as suicide with the aid of a doctor, usually via prescribing lethal pills that the patient takes on their own accord.

In 1989, a breakthrough Supreme Court case, Cruzan by Cruzan v. Director, Missouri Department of Health, was the first instance the Supreme Court acknowledged the right to die as a privacy right. The Cruzan decision gave way to a broader discussion in the United States about whether or not the right to die and orchestrate one’s own death is a fundamental aspect of self-determination.

The controversy garnered even more media attention when Dr. Jack Kevorkian, A.K.A. the “Death Doctor,” became infamous in the 90s for assisting at least 40 people in the state of Michigan commit suicide. Kevorkian was never convicted of murder because of a loophole in Michigan legislation that failed to outlaw PAS. It wasn’t until he appeared on 60 Minutes, showing a tape of himself actively euthanizing a patient, that he received a 10-25 year sentence for second-degree murder.

The push for PAS gained even more momentum in 1997, when Oregon became the first state to establish legal procedures for PAS with the Death with Dignity Act. The legislation requires patients to receive a terminal diagnosis to die within six months, undergo a psych evaluation and waiting period, and then receive a second opinion on both the diagnosis and evaluation. Of the roughly 2,000 people in Oregon who have been prescribed the lethal pills, only around one-third have actually used them.

Many opponents of any legal aid in dying argue that euthanasia or PAS breeds abuse in cases involving the elderly, disabled, incompetent, and poor. Prescribing one lethal medication is less expensive than ongoing treatment, and these people are especially vulnerable to being pressured towards that alternative, particularly if they do not have adequate health insurance. In order to avoid such malpractices, Professor of Nursing at the University of Alberta and expert in end-of-life care Donna Wilson told The Globe Post, “Repeated verbal requests from the person are essential, and then also careful assessment of written applications for it, with care taken to assess for any coercion and also to determine if appropriate pain and suffering interventions have been tried.”

Other bioethicists believe that a revamping of healthcare systems is necessary to ensure that such vulnerable patients have the option of living with support, without feeling that they are burdening society and their loved ones.

“To prevent abuse/coercion, we need to ask the question of whether we have the right kinds of support in the first place so that people who do want to continue living can do so. PAS policies cannot be adequately assessed without also looking at other health-related and social policies,” Associate Professor at the Centre for Applied Ethics of the University of British Columbia Anita Ho told The Globe Post. 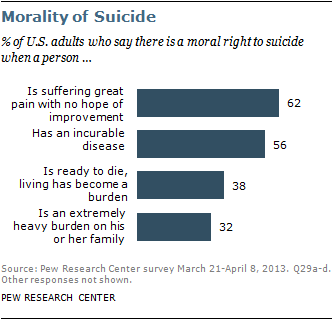 Legislators and doctors must also walk a fine line between protecting the vulnerable patients, and actually discriminating against them by not allowing them access to PAS.
“Restriction on the TYPES of people who can receive PAS would mean that we are categorizing a whole class of people[…] Blanket protection may ironically demean a whole class of people,” said Professor Ho.

She says that the system ought to require a mechanism for finding out the underlying reasons these people are requesting PAS, whether it be because they don’t have access to essential pain medications, or lack social support for some impairment or mental illness. “Providing PAS for people who are requesting it due to these reasons does not seem to be respecting their wishes — they want to live with support, not to die.”

Another strong opposition base is those who oppose PAS and euthanasia for religious reasons. Most religious denominations argue that all life is sacred and natural death should be preserved, and therefore, officially oppose medical assistance in death.

In 2016, Pope Francis called assisted suicide “false compassion,” saying that “true compassion does not marginalize anyone, nor does it humiliate and exclude – much less considers the disappearance of a person as a good thing.”

A 2013 Pew Research Center Survey revealed a strong correlation between end-of-life preferences and both religion and race. Religiously-unaffiliated adults were generally more likely to see a moral right to suicide as appropriate if the patient had an incurable disease, was in extreme pain that would not improve, or was a heavy burden on the family. White Catholics were more likely than Hispanic Catholics, and white evangelicals and black Protestants were generally least likely. 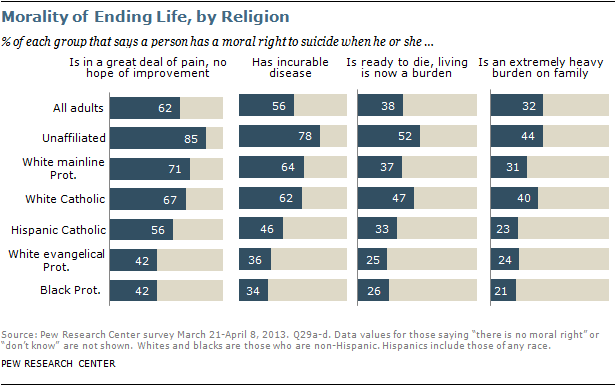 The religious protestors force the conversation towards an exploration of what truly makes a life valuable and worth living. Many worry that deteriorative illnesses that make them highly dependent on others rob them of the sort of autonomy they find necessary to continue a self-determinant life. The best way they find to gain back that control is to take matters into their own hands by ending life on their own terms.

Brittany Maynard, a 29-year-old woman who was diagnosed with terminal brain cancer in 2014, became an outspoken advocate for the right to die, partnering with the nonprofit Compassion & Choices to promote legalizing and increasing access to PAS in more states. In a testimony posted by Compassion & Choices just weeks before Maynard committed PAS, she said, “Achieving some control over my passing is very important to me. Knowing that I can leave this life with dignity allows me to focus on living. It has provided me enormous peace of mind.”

We Are Not Talking Enough About Suicide

COVID Stimulus Checks: Does Victory Include Abandoning the Most Vulnerable?