Look Good for Me: Sex and Gender Oppression in Beauty Industry

by Jaden Yocom and Lilly Thacker
in Opinion

The beauty industry teaches many women that being natural is equivalent to not being good enough. Photo: Atta Kenare, AFP

The beauty industry has existed for thousands of years, and its grip and influence over society is not difficult to observe. The industry’s roots lie in the idea that humans recognize each other’s beauty and that this is somehow an important aspect of their interaction. This becomes even more problematic when given an understanding of the inequality that is practiced alongside the industry.

Men benefit from this practice far more than women do. In fact, men exploit women on the basis of physical attributes and have since found ways to maintain this systematic power structure. Sex and gender inequality can be observed in every vestige of society: the pay gap persists, women are denied equal access to opportunity (for example in science, technology, engineering, mathematics, and politics), and sexual violence is continuously enacted with far more severe repercussions for the victim than the perpetrator.

The beauty industry does not differ in this aspect. For thousands of years, the sector has practiced oppressive behavior and has over time grown into one of America’s greatest economic mechanisms for inequality.

The beauty industry is valued at roughly over $400 billion. In 2016, in the United States alone, over $60 billion in revenue was produced by this massive sector. Given that this structure produces so much wealth and thus provides economic stimulation and jobs, many may remain purposefully ignorant of the consequences of an industry dedicated to obtaining wealth through human insecurity. This must be difficult because the negative impacts can be seen clearly in multiple contexts.

The first such context is in the scope of the beauty industry as an industry; that is, how does the business that stems from beauty vary in its treatment of men, women, and other genders?

Surface level research quickly reveals that men are the primary benefactors from this oppressive system. A look at the top 10 beauty companies in the world shows that 9 out of 10 have heterosexual male CEOs, despite the revenue from the beauty industry arising mostly from the spending of females or homosexual males.

Even when these companies employ women, it is nearly always in what political theorist Iris Young would call “powerless” positions: with little to no autonomy in making decisions for themselves or others. Whereas men always seem to be the people giving orders (like CEOs, managers, photographers, and advertisers), women always seem to be the people receiving orders (like secretaries, models, and low skilled laborers). 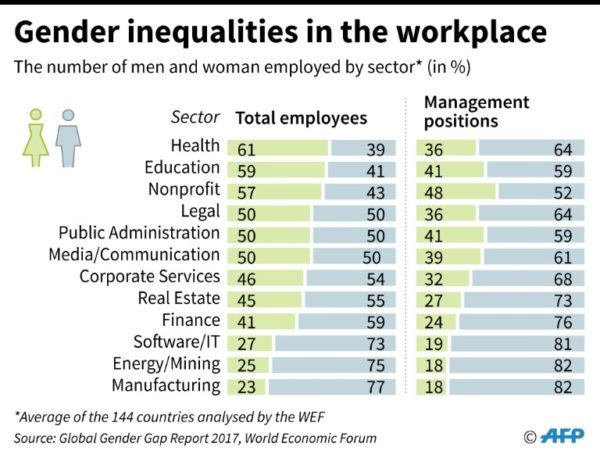 The second level that is essential to examine refers to the individual impact that the beauty industry has on women across the globe. Not only are women taught by society that they are only valued for their appearance and sexual and reproductive capacities, but they are then taught that even this is not enough for society, and they should spend money and time improving their appearance.

The consequences of these harmful ideologies are both observable and permanent. Women are twice as likely as men to have credit card debt (66 percent versus 33 percent) while simultaneously dealing with unequal pay, a problem that exists even in the beauty industry.

Beyond this, women are affected psychologically by what has been referred to by different names in the past. Historian and sociologist William Edward Burghardt Du Bois called it “double consciousness,” while film theorist Laura Mulvey provided the term “male gaze.” The essence of these concepts is the same: oppressed individuals see themselves both through their own ideas and identity as well as through the eyes of their oppressors and an ascribed identity.

The beauty industry is an especially severe proponent of double consciousness, as it teaches many women that being natural is equivalent to not being good enough. Women who don’t wear makeup are often stereotypically perceived as more masculine and less expressive. Society greatly shames and shuns women with unshaven body parts. Women of all backgrounds are subject to unrealistic and unfair views on beauty as a result of patriarchal oppression.

From these two categories of oppression, it is abundantly clear that the beauty industry is in desperate need of business and cultural reform. Women must be considered as more than just objects for viewing or sexual pleasure and childcare.

An objective examination of beauty as both a business and a cultural practice at an individual level has shown that men benefit from these instances of oppression while women and non-heterosexual males suffer. It is time that change stops being asked for and starts being taken.

The beauty industry’s historical significance and position in society and economics will make it difficult to alter drastically, but over time and through personal and political action, these necessary changes will occur.

Disclaimer: The views and opinions expressed here are those of the author and do not necessarily reflect the editorial position of The Globe Post.
Share3Tweet

by Matt Helder and José A. Cabrera

Why Today’s Feminists Must Build Bridges With Other Social Movements

Retaken But Not Rebuilt: Syria's Raqqa a Year After IS Ouster