by Louis Monroy-Santander
in Opinion

Bosnia and Herzegovina’s socio-political environment has permitted ethnic harassment, intimidation, and increasing ethnic divisions amidst social reconstruction. The nation voted in general elections earlier this month, and while the international community urged participants to refrain from divisive rhetoric, the campaign saw candidates gearing towards their own ethnic communities. The outcome is unlikely to ease the tension, as leaders continue to revive the country’s history to divide the nation for their own benefit.

After almost four years of devastating war, the Dayton Accords ended the Bosnian conflict in 1995. The peace agreement and its constitution split Bosnia into two entities: the centralized, mainly Serbian Republika Srpska and the Bosniak-Croat Federation. These entities share a common state-level presidency comprising of three members, one from each ethnic group. 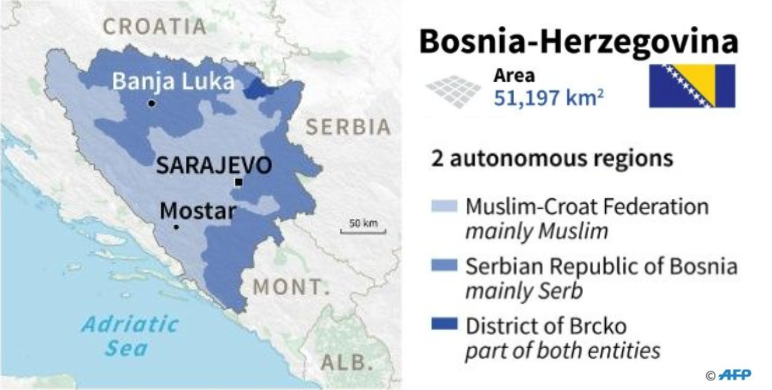 The elections of October 7 were the 8th after the war and were marked by allegations of fraud and manipulation of identities of deceased people who have remained in the registration systems.

Representatives of Bosnia’s agency for identification documents have reported that before the election, the number of valid ID cards for citizens aged 18 and above did not match the number of voters registered for the elections. Such discrepancies are often cited as lack of coordination between police bodies issuing ID cards and registry offices keeping records of citizenship and death index.

Concerns were also expressed regarding the lack of media access and opportunities for women’s participation.

Quite recently, Dodik supported a controversial referendum to establish a ‘Republika Srpska day’ on January 9, marking its founding in 1992, often seen as a trigger of the war.

Such proposals make part of Dodik’s ongoing confrontation with the state government in Sarajevo and the international community. Being backed by Kremlin, broadening links with extremist groups in Russia show his closeness to the Moscow regime, and a capacity for internal confrontation between his party and the political opposition in Republika Srpska.

An issue marking the October 7 election has been the “Justice for David” movement, a series of protests over the death of 21-year-old David Dragicevic. The police initially reported his death as a fatal drowning, but the case is now treated as murder. David’s father blames the Republika Srpska’s Ministry of Interior, presidency, and government for knowing what happened to his son, whose death is rumored to be related to a clash between the young man and one of new Serb president Dodik’s closest links.

David’s death sparked a range of protests lasting for more than six months and has become a major element in the political conflict between opposition’s Serbian Democratic Party and Dodik’s party.

The Bosniak seat was won by Sefik Dzaferovic. Provincial clashes and corruption have driven Bosniak politics for years.

Dzaferovic’s Party of Democratic Action (SDA) has turned into a channel for personal enrichment for founder Alija Izetbegovic’s family, including his son Bakir.

Dzaferovic, vice-president of the party, replaces Izetbegovic’s son Bakir as Bosniak president, continuing an ongoing tradition of this party winning the Bosniak presidency seat since 1996.

Social Democrat Zelijko Komsic won the Bosnian Croat seat. His election sparked protest. Many towns in southwest Bosnia declared Komsic “unwelcome” and even Croatia’s government publicly criticized his election. A concern expressed has to do with the existing political and electoral system which allows Muslim Bosniak citizens to vote for the Croatian presidential seat, an assertion made directly by Komsic’s predecessor in the Croat seat, Dragan Covic.

Corruption, a weak economy, and ethnic divisions are huge barriers to Bosnia’s development. The country’s unemployment rate reaches 40 percent, with youth facing even higher rates. Salaries average around €400 ($460) a month. About 200,000 Bosnians have left the country in the last five years, searching for better opportunities abroad.

Economic issues and the promise of more jobs are essential to many parties’ platforms, yet plans for improving the economy are often vague.

Bribery, nepotism, and embezzlement are a constant challenge, and although political discourses promise to deal with such problems, politicians often benefit from such a scenario, with little incentive towards change.

The main barrier resides in the inability of constitutional reform in Bosnia and Herzegovina, mainly due to political deadlock between ethnic parties and their members within state institutions. The co-option of ethnopolitical interests within Bosnia’s institutions has made it stagnant and unable to move forward in political and socio-economic reforms. Bosnia’s politics continue to revolve around ethnic leaders reliant on fear and revitalizing the past to divide and profit.

The institutionalization of wartime ethnic divisions, via Dayton’s constitution and its political arrangement, permits this thriving of ethnic politics and interests in Bosnia and Herzegovina, leading to political practices of revisiting the past, genocide denial or even the praising of war criminals as war heroes within their ethnic communities.

Due to this state of affairs, citizen protests have occurred since 2013 denouncing political corruption, yet no election so far has shown signs of change from the usual ethnic politics.

Disclaimer: The views and opinions expressed here are those of the author and do not necessarily reflect the editorial position of The Globe Post.
Share87Tweet

Teaching Fellow in Defence, Development and Diplomacy in the School of Government and International Affairs, Durham University, UK

For Migrant Caravan's Children, a Long Trek to a Murky Dream