by Dina Badie
in Opinion

Israeli Prime Minister Benjamin Netanyahu claimed that the American decision to recognize Israeli sovereignty over the Golan Heights “proves you can” keep occupied territory. He is right. Combined with last year’s Jerusalem declaration, the decision could encourage Israel to begin annexing territory in the West Bank. This would permanently extinguish any remaining possibility for a two-state solution.

Israel seized and occupied the Golan Heights from Syria, and East Jerusalem and the West Bank from Jordan in the course of the 1967 War. United Nations Resolution 242 passed immediately and unanimously to endorse a “land for peace” agreement that would exchange Arab peace and recognition of Israel for a return of occupied territory. Neither side wanted to act first. As a result of the diplomatic stalemate, Israel continued the occupations and began building Jewish settlements on the newly controlled lands.

By 1981, Israel annexed the Golan Heights and East Jerusalem by extending its law and jurisdiction into both territories, indicating an intention to permanently expand its borders to include them. Syria condemned the annexation of the Golan Heights and Palestinians denounced Israeli sovereignty over East Jerusalem, which they consider the capital of a future Palestinian state. 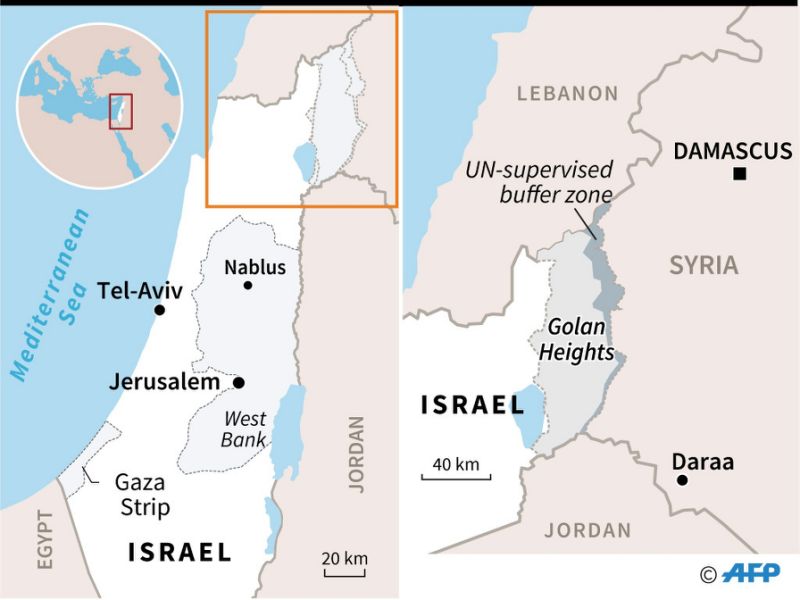 The United Nations Security Council responded by passing Resolution 497, rejecting the annexation of Syrian territory as “null and void and without international legal effect.” On the question of East Jerusalem, the international community, including the United States, pointed to Resolution 242, suggesting that the final status of the city should be decided by negotiation rather than by unilateral declaration. Foreign embassies, therefore, continued to reside in Tel Aviv instead of Jerusalem.

In 1995, Congress moved to shift U.S. policy by passing the Jerusalem Embassy Act, which recognized the city as Israel’s indivisible capital and called for the relocation of the American Embassy to Jerusalem. The bill passed with overwhelming bipartisan support. To encourage continued peace talks between Israel and the Palestinians, President Bill Clinton invoked a clause within the law that allowed the issuance of a six-month waiver, which was then repeated for the next 22 years under the Clinton, George W. Bush, and Barack Obama presidencies.

When Donald J. Trump won the 2016 election, he moved quickly to fulfill his campaign promise to formally recognize Jerusalem as Israel’s capital and to relocate the American embassy to the contested city. The decision reversed decades of consistent U.S. policy that encouraged negotiations as the avenue to resolving territorial disputes, including on the status of Jerusalem. Palestinian leaders have since refused to meet with American officials, meaning that their voices will be notably excluded from Trump’s Middle East Peace Plan.

Despite broad international consensus that the West Bank is part of a future Palestinian state, an accommodating president in Washington could prompt the next Israeli prime minister to begin annexing parts of it. A recent Ha’aretz poll found that 42 percent of Israeli respondents support annexation of at least parts of the West Bank. Prominent Israeli leaders, including some from the prime minister’s own Likud Party, endorse the idea and Netanyahu’s main election rival, Benny Gantz, hasn’t ruled out the possibility of partial annexation.

Even if it makes a future Palestinian state geographically inconceivable, annexation of West Bank territory will not be met with serious pushback from the Trump administration. If anything, the Jerusalem decision and now the Golan Heights announcement demonstrate that continued Israeli occupation and annexation of land can eventually lead to recognition of Israeli sovereignty over the disputed territory.

While the two-state solution may have already been on life support, annexation of the West Bank will, regrettably, pull the plug.

Disclaimer: The views and opinions expressed here are those of the author and do not necessarily reflect the editorial position of The Globe Post.
Share7Tweet

Associate Professor of Politics and International Studies at Centre College, Kentucky. She is a scholar of American Foreign Policy and the Middle East and is currently writing a book about the Arab-Israeli conflict

No Smoking Gun in Mueller Probe, but Other Investigations May Hinder Trump's 2020 Bet