by Paul Knott
in Opinion

Trump declared the 2015 nuclear deal with Iran is no longer in the US national interest. Photo: Brendan Smialowksi, AFP

President Donald J. Trump’s decision to renege on the Iran nuclear deal has considerably ramped up the risks of the U.S. being drawn into another bloody conflict in the Middle East. Even if war is avoided, the “maximum pressure” policy the U.S. has adopted towards Iran since withdrawing from the deal is increasing tensions and unlikely to produce any positive results.

The Trump administration dislikes the agreement (known formally as the Joint Comprehensive Plan of Action – JCPOA) because it does not put a permanent stop to Iran’s nuclear program. It also does not address the separate issue of Iran’s interference around the Middle East. However, while the deal is not perfect, it remains the best available option.

The deal prevents Iran from producing the materials required to develop a nuclear weapon for at least ten to fifteen years. Iran’s full compliance with the terms has been certified by the most intrusive inspection regime ever implemented by international nuclear watchdog IAEA.

This remarkable diplomatic success is now in grave danger. On May 8, Iranian President Hassan Rouhani declared an end to the “patience” Iran initially showed after the U.S. withdrawal. He said the deal was not providing the economic benefits Iran was promised and that the other signatories, particularly the E.U., needed to do more to deliver them. If not, Iran would soon stop abiding by certain aspects of the agreement.

The collapse of the agreement would rapidly return the world to the tense situation that prevailed during the years before the deal, with Iran unconstrained in its pursuit of a nuclear weapons capability and close to achieving it. This, in turn, would revive the risk of a nuclear arms race in one of the world’s most unstable regions and likely prompt Iran’s rivals such as Saudi Arabia to seek atomic weapons too.

But, as many senior defense officials and experts in the U.S., Israel, and around the world asserted during the years before the JCPOA, this threat would prompt Iran to move its nuclear facilities to secret, mostly underground, locations. Even if detected, such sites would be almost impossible to destroy militarily, nor can Iranian scientists’ nuclear knowledge and their ability to rebuild the program be eliminated by bombing.

The dangers of such bellicosity become even more graphic when one considers the likely reaction of the Iranian military, its militia allies across the region such as Hezbollah, and countries like China and Russia, with whom Iran has good relations.

Iran’s Regime and US Withdrawal from JCPOA

There is no doubt that the actions of the Iranian regime are often odious. It has been instrumental in propping up the appalling Bashar al-Assad dictatorship in Syria. Iran has been implicated in terrorist attacks, such as the bombing of a Jewish community center in Buenos Aires in 1994, which killed 85 people. It aids and abets extremists across the Middle East, increasing instability in countries such as Iraq, Lebanon, and Yemen.

The JCPOA did not address these matters because it became clear during the complex, decade-long negotiation of it that straying beyond the nuclear issue would render any agreement unattainable. Instead, it was hoped that the trust and cooperation engendered by the JCPOA process might make it possible for these issues to be addressed in the future. 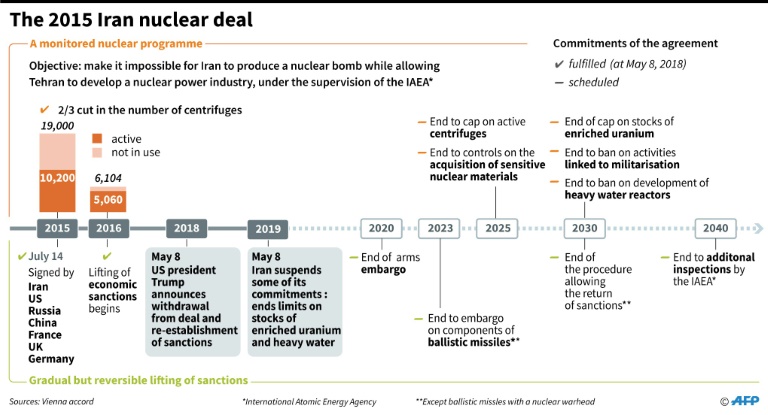 The U.S. withdrawal from the JCPOA does nothing to reduce Iran’s malign influence in the region. Rather, it increases Iranian distrust of the U.S. and reinforces Iran’s belief that its external activities are an essential element of its defense against potential American attempts at regime change in Tehran.

In so much as the U.S. administration’s “maximum pressure” strategy has any coherence, its aim appears to be either causing the Iranian regime to collapse or bringing it back to the negotiating table desperate to do a wider-ranging deal on Trump’s terms.

It is not clear why renewed U.S. economic sanctions would achieve that objective now when they failed to do so for years before the JCPOA was agreed. Indeed, the sanctions seem even less likely to succeed than before because this time they are not supported by U.S. allies or any other major nations.

Instead, the embargoes will only increase the suffering of the Iranian people, whom the U.S. purports to support, and make it easier to whip up anger amongst them against America.

Equally, nothing in recent Iranian history suggests that its armed forces are likely to succumb to military pressure without putting up an almighty fight.

Trump’s Iran strategy is blind escalation. There is no endgame. No overriding strategy. No way out. It’s just escalation for the sake of escalation.

That’s wildly dangerous and inexcusably dumb, in that order.

Politically, the U.S. withdrawal from the deal and imposition of pressure is strengthening the hardliners in Iran and weakening the moderates who seek better relations with the West. The hardliners opposed the agreement from the start, partly on the grounds that the U.S. could not be trusted to stick to a deal. Trump has proved them right. Worse still, he has reinforced the argument against getting into further negotiations about other issues with an unreliable U.S. partner.

The moderate Rouhani staked his presidency on the deal bringing desperately needed economic benefits to Iran from sanctions being lifted and frozen assets overseas being returned. His announcement to end patience because the deal was not providing the economic benefits his country was promised is an admission that his strategy had failed to deliver and that he needs to tack in the hardliners’ direction to appease them.

The one small ground for hope is that Rouhani has managed to do so in a way that preserves the agreement for a little while longer. Instead of withdrawing immediately from the JCPOA, he set out steps for steadily reducing Iran’s compliance with it.

The final death knell for the deal will ring if Iran re-starts enriching uranium to the level required for a weapon. Rouhani said enrichment would recommence in 60 days if no progress was made with the Europeans, Russians, and Chinese on the economic aspects of the JCPOA.

The Europeans have already created a financial system to protect companies trading with Iran from U.S. sanctions, limited initially to humanitarian goods. This program has yet to convince many firms to risk their more lucrative U.S. markets for the sake of trade with Iran. But the 60-day deadline does at least keep the window ajar for developing other ways to keep the deal limping on. Such measures might include mechanisms for Iran to maintain some of its vital oil exports.

Rouhani’s preference is clearly to keep the JCPOA alive, even if only on life support, at least until the end of 2020, when Trump might be removed from office and U.S. policy could change. Crucially, the indications are that his wish is shared, for now, by the harder line and ultimately all-powerful Iranian Supreme Leader Ali Khamenei.

In the meantime, the grave danger is that both the U.S. and Iran appear to be preparing themselves for conflict. The military build-ups and belligerent rhetoric from both sides is alarming. Even if neither presidents really intend to start a war, the risk is high that one could be sparked by a miscalculation or misunderstanding between two countries that have almost no diplomatic contact.

Scarily, some senior figures in the Trump administration, such as Bolton, seem to relish that prospect.

Religious Repression and Cultural Decimation: Spare a Thought for Uyghurs this Ramadan