by Andrew Tchie
in Opinion

While Sudan is no stranger to uprisings and the latest upheaval has resonated with all members of Sudan’s society, history proves that civilian-led governments do not tend to last in the African country. With tensions between protestors and the transitional military council rising, a common fear is that things could get worse before they get better, preventing democracy from taking root and allowing chaos to settle in.

Despite powerful generals and opposition leaders agreeing in principle to the formation of a joint civilian-military council, Sudan’s uprising faces several challenges if it is to reach an agreement that ushers in democracy.

Protests have been facilitated by a coalition of groups mostly represented by the Sudanese Professional Association. This association enjoys support from several political parties that joined the call to oust President Omar al-Bashir.

These parties come together under the Freedom and Change Coalition, which consists of over 22 political parties, trade unions, youth movements, and civil society groups. While the coalition has agreed on an agenda, there is disagreement about who should represent and lead the civilian transitional government and who should be included. 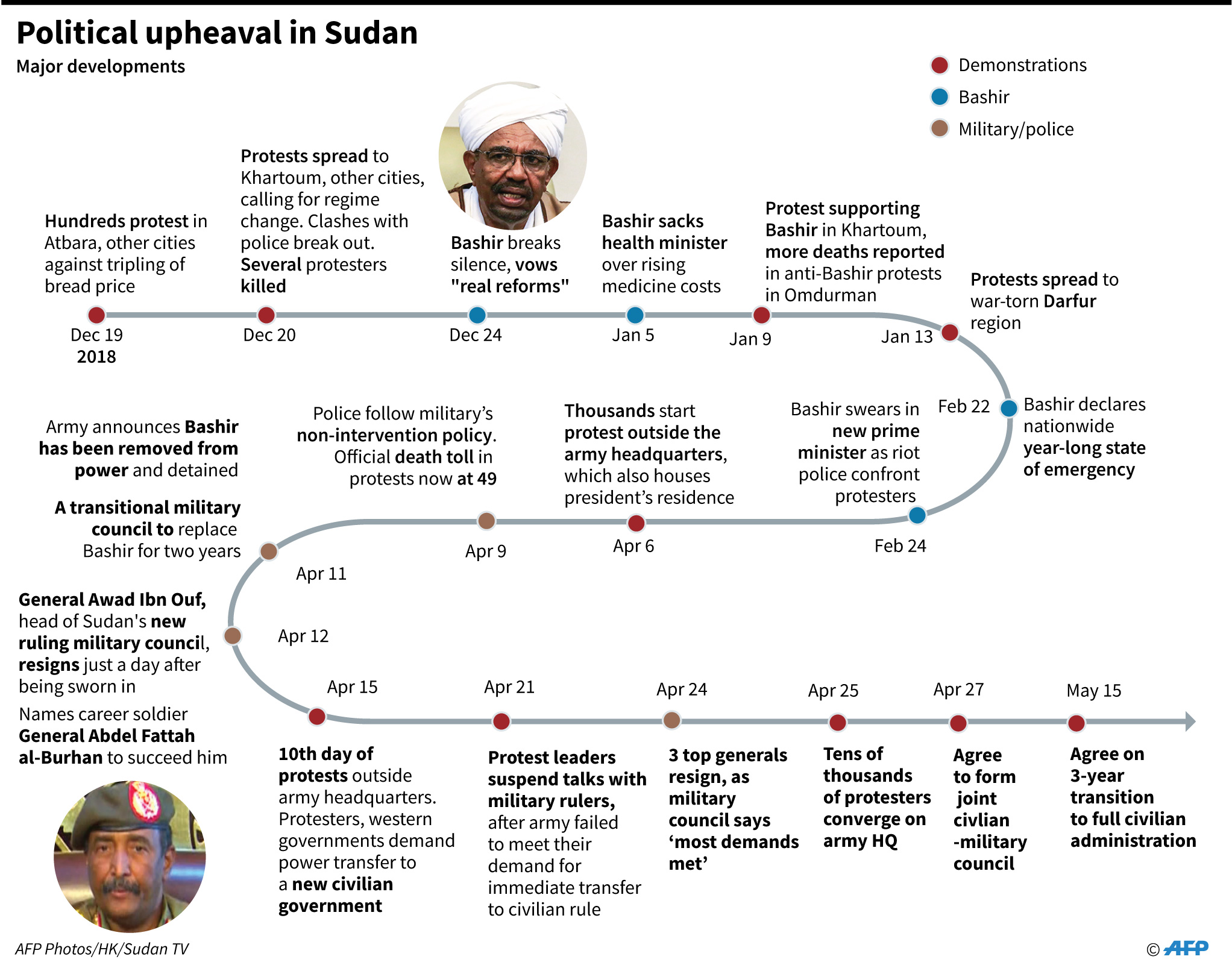 Some political groups want to leave out rebel groups while the Sudanese Professional Association wants them included. In addition, some political parties feel protestors’ demands are unrealistic, while demonstrators believe their demands do not go far enough. This difference could threaten the protestors’ overall goal.

A second obstacle is the fragmented security apparatus, which was tightly controlled by Bashir.

The security sector is divided between low, middle, and senior ranks. When the National Intelligence and Security Service and Rapid Support Forces counter-insurgency units started attacking protestors at the start of the demonstrations, it was the military who protected protestors.

Coupled with this is the difference in demands between protestors and senior generals. Lt. Gen. Abdel Fattah Abdelrahman Burhan, who seized power from Bashir and is now head of the transitional government, has so far ceded to various demands, including promises to dismantle National Intelligence and Security Service.

The final obstacle is dealing with the issue of South Sudan and the rebel groups operating in Darfur, South Kordofan, and the Blue Nile. These groups have been fighting Bashir and the state for decades. There is mutual mistrust between members of the transitional military council, Sudan’s government, and the rebel movements.

Previous peace processes consisted of weak mediation processes, an inconsistent strategy for participation, and fragmentation between the rebel movements and the political parties.

An additional, larger question is whether political parties and protestors can negotiate power with a group that includes individuals accused of war crimes.

What Does Future Hold for Sudan?

The regime won’t simply hand over power because of the protestors. Even with a united opposition, this would be difficult; hence Sudanese should expect a long journey ahead with many twists, plots, and sporadic efforts to concede to protestors demands.

Recent disputes over how to deal with the military and the composition of the civilian administration highlight the dilemma that Sudan faces. It is not remotely clear whether the transitional military council agrees on how to continue; neither is it clear who is in charge.

Mutiny within the military and another power play among the security chiefs cannot and should not be ruled out. At this stage, the transitional military council is attempting to consolidate power, but it is uncertain whether lower and mid-range security personnel, especially amongst the military, will continue to support protestors.

Sudan now has a chance to embark on a path to reconciliation. This transition could go three main ways.

First, Sudan could adopt the Ethiopia model of President Abiy Ahmed, who made great strides at reforming the authoritarian country in his first year in office. In Sudan, a similar path would require a radical reformist that enjoys the backing of protestors, civil and professional society, armed groups, and the entire security sector. Unfortunately, today’s Sudan is nowhere near this model.

The second model is that of Egypt, which is a familiar setting across the Middle East and Northern Africa. After Egypt’s 2011 revolution, the nation ended up with Abdel Fattah al-Sisi, who will now hold power until 2034. Sisi’s electoral win gave him democratic legitimacy, but he then slowly ushered in a host of changes to the existing democratic framework.

The third option is the Libya model, where foreign governments back a regime to their liking but generals rise up to pose a threat like Khalifa Haftar did in Libya.

The Kenyan post-2008 elections model is the fourth option, but this would need sustained external support from the African Union’s Peace and Security Council. Kenya’s situation involved former U.N. Secretary-General Kofi Annan mediating between the opposing parties and supporting a transitional government. This could work well for all or end up fuelling or contributing to new conflicts.

Sudden changes could hamper Sudan’s future and leave protestors with a model resembling Egypt or Libya. If reforms are rushed through Sudan could end up with internal fighting between groups and civilian components which would then support the military’s overall position of gaining control through states of emergencies.

Slow reform that builds the right institution through a democratic and technocratic process is key. Adding to this will be the right leader. If the right leader is not put in place, the military and the formerly in power National Congress Party could try to intervene and take back control.

It is vital that the elites and military still very much have a say in Sudan’s business. A rush to elections will hamper Sudan’s ability to deal with the issues at hand and revert to the status quo.

Reforming the state should not be done by relying on the structures put in place by the previous government which was carried by elites and the security apparatus. Doing so will only leave the Sudanese state with the same deep state structural issues as before.

For Sudan to achieve a reformist model like Ethiopia, interference from the international community must be kept to a minimum. This will allow the Sudanese to find their own unique transition that sees the country develop into a more inclusive and prosperous society which could eventually lead to a full transition to democracy.