by Arman Mahmoudian
in Opinion

The Syrian civil war has had huge implications for the region and world at large. The refugee crisis, Russia’s return to the region, and rising proxy wars between regional actors are just some of the conflict’s outcomes. Another consequence of this bloody war is the expanding Kurdish role in the region.

Up to 35 million Kurds inhabit the Middle East. They live in a wide mountainous region across the borders of Iran, Turkey, Iraq, and Syria. Kurds are the fourth largest ethnic group in the Middle East, but before the civil war in Syria, the only major Kurdish actor in the region was the Kurdish Regional Government (KRG) in northern Iraq. Syria’s civil war, despite its horrendous consequences, turned into an opportunity for the Kurds.

The spread of chaos across Syria and emerge of dozens of armed rebellion militias left President Bashar al-Assad with two choices: witnessing the complete fall of his regime, or prioritizing areas of the country and keeping the most important ones. Obviously, Assad and his allies chose the second option and focused their resources on strategic places like Damascus, Aleppo, and the coastal province of Latakia.

The regime tried its best to avoid a confrontation in less strategic regions and even withdrew part of its troops from these regions in early 2012, including the North East and North West mostly populated by Kurds. This tactical withdrawal of the regime was a strategic victory for the Kurds in Syria.

Eventually, in 2012, Syrian Kurds successfully took over most of the Kurdish-populated areas in Syria. This new evolution faced different reactions from local, regional, and international actors. The U.S. found it a pleasant development, but Turkey immediately felt threatened. Russia found an ally in the Syrian Kurds and established official ties, while Iran found them the enemy of their enemies Turkey and the Syrian Sunnis rebels.

Right after the Kurdish takeover, the U.S. recognized them as a valuable asset in the fight against Islamic terrorism. Later, in 2015, the formation of the Syrian Democratic Forces (SDF) was announced. This new military force, which had notable size, received a great deal of aid from the U.S. and European Union and is militarily led by a Kurdish militia, the People’s Protection Units (YPG).

The SDF played a significant role in the fights against ISIS and turned into the U.S.’ most reliable ally on the ground. A collation of U.S. Air Force and SDF militants on the ground successfully defeated ISIS’ caliphate, but in the meantime, privileged Kurds with wide territorial extensions. For the first time in Syria’s modern history, Kurds controlled not only their traditional region but also Arab populated areas over the northeast bank of the Euphrates River. 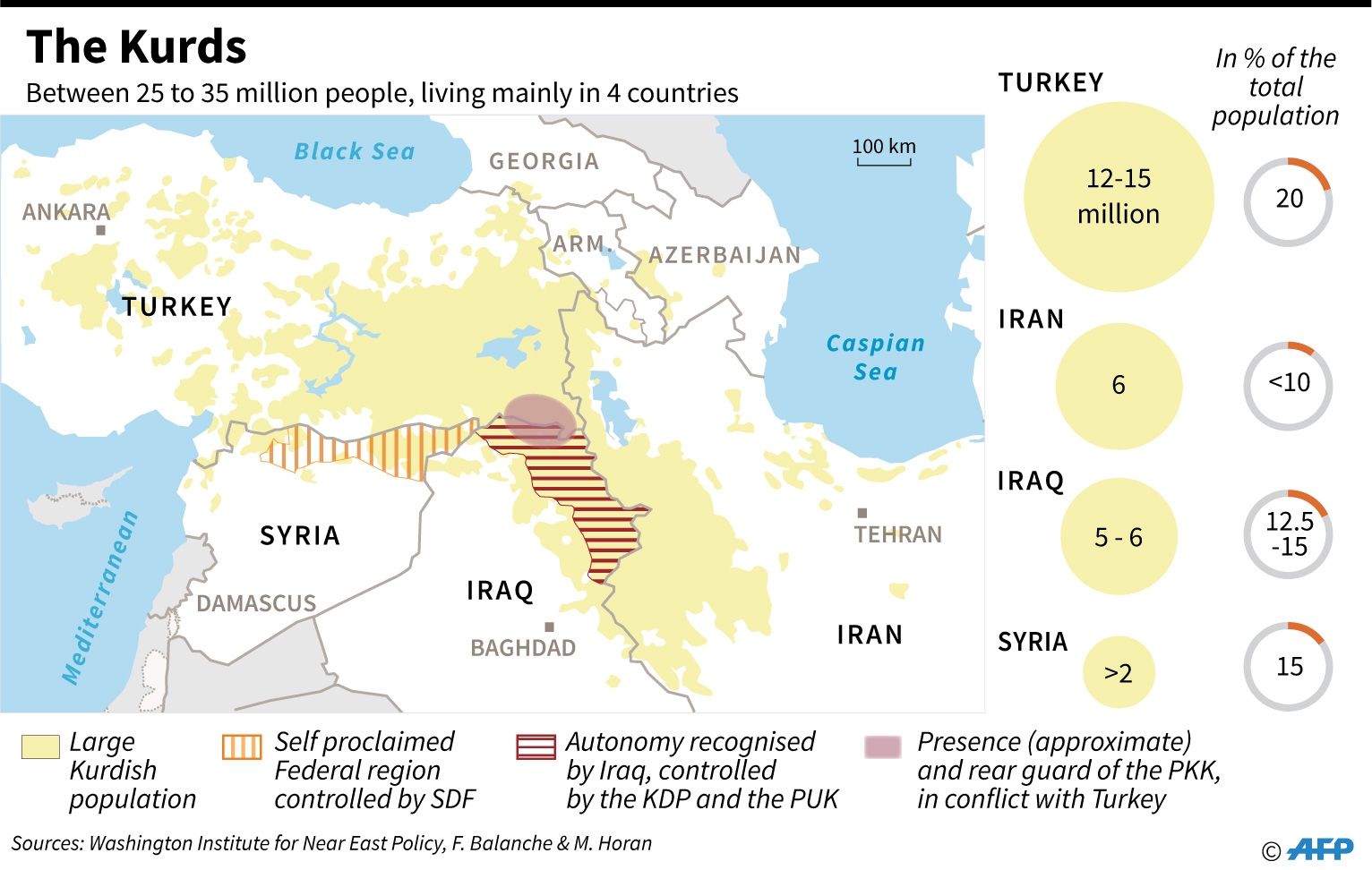 The empowerment of Syrian Kurds was not that much of a pleasant change for Turkey and Syrian Arab rebels. Turkey saw them and their cooperation with the Kurdistan Workers’ Party (PKK) as a threat to its territorial integrity, while Arab rebels did not welcome them for numerous reasons such as pressure from Turkey, historical skepticism between Arab and Kurds, and, most importantly, competition over different territories.

Turkey’s Offensive and US Troops Withdrawal

The awkward silence between Turkey-Arab rebels and Kurds did not take long. On January 20, 2018, Turkey, in collation with Syrian Arab rebels, launched a massive ongoing military campaign against Kurdish forces. Since then, Turkey captured 282 town and villages in northwestern Syria previously held by Kurds. The Kurds’ situation worsened when the U.S. announced its plan to withdraw up to 1,800 out of 2,000 troops from Syria, a decision which made Kurds feel betrayed by the U.S. and left alone against hundred thousands of Arab rebels and Tukey’s powerful army.

The struggle with the Turkey-Arab rebel collation and the U.S.’ decision to withdraw troops left Kurds with no option but moving closer to the other side of the coin: the Syrian regime and its allies.

On December 28, 2018, while Turkey-backed forces were advancing toward the city of the Manbij in northern Syria, the YPG leadership issued a statement welcoming Syria’s army into Manbij. In other words, to stop NATO-member Turkey, U.S. ally YPG literary handed Manbij to the Syrian regime, the U.S. official enemy in the region.

Pressure from Turkey and Arab rebels and losing U.S. support are not the Kurds’ only challenges ahead. They are also facing domestic challenges from the local Arab inhabitants.

Suddenly, Kurds find themselves in confrontation with Turkey, which is Iran’s regional rival and Assad’s enemy, and Arab Sunni rebels who are a threat to Assad’s regime, Russia, and Iran. In addition, Kurds are disappointed in the U.S., the greatest threat to Iran and Syria, and Russia’s superior competitor.

The Kurds do not only share the same threats with the Syrian regime and its allies. The achievements that both sides gained have cost them massive amounts of resources and casualties. Obviously, neither Assad’s side nor the Kurds have a more practical option than tolerating each another to confront the bigger threat which they feel from thousands of well-trained armed rebels in the Idlib province in northwestern Syria.

At last, increasing collaboration between the Kurds and the Syrian regime and its allies is a highly possible scenario, although it does not mean that Kurds will accept Damascus leadership as they used to. The cooperation would be mostly limited to confronting some rebels and pushing Turkey out of Syria.

Researcher at Centre for Strategic & Diplomatic Studies, Ph.D. Student in International Relation at the University of South Florida