by Sophia Dingli
in Opinion

As a result of the violence, disease, and food insecurity, a Yemeni child dies every 11 minutes and 54 seconds. Photo: Mohammed Huwais/AFP

The scale of the devastation which has befallen Yemen is hard to fathom. Since March 2015, over 70,000 people have died in combat. The total deaths are estimated to reach 233,000 by the end of this year.

About 15.9 million of Yemen’s 29 million population is facing food insecurity, of which 5 million are at a “crisis” point and 63,500 are facing famine. Between January and April 2019, 150,000 new cholera cases were reported in the country.

As a result of the violence, disease, and food insecurity, a Yemeni child dies every 11 minutes and 54 seconds.

These numbers are staggering, but they have failed to captivate the attention of international audiences. A reason for this is that while numbers may capture the scale of the disaster, they also dehumanize its victims. Herein lies the crucial catch-22 for anyone reporting or commenting on the Yemeni war.

Numbers hardly register because we forget the humans behind the numbers. This is especially true for the Middle East, which generations of Western audiences only know as a dark space which produces terrorism, war, violence, and oppression. When violence materializes in this part of the world, it surprises no one. 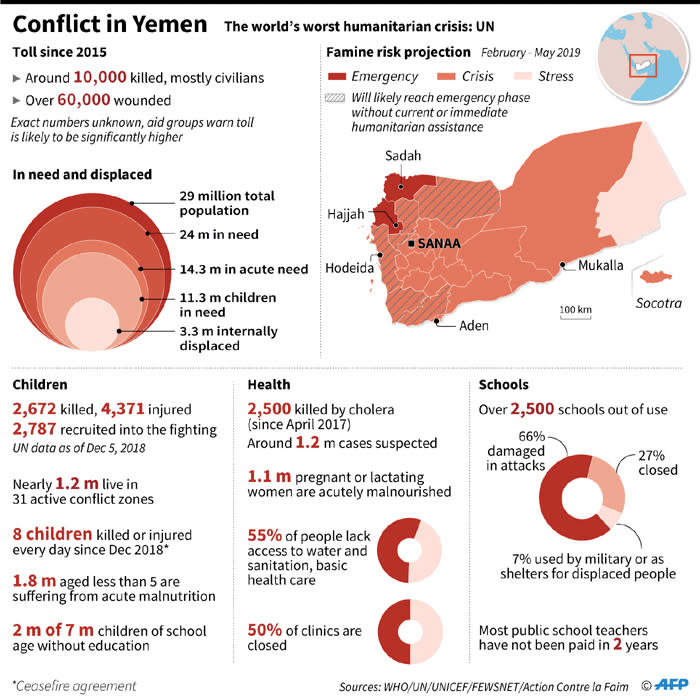 Western audiences assume that no life, joy, creativity or culture – in short, nothing good – has ever come or will ever come from this space. This might explain people’s surprise and often outrage at the mere fact that life goes on in Yemen, that people keep getting married, keep celebrating, and keep having children.

Journalists reporting from the frontlines in Yemen provide us with a way of re-humanizing the Yemeni war. They do so by introducing Yahia al-Hassbi, a 14-year-old boy who was struck dead by a U.S. drone while tending his goats. Through journalists’ work we met Farouk Baakar, a young medic tortured for 18 months because he took a selfie with a man he was treating, and who now lives in a tent taking care of refugees. Recently, we also became familiar with Maad al-Zekri, a Pulitzer Prize-winning journalist who has been instrumental in reporting on different facets of the war and who was prevented from entering the United States to receive his award.

It is also worth revisiting the Happy Yemen video produced 10 months before the war started, which features Yemenis of all ages singing and dancing to Pharrell Williams’ song Happy.

This, as well as other works by Yemeni artists, effectively affirms Yemenis’ humanity, prompting us to consider the actual scale of the catastrophe more effectively than numbers alone ever could.

The fate that has befallen millions of brutalized Yemenis is entirely man-made. It is not only that the war is an entirely unnatural disaster, but that even when humanitarian aid enters the country, it often does not reach the needy. Both cholera vaccines and food aid have been diverted away from disloyal areas, used to punish or blackmail populations and/or have been stolen and sold at the black market.

To add to the picture, all parties to the Yemeni war have been recruiting and using child soldiers as young as 10. Furthermore, reports suggest that torture, including rape, is widespread across the country’s prisons.

The main parties to the war, the internationally recognized government of Abd Rabu Mansur Hadi and the Houthis, have been accused of war crimes and in some cases of crimes against humanity, as have their international backers. For example, the Saudi government, which supports President Hadi, has been accused of indiscriminate and disproportionate bombing campaigns. Their ally, the United Arab Emirates, is accused of widespread torture. The U.K. and U.S. governments are accused of having knowledge of both and turning a blind eye or even actively collaborating in these acts.

Confusingly, these same governments contribute to the humanitarian effort, perhaps to legitimize their involvement in the war to international and domestic audiences.

The complexity of the Yemeni war means that humanitarian agencies are finding it particularly hard to be effective in the hell-scape. The situation has gotten so bad that the World Food Programme is threatening to stop operations in the Houthi-run northern part of the country.

Similarly, human rights organizations and journalists have been reporting on widespread torture and the use of child soldiers, almost to no avail but a few empty promises of further review.

In the meantime, those with power on the ground continue to rule through widespread coercion either by design, omission or through sheer lack of control over their forces. They refuse to enter meaningful peace negotiations. Events so far indicate that if the balance of power remains as it is, with no outright winner and international allies upholding the scale, the war and all that it entails will go on.

Young medic Farouk, journalist Maad, and millions of their compatriots will continue enduring hardship. Some will survive, some will not. Numbers alone cannot fully grasp the tragedy – remembering their humanity might.

UN Warns of Alarming Rise of Hunger in War-Torn Yemen

As Sea Level Rise Accelerates, US Coastal Communities Brace for the Inevitable