Qatar’s Blockade Enters Third Year: Who Are the Winners and Losers?

by Nader Habibi
in Opinion

Qatar has continued to prosper despite Arab nations cutting ties with it over accusations of supporting extremism. Photo: AFP

The Qatar crisis entered its third year this month, and there is no indication that it will be resolved anytime soon. When Saudi Arabia and the United Arab Emirates launched the economic blockade of Qatar two years ago, they were expecting it to be effective within a short time.

Since over 60 percent of Qatar’s trade was transited through the UAE ports and Saudi border crossing, the blockading countries expected the isolation to cause a painful disruption to the Qatari economy. This severe trade shock, in combination with the anticipated support of President Donald J. Trump, surely would force Qatar to accept the Saudi demand for altering its “unacceptable” foreign policy.

Much to Saudi Arabia and the UAE’s surprise, neither of these predictions materialized. As soon as the blockade was announced, Iran and Turkey rushed to Qatar’s assistance by offering to establish new trade links and delivering a variety of consumer goods by ships and planes. Iran opened its airspace to commercial planes for flights to Qatar that were no longer allowed to enter the airspaces of UAE, Saudi Arabia, Bahrain, and Egypt.

In his first reaction, President Trump expressed support for the blockade in a tweet. Soon after, however, it became clear that the U.S. official reaction, as delivered by the state department, was neutral.

During my recent trip to the Middle East I stated that there can no longer be funding of Radical Ideology. Leaders pointed to Qatar – look!

Secretary of State Rex Tillerson tried to resolve the issue through intermediation without supporting the Saudi position. As a result, Qatar remained defiant, and it was further emboldened by Turkish military support. Before the blockade, Turkey maintained a small number of troops in Qatar as a symbolic gesture of military cooperation. At Qatar’s request, Turkey raised its number of troops to 3,000 soon after the blockade.

In addition to these external factors, the small national population of Qatar and its large sovereign wealth also contributed to the country’s ability to remain defiant and resist the blockade.

The Qatari government used its massive financial reserves to pay for the higher transport costs of imports and to support the domestic industries that suffered huge losses as a result of the blockade. 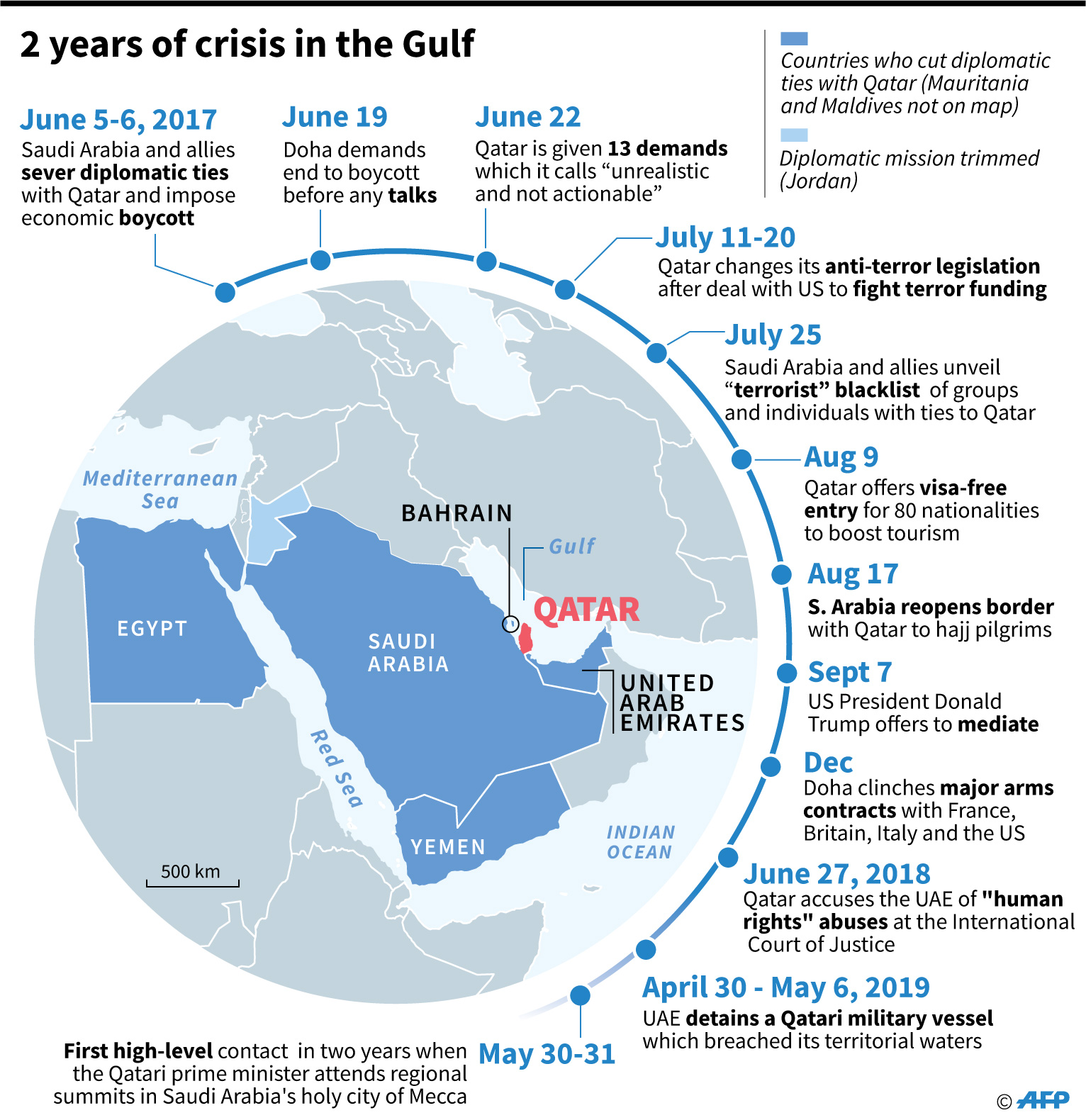 In response to the blockade, Qatar’s government intensified its efforts to attract foreign investment and prevent the businesses already in Qatar from leaving. The government prioritized financing for the massive construction projects that were underway in preparation for the 2022 World Cup, and many international firms that were managing their Qatar businesses from their regional offices in Dubai bypassed the blockade by establishing direct branches in Qatar.

Qatar’s economic statistics for 2017 and 2018 indicate that the negative impact of the blockade on investment and economic activity was moderate.

Furthermore, despite causing temporary shortages of many goods, the blockade did not lead to a significant price increase. The annual inflation rate in 2017 was below 1 percent.

At the same time, the Qatar blockade crisis has had important regional consequences. It has practically paralyzed the six-member Gulf Cooperation Council (GCC), which was already suffering from factionalism and internal divisions. Established in 1981 in response to the regional threats from Iran and Iraq, GCC countries took several steps towards security and economic cooperation. It was also successful as a regional block in several rounds of investment and trade negotiations with Europe, China, and India between 2000 and 2010.

Up until the Qatar crisis, the GCC members were able to manage the internal rivalries and disagreements to maintain a minimum posture of unity. These included incidents such as the 2005 Saudi-Bahrain dispute over the latter’s free trade agreement with the U.S. and the 2010 Saudi-UAE dispute over the location of a GCC central bank (which never materialized). The Qatar crisis has caused a deeper division that might be much more difficult to repair.

Some members are forming new alliances, which can undermine GCC. In late December 2017, Saudi Arabia and the UAE announced the formation of a new bilateral military and economic alliance, which is partly the result of their close cooperation in the Yemen war and other regional issues.

On the opposite side of the dispute, Qatar has significantly strengthened its economic ties with Iran and Turkey. Turkish construction firms have won many contracts for World Cup projects, which otherwise would have been awarded to the UAE-based construction firms such as Emaar. Many Iranian businesses that have come under pressure in Dubai because of the Iran-UAE tensions have moved their operations to Doha.

The United States offers military protection to each GCC country, not only against external powers (such as Iran, Iraq, or Egypt) but also against each other. Consequently, a small nation like Qatar can rely on U.S. protection to pursue an independent foreign policy without paying attention to its much larger GCC neighbors (Saudi Arabia and the UAE). As long as the U.S. does not put pressure Qatar to compromise, Saudi Arabia and the UAE cannot force Qatar to concede, and the crisis is likely to continue.

At the same time, the heavy U.S. military presence in the region prevents either side from escalating the crisis into a military confrontation.

Since multiple attempts by various intermediaries have failed to end the Qatar crisis, the international community is beginning to view it as a new normal for dealing with GCC countries.

There has been little change in Qatar’s hyperactive foreign policy, and it is actively competing with Saudi Arabia and UAE for influence in the Arab world and beyond. In the latest episode of this competition, both sides are trying to improve their relations with Iraq. Much to the displeasure of Saudi Arabia, which is courting the Shia political groups that are opposed to Iran’s influence in Iraq, Qatar has shown a willingness to court the Shia factions that are close to Iran.

Henry J. Leir Professor of Practice in the Economics of the Middle East at Brandeis University’s Crown Center for Middle East Studies

US Citizen Jailed in Saudi for Tweets on Khashoggi, Yemen: Son

Tuberculosis Kills Thousands Every Day, So Why Don't We Talk About It?