by Sonja Wolf
in Opinion

Individuals, and sometimes entire families, are fleeing desperate poverty, the effects of climate change, violence, political instability, and corruption in Guatemala, Honduras, and El Salvador in Central America. Some of the people from the region known as the Northern Triangle hope to find work or refuge in Mexico, which is struggling to process the soaring number of asylum claims. Given Mexico’s chronically low wages and pervasive insecurity, most Central Americans try to cross clandestinely into the United States or apply for asylum.

However, as the Donald J. Trump administration has ramped up its efforts to block their entry, people are increasingly trapped in Mexican border cities such as Tijuana and Ciudad Juárez. In the continued absence of Trump’s much-vaunted border wall, his government requires asylum-seekers to wait out their process in Mexico, has attempted to sign a safe-third-country agreement with Guatemala, and announced the deployment of Department of Homeland Security agents to the Mexico-Guatemala border.

….stem the tide of Migration through Mexico, and to our Southern Border. This is being done to greatly reduce, or eliminate, Illegal Immigration coming from Mexico and into the United States. Details of the agreement will be released shortly by the State Department. Thank you!

Mexico itself has been playing a strategic role in the United States’ deterrence-based migration policy. The administration of President Andres Manuel Lopez Obrador had initially signaled its commitment to human rights-based migration governance. The president has praised Mexican migrants for their contribution to the national economy and vowed to defend them. But his government’s approach to Central American migrants quickly became ambiguous and contentious.

Reflecting conflicting provisions on human rights and national security in Mexico’s Migration Law, the Lopez Obrador administration echoes its predecessor’s stance toward the transit of Central Americans. While it expresses rhetorical backing for human rights and development, in practice, it focuses on detaining and deporting unauthorized border crossers. With the continuous expansion of its migration infrastructure, supported by the U.S.-financed Mérida Initiative, Mexico has at times apprehended and expelled more migrants than its northern neighbor.

Under President Lopez Obrador, migration agents and police continue to aggressively pursue Central Americans, on occasion with fatal consequences. Worse yet, the recently created militarized National Guard has harassed migrant rights defenders and is projected to contribute to abuses against migrants.

But Mexico’s government has also announced a development and investment strategy aimed at curbing migration from Central America, chiefly through job creation.

At the heart of this plan lies an assessment titled Development and Migration: Challenges and Opportunities in the Countries of Northern Central America, prepared and presented earlier this year by the Economic Commission for Latin America and the Caribbean. The publication offers an analysis of migration dynamics within and from northern Central America and proposes development strategies that are meant to ensure a “safe, orderly, and regular” migration.

The authors find that the Northern Triangle experiences limited economic growth, widespread poverty and inequality, and a migration that is strongly rural. Transit and destination countries have criminalized undocumented migration and pursued a policy of mass deportation.

In light of these realities, the authors argue for job creation, support for agriculture and rural development, and investment in regional tourism. They also suggest temporary work permits to foster legal migration. 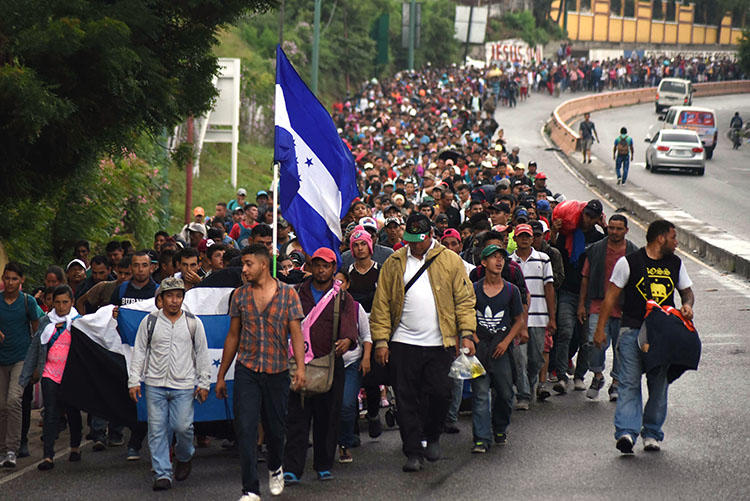 On a positive note, the document seeks to change existing narratives on migration. It rejects the idea that migrants are a problem, positing instead that migration and economic policies, as well as geopolitics, have shaped human mobility in North and Central America. Those countries, therefore, have a shared responsibility to address the movement of people.

While the text offers recommendations, it entails no policy, program, or budget commitments. The Lopez Obrador administration has declared that it intends to finance a tree-planting project in El Salvador and to create 20,000 jobs in Honduras and 40,000 maquila (assembly plant) jobs in northern Mexico. It is unclear, however, to what extent these promises are taking shape or will slow the current exodus.

There are certainly reasons to be skeptical about the migration impact of this latest development initiative. Job creation by itself is unlikely to change the minds of those who feel compelled to leave their country. Research suggests that a narrow focus on livelihoods development may increase, rather than decrease, migration by giving individuals more resources. Investment in economic and governance structures, however, can promote growth and stability in the long term and create genuine alternatives to migration.

Honduran migrants I have been interviewing in Mexico stress the need for higher wages and access to affordable education and healthcare. The government of President Juan Orlando Hernandez is currently seeking to privatize these public sectors and is violently repressing protests against the reforms. Agricultural work, grueling and underpaid, leaves people already struggling to subsist amid rising costs of living.

Climate change is exacerbating existing socioeconomic vulnerabilities in Central America. In the absence of greater recognition of and investment in climate change mitigation strategies, even more people will be exposed to droughts, intense rains, and food insecurity. With similarly low salaries and rampant insecurity in Mexico, most migrants hope to move further north and earn dollars.

Poverty and Violence in Central America

The Northern Triangle will not turn the page on poverty and violence if political leaders remain uncommitted to decisively tackling corruption and impunity.

Guatemala’s President Jimmy Morales has prematurely terminated the mandate of the International Commission Against Corruption and Impunity in Guatemala (CICIG) after he came under investigation for illicit campaign financing. Co-sponsored by the U.N. and the United States, this body has played a pivotal role in strengthening the rule of law in that country. Alejandro Giammattei, the winner of the run-off presidential elections of August 11, is tainted by corruption allegations and opposed to the continuation of the CICIG’s mandate.

Talk of development aimed at disincentivizing migration is not new. In 2014, following a spike in child migrant arrivals at the U.S.-Mexico border, Mexico launched the Southern Border Program to offer security and development for Central American migrants. That same year, the Northern Triangle countries and the United States adopted the Plan for the Alliance for Prosperity to promote commerce and employment, improve security, and strengthen institutions as a way of curbing irregular migration.

The results are unclear. Neither statements of good intentions nor restrictive migration policies will curtail regional mobility driven by a frantic search for dignified, sustainable, and safe livelihoods.

The 2020 U.S. presidential election campaign is an opportunity to reframe the debate on migration and refugees and to discuss how the United States, Mexico, and Central America can better serve these vulnerable populations.

Holds a Ph.D. in International Politics and is a CONACYT Research Fellow with the Drug Policy Program at the Center for Economic Research and Teaching (CIDE), Mexico. She is the author of Mano Dura: The Politics of Gang Control in El Salvador (University of Texas Press, 2017). Contact her @scwolf5