Inside Lampedusa, the Front Line of Europe’s Migration Crisis

While the total number of arrivals to the EU has dropped, the rate of deaths across the Mediterranean has sharply increased. Photo: Aris Messins, AFP

Known as an epicenter of the migrant tragedy in the Mediterranean Sea, the island of Lampedusa is a popular Italian tourist destination. The island is the southernmost part of Italy, closer to Tunisia – 70 miles away – than Italy – Sicily is 127 miles north.

Beginning around 2011 amid the Arab Springs, thousands of migrants started their trips from Northern African countries in the Mediterranean Sea, finding in Lampedusa the gate to Europe.

According to the Italian Interior Ministry, in 2011, 62,692 people arrived in Italy – 51,753 of whom arrived in the Pelagie islands of Lampedusa, Linosa and Lampione. The migrants come predominantly from countries in North Africa, Sub-Saharan Africa, and the Middle East.

With the rise of far-right, anti-immigrant Interior Minister Matteo Salvini and his “closed ports” policies, the number of migrants admitted into Italy dropped dramatically from more than 181,000 in 2016 to just 23,371 in the last year.

Salvini’s policies culminated in a high-profile humanitarian and political crisis in 2019, with Italian officials refusing to allow migrant rescue ships to dock in Lampedusa, stranding migrants at sea for weeks with little food, water, or medical supplies.

As the number of migrant arrivals to Italy have fallen, so to have the reported numbers of migrants deaths at sea, with the Italian coast guard suspending search and rescue efforts.

But because of a recent shakeup in the Italian government, Salvini is now out of power, making the future of the migrant situation in Lampedusa unclear. To help shed light on the situation, The Globe Post spoke to Alberto Mallardo of Mediterranean Hope, a project of the Federation of protestant Churches in Italy created in 2014 to analyze migration flows in the region and assist migrants and asylum seekers who arrive on Lampedusa.

Mediterranean Hope also includes the Observatory on Mediterranean migration, based in Lampedusa and coordinated on the field by Mallardo.

The interview has been lightly edited for length and clarity.

TGP: According to the coverage on Lampedusa, the so-called ‘“autonomous,” unofficial migrant disembarkments continue to happen. How’s the situation on the island?

Mallardo: In recent weeks, hundreds of people have continued to arrive, many of them from Tunisia with others from Libya. This year on the island of Lampedusa, 2,100 people have arrived, a number that is way less than in the past.

Last year about 3,500 people arrived in Lampedusa, while the year before there were about 9,500. Still, this is a much lower number than in previous years but it still testifies that the flows are happening.

People continued to arrive in Italy despite the former Interior Minister Matteo Salvini and the so-called “closed ports policy.” And the paradox that has been documented in recent months was an obvious disparity of behavior because the migrants who were rescued by ships of non-governmental organizations were forced to wait for weeks to know their future on the high seas. 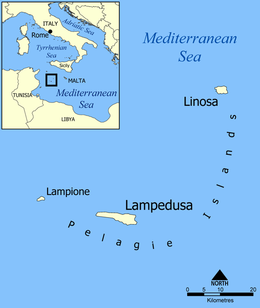 Last June, Sea Watch waited for 17 days before landing on the island of Lampedusa, while in August Open Arms waited for 19 days.

Meanwhile, boats continued to arrive autonomously. In some cases, the Coast Guard itself was providing relief. However, most of the time, the authorities limited themselves to monitoring the incoming boats and not carrying out rescue operations.

Italian territorial waters extend 13 miles around the island of Lampedusa, so it is a very limited sea area. The rest that surrounds the island is under the Maltese search and rescue responsibility, which does not have the operational assets to cover the vastness of the area.

Although the numbers of arrivals decreased, those of the dead have proportionally increased. According to the IOM, the World International Organization for Migration, about 1,000 people would have died in the central Mediterranean in 2019. Considering that around 2,000 people arrived in Lampedusa, we are talking about a third.

TGP: Are there any other ways to arrive in Europe?

Mallardo: The journey in the Mediterranean Sea has become more and more difficult. The Mediterranean is today a desert where there are no ships that rescue people. And in the meantime, no alternative solutions have been found.

For years we have been promoting alternative entry channels – the so-called “Humanitarian Corridors” – aimed at offering humanitarian protection to migrants in need, allowing them to obtain an entry visa to Italy and Europe so that they can travel in safety.

Last spring we renewed our commitment directly to the then-in-office Italian Government, calling for the opening of a humanitarian corridor from Libya for 50,000 people. We have to remember that in Libya, there are people recognized by the UNHCR with the rights of asking for asylum status.

We made this request to the government, which responded by showing an interest. But that was only on paper. Now we hope that perhaps in the coming months we can think of implementing measures that, on the one hand, would confront organized crime that controls migration flows, but on the other hand, would also protect the people who are in Libya today.

Libya is a country at war where the refugees themselves, when they are not exploited by militias and jailers, often find themselves trapped in the armed conflict. Europe has not assumed any responsibility for what it is happening in Libya and has indeed taken its eyes elsewhere while continuing to finance the militias, the Fayez Mustafa al-Sarraj’ government, that of Tripoli and that of Khalifa Haftar.

Europe is playing an important role strategically from an economic point of view without caring too much about the people who pass by Libya and who, in some cases, die.

TGP: Last week, news has circulated about false certificates made by doctors to let migrants disembark faster. What do you know about it?

Mallardo: The controversy arose during the Open Arms case. First of all, NGOs do not have much to do with health analyses because they are not those who conduct them. From time to time doctors can go on board. They are usually from the Sovereign Military Order of Malta, the organization that serves on board the Italian Coast Guard and the Finance Police, that has an agreement with the Italian government to provide health services on board the Italian State aid ships.

On the occasion of the Open Arms case, the medical director of the Lampedusa health center, even though he was not on the island, declared to the newspapers that inaccurate clinical diagnoses had been made and that the medical health situation of the migrants had been exaggerated to disembark them.

A rescue boat carrying 100 people has been stranded for 19 days off Italy.

Only some migrants — mostly children and sick people — have been allowed off.

Rescuers say most on board are sleeping on the deck and sharing 2 toilets.

It says some of them are suicidal. pic.twitter.com/d3FmDqvose

As far as I know, the case took second place in the media and I am not sure if the doctor even changed his statement, but I don’t know the details. We are still talking about medical opinions and I imagine that in a certain sense what it is important is the responsibility of the doctor who makes the diagnosis.

In my opinion, another paradox is that we often hear that the vulnerable, such as women and children, are the first to be disembarked, suggesting that other people on board are not considered to be so when they are.

The Globe Post: Regarding the new Italian government, do you think the situation will change? If so, how?

Mallardo: It is too early to understand how things will change. In a certain sense, we hope that Italy, even if it may have a weak voice at the European level, can somehow reiterate its needs by asking for better solidarity from the other Member States.

For example, in June, Salvini did not attend the meeting that had been organized by several European countries to rethink the Dublin agreements – (The Northern League has never taken part in any of the 22 negotiating meetings over the course of two years to discuss the Dublin reform).

I wish for better collaboration between Italian and European authorities to seek shared solutions that can facilitate the task of the Mediterranean countries.

We are now talking about Italy, but Greece is also facing many arrivals. And Spain, if I am not mistaken, has welcomed about 30,000 people this year. So obviously it’s not just about Italy.

These numbers are absolutely manageable. We are not talking about an invasion but a small amount of arrivals that if managed on a European scale, I don’t think they can bring huge problems. Then obviously the hospitality and integration are complex, they require skills, preparation and resources.

But I’d say that the richest countries on the planet can handle this situation. In past years, this has not been the case. Indeed there has been a fear, a lack of will.

I hope that in the upcoming months we can find shared solutions regarding [the role of] Europe. As far as Italy is concerned, what we hope is that the Italian Coast Guard and the European Maritime forces in the Mediterranean will help start rescuing people at sea again.

As I said, in recent months the rescue operations of these naval forces has been very limited precisely because of specific directives arriving from Rome. And we believe that if emergency situations would arise, these boats can and should intervene. Because we cannot expect that private organizations play a role that should instead be played primarily by the state.

Pope Francis: Migrants Are a Symbol of Those Rejected by Globalization