by Alex Graf
in Featured, Interviews

Philippine coast guard personnel inspect a fishing boat, of which crew were allegedly killed by pirates off the coast of Laud Siromon in Zamboanga, the southern Philippine island of Mindanao. Photo: AFP

Piracy is an issue that affects several countries around the globe including Indonesia, Somalia, and Nigeria. Because many of the skills needed to work in the fishing industry are easily translatable to piracy, it’s not uncommon for fishermen to turn to piracy as an alternative source of income.

According to research by Sebastian Axbard, a lecturer of economics at the Queen Mary University of London, there is a correlation between poor local fishing conditions and increases in the rate of pirate attacks in Indonesia. Fishing conditions are influenced by oceanographic conditions like water temperature and levels of phytoplankton – a key source of food for fish.

While it’s difficult to draw a direct link between climate change and piracy, Axbard says that the findings of his research could have important implications for the future, as climate change is projected to cause an increasing deterioration of fishing conditions going forward. The Globe Post had the opportunity to interview Axbard about his research, and the following is a transcript which has been lightly edited for length and clarity.

Axbard: Sure. So we should be a little bit careful here about to what extent this is related to climate change. More specifically, what I’m looking at is environmental shocks in a specific type of oceanographic conditions in the water that determine the amount of fish in a local area at a certain point in time.

To do this I exploit an insight from the biological literature, which has shown that the temperature of the water, as well as chlorophyll-a concentration in the water,  are important determinants for the amount of fish. There are complex environmental processes that determine these conditions at a certain point in time. What I’m able to do in this study is that I rely on the marine biological literature and use satellite data to measure these conditions in the water at a high frequency. I looked at changes in these conditions and see how they affect the income opportunities for fishermen and the number of pirate attacks. 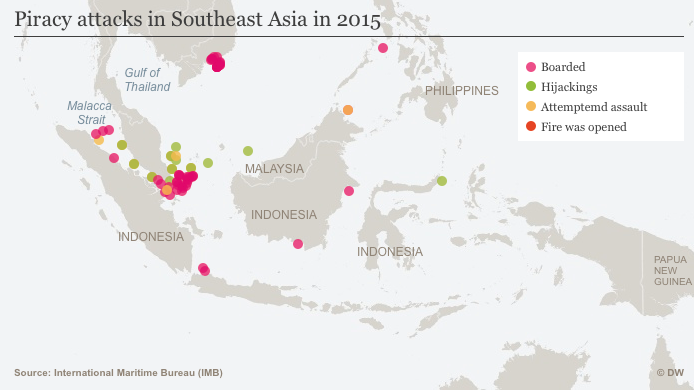 TGP: What did you find out about changing conditions in the water? How did it affect the rate of pirate attacks?

Axbard: When you have good oceanographic conditions, you have more fish and higher incomes for the fishermen. As a consequence, you also have a lower number of piracy attacks. This finding relates to a broader literature that has studied different types of short term environmental shocks and how they affect the probability of conflict, violent behavior, and crime.

What I can show is that it really seems to be this income channel that’s important in this setting. Because of environmental shocks, fishermen in my study are not able to reap the benefits from fishing, so they turn to this other potential income source which is engaging in piracy attacks. Understanding the drivers of these effects is important because it helps us think about what type of policy interventions that might be successful to reduce piracy.

TGP: So when you say environmental shocks, could you explain what you mean by that?

Axbard: So if you look at the conflict and crime literature broadly, there has been a number of different conditions that have been looked at like the overall daily temperature or the amount of rainfall. But in my specific setting, it’s looking at these oceanographic conditions in the water. So both the sea surface temperature and the chlorophyll-a concentration, which is essentially determining the amount of phytoplankton in the water. That, in turn, determines the amount of food available for fish.

Axbard: So we know that there are natural variations in environmental conditions that can be causing these shocks to fishing conditions. A the same time, prior research has shown that there is a link between climate change and more volatile environmental conditions. So, in that sense this work speaks toward the potential implications of climate change on piracy. The reason that we have to be careful is that climate change is a more long-term process and with newer methods of adaptation and so on to these shocks, responses might look different. So it’s hard to project into the future what is going to happen as a consequence of climate change.

TGP: How common is it for fishermen to turn to piracy? What about pirates turning back to fishing? Is that something that happens as well?

Axbard: We don’t have any reliable information about the number of fishermen that engage in piracy, but from the aggregate number of attacks and the size of the fishing population, we know that it is likely a relatively small share of fishermen. The involvement of fishermen is also something that might vary quite a lot between different contexts.

Sometimes it could be that fishermen are recruited, for example, by criminal gangs that engage in piracy because of the particular skills that they have. They know how to navigate the waters and so on. Sometimes it can be the fishermen engaging in it themselves. But that really depends on what type of piracy activity that there is.

In the Indonesian waters during this time period, a lot of the attacks can be viewed as robbery at sea – entering international cargo vessels and stealing whatever valuables were on board and then getting out of there relatively quickly. So it’s very different from the hijacking that has been seen in some other areas.

TGP: How did the skills of fishing translate to piracy and vice versa? Are they pretty translatable?

Axbard: They’re translatable in a sense that knowledge of the waters is important and being able to navigate on the sea. These are key skills that are important both for the fishermen and for engaging in the piracy attacks. Of course, you might need additional weaponry and so on to engage in piracy.

Where and Why Do Modern Pirate Attacks Happen?

Keep up with his latest writing on climate, water, healthcare and more by following him on twitter @mjcabooseman

Crusade Against Vaping E-Cigarettes is Catastrophic for Public Health