Police walk over robes of academics at Ankara University.

A picture that rattled public on Friday eloquently reveals abysmal state of academic world in Turkey. Dozens of anti-riot police officers were trampling, walking over robes of academics on the ground at a campus of Ankara University after an intervention to break up a protest by students and professors.

On the day President Recep Tayyip Erdogan approved a constitutional reform bill, paving the way for a referendum on April 16, police’s brutal response to students and academics who protested purge of academics unleashed a sense of fury and despair among the public in an ominous sign of breakdown of social peace ahead of the historic vote.

Pictures of beaten professors, with female academics’ faces got purpled and bruised with punches and elbows from young anti-riot police officers sparked uproar and bitter dismay on social media. But it also revealed the desperate helplessness of people who are unable to stop the social carnage unleashed by unabated purge and crackdown since an abortive putsch last summer.

Hundreds of students and academics who were filled with rage with the latest mass firings of academics by emergency decree gathered in front of Ankara University on Friday to denounce the purge. They defied the government decision in a sign of civil disobedience by refusing to empty their office. 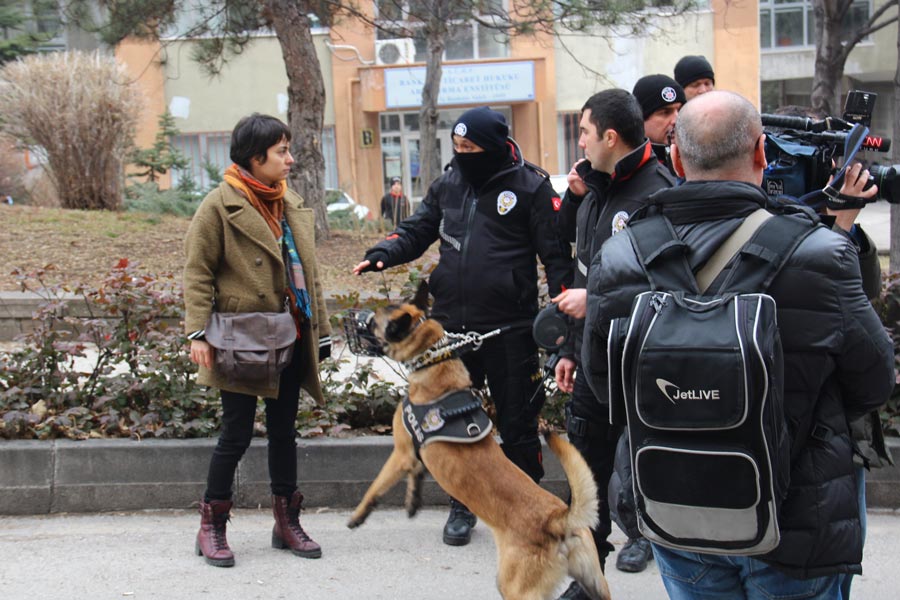 But their attempt was short-lived as the zealous police force, acting under orders from the government, displayed an unflinching boldness by breaking up the protest, dragging professors on the ground, detaining several of them. Neither lawmakers from main opposition Republican People’s Party (CHP) nor the respected titans of Turkey’s academic world who were present there were able to persuade police to treat protesters more kindly. Their requests yielded no result and only stiffened determination of young police members to quash peaceful gathering.

The social backlash unloaded by the recent purge of academics gave a pause even among government members as Deputy Prime Minister Numan Kurtulmus pledged to reconsider some of the sackings. After denunciations poured in from all corners of political spectrum, no institution wants to own the purge campaign in academia. Higher Education Council (YOK), which is responsible for regulating affairs regarding universities, shifted onus of preparing lists of academics to be purged on university rectors and boards, rejecting any responsibility for the firings.

To avoid enraged students and scholars’ resentment and bitterness, the universities say YOK has the final say over the lists. The scale of witch-hunt represents a low-mark water for academic freedom in Turkey, casting a darker picture worse than even military-led eras when free intellectual atmosphere was crippled by political pressure and intimidation. But official explanation does little to dispel concerns of embittered members of universities who face the constant threat of purge.

Professor Korkut Boratav‘s story encapsulates Turkey’s long history of repression of academic freedoms. His father Pertev Naili Boratav was dismissed from Ankara University in 1948 after an investigation over charges of spreading communism. Son Boratav was himself dismissed during military rule after 1980 coup. Boratav’s assistant joined them last week.

Victims of first purge in Turkish academia were mostly left-leaning intellectuals and professors as Turkey was in grip of anti-communist hysteria in the early days of the Cold War. It all started when three academics — Behice Boran, Pertev Naili Boratav, Niyazi Berkes — from Ankara University were dismissed in 1948 after an investigation launched by Education Ministry upon advise of a professor. Mediha Esenel Berkes herself resigned in 1947 while the investigation was still underway.

The left and right divide in Turkey’s political landscape unraveled into a full-blown political violence throughout 1970s, claiming 5,500 lives. The violent episode ended with a military coup in 1980, which heralded a new era of full-scale assault on academic world.

Before 1980, universities had had autonomy and managed themselves through senates formed by academics. Campuses were no-go area for law enforcement and security forces. With formation of a higher education council after the coup in 1983, the government curbed their autonomy and established ever-increasing control over universities. Every decade saw gradual erosion of academic rights and university autonomy against governments in Ankara.

On Tuesday, the government dismissed 4,464 more public servants, bringing to total number to nearly 140,000, in a sweeping purge campaign against opponents of all stripes, plunging the civil service and academia into disarray.

The government’s unrelenting clampdown has reached to epic proportions, even caused alarm within the government. Deputy Prime Minister Nurettin Canikli also vowed to bring the issue of purge at a cabinet meeting, said government will urge the YOK to review lists of dismissed academics.

“I want to express my sadness over mass firings with emergency decrees. This is not compatible with justice, it is against conscience,” Mr. Gul, the former president and founding member of the current Justice and Development Party (AKP), said at an event at his home city of Kayseri on Friday.

He recalled the days during Sept. 12, 1980 coup era when he faced investigation at a university while working as an academic. He left the country to study abroad, in Saudi Arabia, due to pressure from military-led government in Turkey. The former president urged his fellows at the current government to remember the days in late 1990s when Islamist government was forced by secular Turkish military to give up its hold on power. Conservative people, military officers, professors and public servants faced tremendous hardships, and even dismissals, though in small scale.

Israeli Policeman Jailed 9 Months Over Killing of Palestinian in 2014

The Jailing of a Hero: Halil Demir’s Tragic Story

For Turkish FM, There Is No Jailed Journalist in Turkey

As Climate ‘Net-Zero’ Plans Grow, So Do Concerns From Scientists