Is Russia Mediating Between Turkey and US?

by Abdullah Ayasun
in Featured, World

Syria is a cauldron of overlapping rivalries, conflicting strategies of outside powers and a web of proxy wars that pit neighbors against each other. And Syria emerges as a theater where Russia tests its chief geopolitical adversary, the U.S., with military muscle-flexing in a combustible battlespace that requires extra efforts to de-conflict their operations.

With Turkey’s military incursion last August, that battleground has become too overcrowded as one U.S. general depicts the scene that all forces acting in Syria “have converged literally within hand-grenade range of one another.”

The need to bolster coordination and resolve potential confrontations between sides has become an urgent imperative after Turkey-backed rebels’ advance towards Kurdish-held Manbij in northern Syria.

The Syrian conflict drives a wedge between two NATO allies as they diverge over how to deal with Syrian Kurds and how to execute long-delayed operation to liberate Raqqa from Islamic State. The U.S. has deployed artillery and armored vehicles to Manbij in an effort to keep lid on tensions between the Turkish forces and the Kurdish militia.

The need for de-conflicting of operations and interests brought top generals of three countries at a meeting in Antalya on Tuesday. It led Kremlin-controlled Russia Today to reach a conclusion that it has befallen on Russia to mediate the dispute between Turkey and the U.S. as NATO allies are locked in an ensuing row over Manbij. 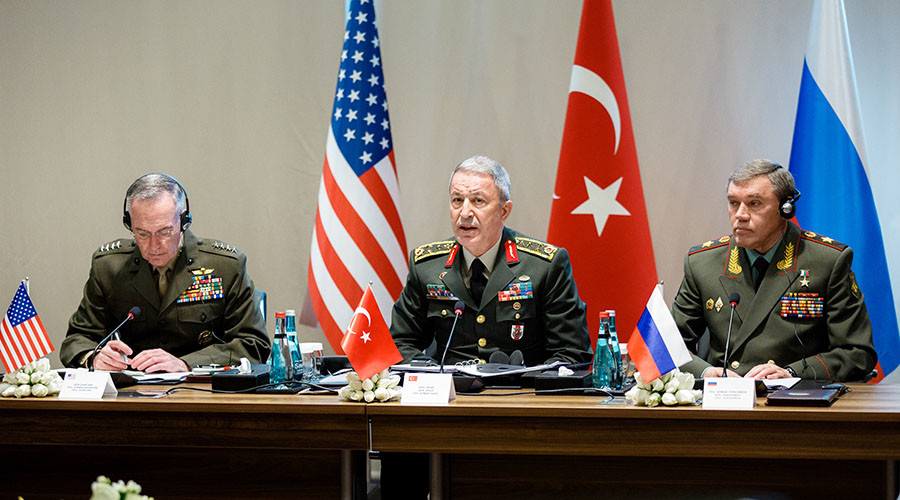 Turkey’s Gen. Hulusi Akar, Marine Corps Gen. Joseph Dunford, the chairman of the U.S. Joint Chiefs of Staff, and Ge. Valery Gerasimov, the chief of the Russian General Staff, are discussing “joint issues related to regional security, including Syria and Iraq,” the Turkish military said in a statement.

“There is a need for an effective coordination in the efforts to clear Syria of all terror groups because so many countries involved there. If we cannot establish coordination, the risk of a conflict that we would not desire can emerge,” Turkish Prime Minister Binali Yildirim told media members. “That’s the central aim of the meeting.”

“Generals underlined the importance of taking additional steps to prevent incidents during operations,” it said.

The Russian statement serves as a stark reminder given that Russia mistakenly killed three Turkish soldiers in an accidental airstrike last month. The ramifications of that tragic incident still loom large over the nature of debates between Turkish and Russian military officials as both sides meticulously seek to coordinate their activities to avoid another accident.

“They are working for the parties not to interfere with each other’s operations,” the Turkish prime minister elaborated over the content of discussions between generals.

The puzzling web of complications rooted in multisided war theater has created a quandary for the U.S. which is treading a delicate line between its urgent goal to defeat ISIS by capture of Raqqa and not to alienate its longstanding NATO ally, Turkey. But the fast-moving developments of the battleground produce its own set of realities as outside powers are driven by rapidly changing political territory of local conflicts.

Speaking in Ankara on Tuesday, Turkish President Recep Tayyip Erdogan again vowed to strike Kurdish forces. “We can clear Manbij together, then we can clear Raqqa together,” he said.

Manbij has emerged as the latest flashpoint that has pitted Turkey and U.S. against each other. To directly avoid Turkey-allied forces, Syrian Defense Units (SDF) relinquished control of several villages to Russia-backed Syrian troops that could form a buffer zone between Kurds and the Turkish forces. The U.S. deployment of heavy weapons and nearly 500 soldiers in and around Manbij is a clear-cut message to Turkey that Washington does not want a Turkish assault against the city.

The move aims to defuse ensuing tension over Mnabij. Pentagon Spokesman U.S. Capt. Jeff Davis described the deployment as a “visible sign of deterrence and reassurance.” In a veiled message to Turkey, he said “there is not a need for others to advance on it [Manbij] in attempt to “liberate” it.”

Russia periodically brokers cease-fires between Turkey-backed rebels and Syrian government troops in front lines around al-Bab and Manbij to avoid outbreak of another front in the war. The balance of power on the ground is not fixed and subject to constant change.

However strong and unyielding Turkey’s objection might be against a Kurdish role in Raqqa offensive, the undercurrent is this: the American military officials are tempted to move forward along with Kurdish-dominated SDF.

Undaunted by the prospect of a political clash with Turkey, the U.S. does not seem to buckle to Ankara’s ever-growing pressure and its threats. The meeting provides an opportunity for the American side to explicate its position vis-à-vis Manbij and Raqqa.

Upending Turkey’s long-held expectations, the U.S. appears to cooperate with the YPG for Raqqa offensive.

“… It appears that the U.S. may carry out this operation with the YPG [People’s Protection Units], not with Turkey. And at the same time the U.S. is giving weapons to the YPG,” a senior Turkish official said in remarks to Reuters. Speaking in candid terms over the consequences of such a step, the official warned of a considerable cost for the Turkish-American relations if the U.S. military goes with this plan.

Turkey find itself boxed in northern Syria in an uncharted territory amid rapidly shifting realities on the ground. Its cooperation with Russia in Syria is also fraught with conflicting interests and priorities as Moscow backs President Bashar al-Assad’s regime, arch-enemy of Turkey, and cultivates strong ties with the Syrian Kurdish militia.

President Erdogan is expected to discuss shaky geopolitical ground in northern Syria with his Russian counterpart Vladimir Putin in an upcoming visit to Moscow on Thursday in a bid to seek Putin’s backing for Turkey’s military moves. Russia is anxious over ambiguous nature of Turkey’s military expansion. Neither Russia nor the U.S. appear willing to let Turkey expand beyond al-Bab.

To the dismay of the Turkish government, the U.S. seemingly has reservations over Turkey’s portrayal of Free Syrian Army rebels as a potent force to take over Raqqa, and remains cautious despite Ankara’s push for inclusion of its rebel allies in the Raqqa offensive. The American military officials see SDF as a capable force for the leading role in Raqqa campaign, a key point of contention that fuels discord between two allies. For Turkey, YPG is just an extension of its domestic insurgent group, Kurdistan Workers’ Party or PKK.

And Antalya meeting exposes those divergent views palpably. The dispute appears to remain unresolved for the time being, while Manbij has potential to poison the Turkish-American relations in the near future.

Turkish Women Say No to Masculine Culture And One-Man Rule