Satellite imagery reveals the scale of destruction in historic Sur district of Diyarbakir.

Last year, a photo from Nusaybin, a Kurdish-populated town in Turkey, quickly went viral on social media because it showed a dystopian scene of obliterated buildings dotted with Turkish flags. It illustrated how the Turkish military held control over the town only after reducing it to rubble. 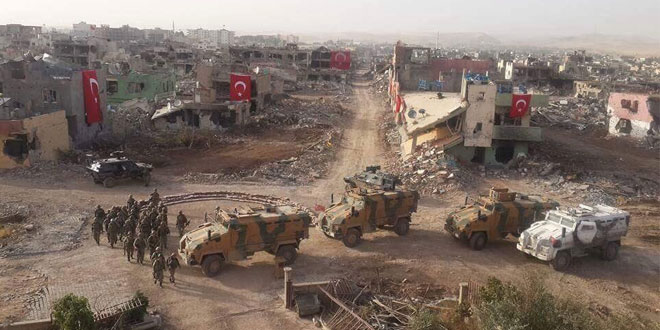 Pro-Kurdish journalist Zehra Dogan, who is also a painter, slightly modified armored vehicles into monstrous scorpions. Ms. Dogan, who spent 5 months in jail last year and released in December, was sentenced to nearly 3 years in prison for her painting. She was accused of drawing Turkish flags on debilitated buildings. 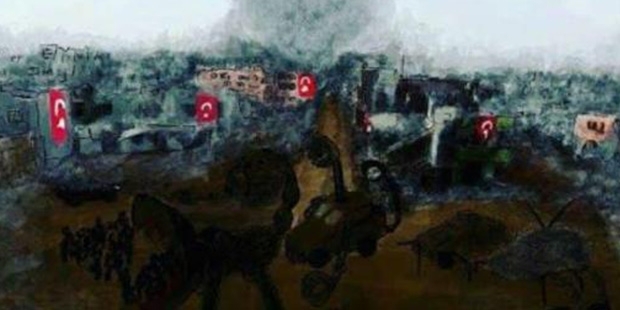 In a country where painting the Kurdish plight warrants a prison sentence, civilians are most often the biggest victims. A new report by the United Nations confirmed that Turkey’s counter-insurgency operations against Kurdish militants in urban areas across southeastern Turkey has killed hundreds of civilians in cities.

The UN Human Rights Office said in a recent report that it is “particularly alarmed about the results of satellite imagery analysis, which indicate an enormous escape of destruction of the housing stock by heavy weaponry.”

The UN report represents the most high-profile accusation from an international organization after reports by Human Rights Watch (HRW) and Amnesty International released similar studies addressing gross human rights violations and indiscriminate killing by the Turkish security forces in the Kurdish southeast.

What differs the UN report from previous ones is its official nature as a team of UN investigators from the UN Human Rights Office concluded, after conducting the search on the ground, that Turkey’s heavy-handed dealing of the security threats in Kurdish-majority southeast led to heavy civilian casualties.

The report details what unfolded in southeastern Turkey between July 2015 and December 2016, noting that the operations affected more than 30 towns and led to displacement of nearly a half million residents.

In Nusaybin, a town in the southeastern province of Mardin near the Syrian border, 1,786 buildings have either been destroyed or damaged, while 70 percent of the buildings in eastern part of Diyarbakir’s Sur district were systematically destroyed.

In Cizre, people portrayed “an apocalyptic picture of the whole scale destruction of neighborhoods.” In February 2016, “189 men, women and children are trapped for weeks in basements without water, food, medical attention and power before being killed by fire, induced by shelling,” family members of victims and witnesses told investigators. Similar accounts of gut-wrenching tragedies about mass-killing of people in basements by fires, shelling also took place in HRW and Amnesty International reports.

“The subsequent demolition of the buildings destroyed evidence and has therefore largely prevented the basic identification and tracing of mortal remains,” the report says.

The report describes how one woman’s family “was invited by the public prosecutor to collect her remains, which constituted of three small pieces of charred flesh, identified by means of a DNA match. The family did not receive an explanation as to how she was killed nor a forensic report. The victim’s sister, who called for accountability of those responsible for her death and attempted to pause a legal process, was charged with terrorist offenses.”

Turkish authorities deny any responsibility and dismiss charges as a smear campaign against Turkey. Turkish officials deny access to investigators to conduct an independent inquiry in the affected areas.

After June 7 parliamentary elections in 2015, President Recep Tayyip Erdogan and the Kurdistan Workers’ Party (PKK) renewed fighting after the collapse of 2 and 1/2-year ceasefire. Critics of Mr. Erdogan believe that he intentionally killed the fragile truce to stir up nationalist sentiment to offset his party’s loss of parliamentary majority. After 5 months of political deadlock as the ruling AKP was unable to forge a coalition government with any other political party represented in Parliament, new elections took place. Nov. 1 parliamentary elections held same year gave another single-party government to Mr. Erdogan’s party.

The crackdown on Kurdish political party officials, Kurdish media, non-governmental organizations and civil society groups across southeast has reached to an unprecedented level since the failed coup. The security forces also doubled down its operations in urban areas, leading to massive destruction.

What worsened the civilian toll is the round-the-clock curfews in towns, a practice that left civilians trapped in crossfire between PKK militants and security forces, while also deprived them of basic goods needed to maintain their lives: water, food, electricity and other medical aids.

During escalation of violence across the southeast, nearly 800 Turkish security forces members have been killed, while 1,200 residents, who may or may not have been engaged in violent actions against the state, also died the report reveals. Ankara-based Human Rights Association (IHD), which monitors the conflict in Southeast, recently said that the government forces had killed 317 civilians during clashes.

UN High Commissioner for Human Rights Zeid Ra’ad Al Hussein said he is “particularly concerned by reports that no credible investigation has been conducted into hundreds of alleged unlawful killings, including women and children over a period of 13 months between late July 2015 and the end of August 2016.”

“It appears that not a single suspect was apprehended and not a single individual was prosecuted,” Mr. Zied said.

Erdogan to Merkel: Shame On You