Zeki Aksakalli is a famous general leading the Turkish troops in northern Syria. When he was dispatched to Syria, he was given a hero’s farewell for his role in thwarting the failed coup attempt last summer.

This commander of elite special forces has secured a distinct place in the collective memory and high esteem of Turks for his “shrewd, astute and brave standing” against coup plotters. His order to kill one of the leading plotting generals on that night is one of the most remembered episodes of the military uprising on July 15.

On July 15, Gen. Aksakalli was the commander of a key military headquarters in Ankara, the Turkish Special Forces. He allegedly called Gen. Semih Terzi from Diyarbakir, a southeastern province, to the capital on that night. Gen. Terzi convened his entourage and took off for Ankara. In less than an hour, his plane landed in Etimesgut, an Ankara district. A helicopter was waiting for them at a military airport in Etimesgut. Gen. Terzi and some of his lieutenants took the chopper to go to the Turkish Special Forces headquarters.

Capturing these headquarters was so crucial that it would have been a breakthrough for the course of events that night if Gen. Terzi successfully took control of it. It would have meant a turning point for the coup plot. It fell on Gen. Aksakalli’s shoulders to make sure that Gen. Terzi could not capture the headquarters.

Here comes the confusing part: Didn’t Gen. Aksakalli invite Gen. Terzi to Ankara? According to the government, no, never. But testimonies of defendants revealed that Gen. Terzi was invited by Gen. Aksakalli.

Back to the story. While Gen. Terzi was on his way to the headquarters, Gen. Aksakalli phoned non-commissioned officer Omer Halisdemir. “Son, Gen. Terzi is a traitor, he is a coup plotter. You have to kill him. But it is possible that you may die too.”

Mr. Halisdemir, who prevented Gen. Terzi from entering the Turkish Special Forces and who perhaps thwarted the coup attempt, was laying on the ground. Another officer, Mihrali Atmaca, checked Mr. Halisdemir’s pulse and put a bullet to his head. Mr. Atmaca was from Gen. Terzi’s entourage.

Gen. Terzi was taken to GATA, the major military hospital in downtown Ankara, but succumbed to his fatal wounds later at that night. The bloody episode turned Gen. Aksakalli into a hero and the fallen noncommissioned officer a legendary figure, elevated him into a mythic, immortal status tirelessly nurtured by the government media. 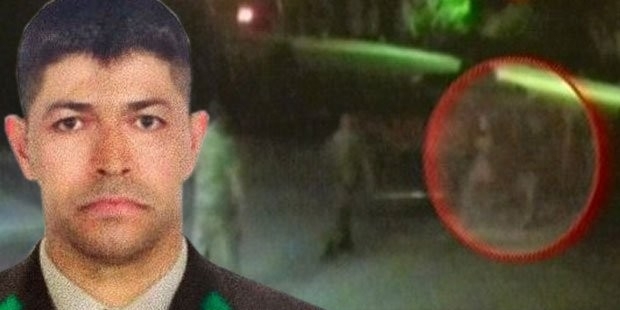 Mr. Halisdemir’s killing of Gen. Terzi had become a turning point in the coup plot. Turkish authorities even erected his statue after the coup attempt — a dedication to a military officer who dared to confront the plotting general.

The battle for the control of special forces was depicted by the government as one of the most crucial moments of the coup that shaped the fate of the military insurrection and the nation. So was the master narrative of the government, replayed and repeated by its loyal and pliant media over and over again.

In the absence of alternative accounts of the fast-moving events of that night, the government’s version of the story — the only source of public information until recently — did hold the water, shaped the public belief and contributed to creation of media-made epic heroes of high order that “saved the nation from a disaster.”

But for many critical observers and opposition lawmakers, the government’s official narrative now stumbles into irrelevance when it faced its first test of truth during coup trials in Ankara and many parts of the country. The single line of coup story was disputed and challenged by multiple other accounts, defenses of dozens of defendants at an Ankara court over the past one month.

The more defendants come out and tell a different version, the more government’s simplified account of the coup attempt slips into the crux of rigorous multifaceted questioning. More testimonies consequently give way to more questions and doubts. 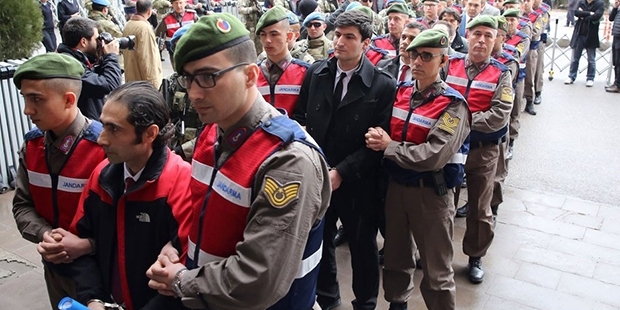 At least 18 military officers face charges of killing noncommissioned officer Halisdemir, taking part in a coup, attempting to end constitutional order and topple civilian government. These are conceivably serious crimes and call for the need for a comprehensive and thorough re-assessment of what really happened at special forces headquarters at the time of the coup attempt.

The Putschist General And A Hero Officer

The names of Gen. Terzi and non-commissioned officer Halisdemir, a talented sniper of the special forces, represent opposite poles of two extreme levels of evil and good. And their encounter at the Special Forces Headquarters made into an epic media tale that dramatized the titanic clash of heroes and traitors.

Where do facts end, where does fiction begin? What is the line between reality and propaganda?

Critics are now increasingly asking why Gen. Aksakalli ordered to shoot his longtime friend Gen. Terzi as soon as he landed at the headquarters. After delving into defenses of the accused officers, legitimate doubts appear to abound over Gen. Aksakalli.

The trials have only widened a palpable chasm between the government narrative and alternative accounts provided by accused plotters’ defenses during hearings.

And suspicion only grew solidified after Gen. Aksakalli refused to appear at the court on March 16. The first hearing took place in February and after several rounds of hearings, judges decided to take the testimony of Aksakalli when the officers accused him of setting Gen. Terzi into a trap.

A colonel in the Air Force who took Gen. Terzi from the southeastern province of Diyarbakir into Ankara told judges that it was Aksakalli who ordered Gen. Terzi to come to the special forces headquarters.

Aksakalli, superior of Terzi, defied flight ban imposed by Chief of General Staff Gen. Hulusi Akar after intelligence obtained earlier in the day over a possible coup attempt. To scotch any move, Gen. Akar ordered the entire army to ground all planes and helicopters, froze all air traffic fro and to military airports. But in the case of Gen. Terzi, who was a prominent general leading counter-insurgency operations against Kurdish PKK militants in the southeast, Commander Aksakalli defied the ban and provided a military plane for Gen. Terzi to bring him to Ankara, defendants told the court.

The claim repeated by a number of officers who blamed Aksakalli for his double acting during coup night. Col. Huseyin Cakiroglu, an air force pilot who brought Gen. Terzi from Diyarbakir told judges that it was impossible for Gen. Aksakalli for not knowing the unfolding coup plot in advance, calling for bringing him to the court.

Major Mehmet Saglam who used the chopper that brought Gen. Terzi to the headquarters also accused Gen. Aksakalli. All defendants underlined that they simply followed orders, and had no prior knowledge of the coup attempt.

What most jarred and shocked the defendants, in one account delivered by Major Saglam, was Gen. Aksakalli’s treatment of his fellow comrades. Saglam said he and other officers of different ranks were tortured by their fellow friends whom they had a long history of friendship in the army. The torture at the headquarters was carried out upon order from Gen. Aksakalli and another colonel.

“After delivering us to police, Gen. Aksakalli told them “You know what to do with them,” and police said “Do not worry, we will take blood from them with a needle”.”

“Everybody was groaning and whimpering at some corner at the police station after untellable torture,” said the major who declined to elaborate on the specifics of the disgraceful torture citing the presence of his wife at the court hall.

Gen. Aksakalli who is currently in Syria defied the court order to appear and said he would never go to the court.

Alarmed by new revelations, the government’s anxiety over to preserve the dominance of its narrative pushed them to impose, directly and indirectly, censorship on media coverage of the trials.

Another crucial piece of information that could shed light on the position of General Staff and Army Chief Gen. Akar has come to the media spotlight. A day before the coup attempt, Gen. Akar and National Intelligence Organization (MIT) Undersecretary Hakan Fidan met at the same place, special forces headquarters, during a graduation ceremony of new cadets, an event that normally used to take place on Fridays, but for unknown reasons the date was re-designated to be Thursday for last year.

With an odd coincidence, the ceremony was arranged for the day before the coup. Mr. Fidan whose rapport with the army chief was a matter to be publicly known, held a private meeting with Gen. Akar that lasted six hours.

That happened a day before the coup. According to the official coup narrative, Intelligence Chief Fidan informed the army chief about coup preparations on Friday, around 4:00 p.m. and the two had a meeting at the military headquarters in Ankara for hours to revise plans to counter any coup move. Then, the coup began to take place around late 9:00 p.m.

What could they have discussed for so long a day before the coup? Was Gen. Akar among the coup plotters, or was he a victim of the attempt? Or did he know the plans well before Friday?

Those questions only pile up with every new revelation during coup hearings. Last week, an alleged putschist army officer told judges in Gaziantep that Gen. Akar was head of the coup junta, the Peace At Home Council. The mystery only smolders given that key actors of the coup either did not appear at parliamentary commission investigating the failed attempt or refused to go to court.

Neither President Recep Tayyip Erdogan, nor Prime Minister Binali Yildirim nor Intelligence Chief Fidan bothered to attend commission hearings in Parliament. The Commission first attempted to send them a list of questions over their role during coup night, but then abandoned to deepen the investigation upon President Erdogan’s public call to end its mission.

Without even answering critical questions swirling around Mr. Erdogan and the government, the lackluster intelligence agency, the parliamentary commission pulled off the inquiry with little progress. The core of its activities revolved around Gulen movement rather than ascertaining the truth about the attempted coup, which killed 241 people and wounded 2,000.

The coup’s reverberations and rippling effects are still with the Turkish politics and society amid ongoing arrests and purge of public officials. To enlighten any remaining mysterious point rooted in the coup appears as an urgent task after 45,000 people were jailed, 105,000 detained and more than 135,000 public servants dismissed.

But with key actors refusing to talk, the unknowns of the coup saga overwhelm and outnumber its known aspects, and do not match with the government’s much-repeated narrative.