81 US Lawmakers Urge Trump To Press Erdogan On Rights

81 members of the U.S. Congress have urged President Donald J. Trump to press his Turkish counterpart on Turkey’s deteriorating human rights record, underscoring that Washington should be candid with Turkey regarding its rights agenda.

“As you prepare to welcome President Recep Tayyip Erdogan to Washington D.C., we write to express our serious concerns about the continuing erosion of human rights and the dramatic decline of democratic values in Turkey,” the lawmakers said in a letter.

The lawmakers strongly urged President Trump to make “these issues a priority during your meeting with President Erdogan.” 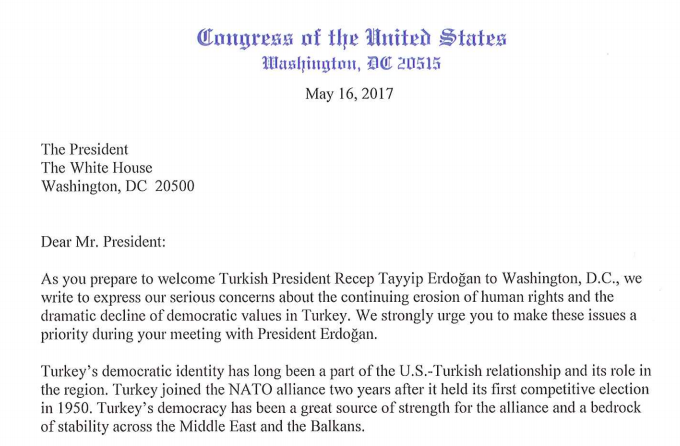 The letter was sent to President Trump on Tuesday morning, just hours before his meeting with Mr. Erdogan. Representatives Bradley S. Schneider and Bill Johnson are two sponsors of the letter.

It said Mr. Erdogan and his allies have mounted a continuous assault on the rule of law, particularly using the courts to stifle fundamental rights including free speech, to quash any opposition to their undemocratic actions.

“They have thrown thousands of Turks in jail, on shaky and political grounds, particularly journalists reporting on their actions, and left many of their citizens, and even Americans in Turkey, fearful of their own futures,” the letter noted.

The members of the Congress said they are particularly troubled by the recent constitutional referendum, which suffered from a lack of transparency and lays the groundwork for Mr. Erdogan to further undermine democratic institutions.

The referendum campaign, the letter said, was held under a state of emergency in a tightly controlled media environment where critical voices from the press and civil society were jailed. Journalists have been targeted as the Turkish media is subjected to censorship and intimidation by the Erdogan government.

On Tuesday, President Trump met with Mr. Erdogan at the White House, discussing a range of topics, including the ongoing conflict in Syria. Ahead of their working luncheon, both leaders held a press conference. Mr. Trump, largely praising Turkey’s history of strong partnership with the U.S., avoided mentioning Turkey’s human rights troubles, and instead praised Ankara’s efforts to battle terrorism in Turkey and in the region.

It was not clear if President Trump was going to push Mr. Erdogan to mollify his position in cracking down opponents, as he did relentlessly since the military coup attempt. 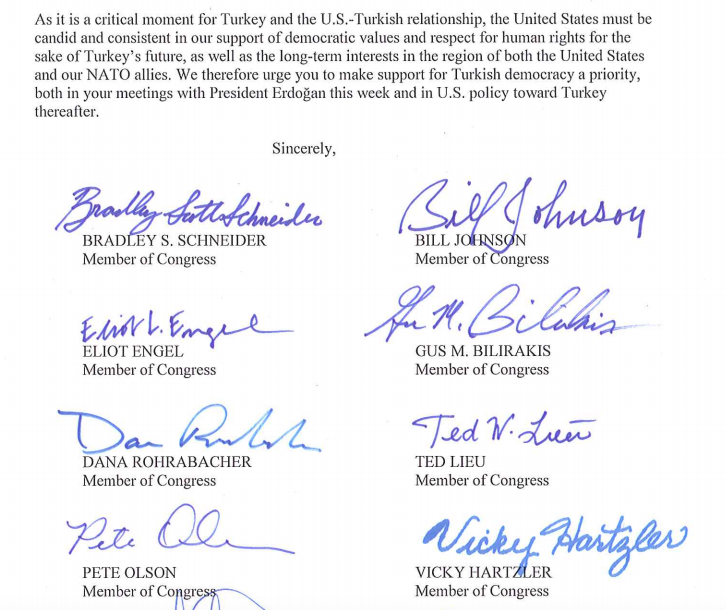 The representatives said in the letter that the Turkish government has also increased direct threats against political opposition groups and minority communities including ethnic Kurds. The government has continued its aggressive crackdown since the April 16 referendum.

“As it is a critical moment for Turkey and the U.S.-Turkish relationship, the U.S. must be candid and consistent in our support of democratic values and respect for human rights for the sake of Turkey’s future, as well as the long-term interests in the region of both the U.S. and our NATO allies. We, therefore, urge you to make support for Turkish democracy a priority, both in your meetings with Erdogan this week and in U.S. policy toward Turkey thereafter.”

The letter was also submitted to Secretary of State Rex Tillerson.

Enemy of the People -- Cartoon/Latuff