During his march to Istanbul from Ankara, CHP leader Kemal Kilicdaroglu carries a banner reading 'Adalet' or 'Justice' in English.

After the imprisonment of a prominent lawmaker from main opposition Republican People’s Party (CHP) on Wednesday, CHP leader and thousands of party supporters have begun a 250-mile long march to Istanbul from Ankara to protest the court ruling.

“We are facing a dictatorial rule,” CHP Chairman Kemal Kilicdaroglu said before launching the march in Ankara. Citing the lack of justice in Turkey, he said “enough is enough,” and set out the march to rattle the country’s divided political landscape with an impact.

Thousands of people flocked to streets with banners reading ‘Adalet’ or ‘Justice’ in English, demanding an end to the state of emergency and the government’s expanding crackdown on opponents. 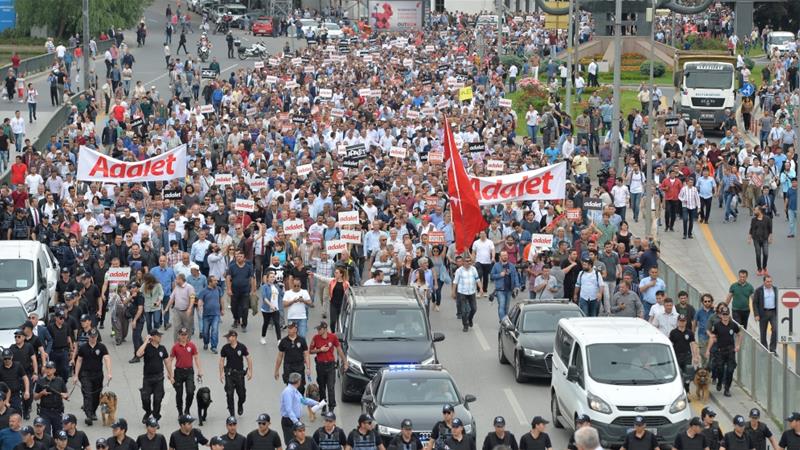 The discontent with the government purge has found a strong expression during the march, with people personally citing their reason to join the protest: “I’ marching for the purged to take our jobs back, I’m marching for the freedom to imprisoned people.”

“If we will live in this country together, the existence of justice is a must. There is no state or human, where there is no justice,” the CHP leader said, explaining the rationale behind the protest.

He added: “Our march will continue until there is justice in this country.”

CHP lawmaker Enis Berberoglu was arrested by an Istanbul court after a hearing at Caglayan Courthouse on Wednesday. He denounced the decision, deeming it as a blow to journalism in Turkey.

He was given a 25-year prison sentence over charges of espionage after he leaked a video to the Cumhuriyet daily in May 2015. The Cumhuriyet daily run a detailed report and released a video purportedly showing weapons loaded trucks destined for Syria. Security forces intercepted the trucks in January 2014 and a subsequent investigation has been launched.

The trucks turned out to had belonged to Turkish intelligence service.

“The defendant has committed the crime of disclosing information that should remain secret for state security, domestic and external benefits, with the aim of political and military espionage,” the court said in its decision.

Why Do ‘Non-Lethal’ Weapons Maim and Kill Protesters?

Not Accepted: The Tale of an Iraqi Human Rights Activist in Turkey

Syria’s War, Victims, and How Those Most Complicit Rationalize Horrors

Begin Again: A Book for Our Times and a Reminder of Admonitions Ignored

After RBG: Potential Tyranny of the Minority

Why Do Mainstream Media Sugarcoat Trump’s Attacks on Democracy?

Big Promises, but Can China Be Carbon Neutral by 2060?

Begin Again: A Book for Our Times and a Reminder of Admonitions Ignored

After RBG: Potential Tyranny of the Minority

Why Do Mainstream Media Sugarcoat Trump’s Attacks on Democracy?

Want More Women in Leadership Roles? Focus on Their Strategy and Not Their Smile