Opposition Leader Demands Justice For All At Istanbul Rally

More than a million of people gathered in Istanbul on Sunday to demand justice, marking the culminating of 250-mile long march launched 25 days ago in Ankara, a protest that reinvigorated Turkey’s beleaguered opposition.

Main opposition Republican People’s Party (CHP) leader Kemal Kilicdaroglu spoke to nearly 1.5 million people, addressing the widespread human rights violations under the state of emergency, which is braced for another extension this summer. He said his party demands justice not only for an imprisoned CHP lawmaker but for all people.

“This march is not an end, but it is our first step. July 9 is a new dawn, new climate, a new beginning” he said in his address to the crowd. 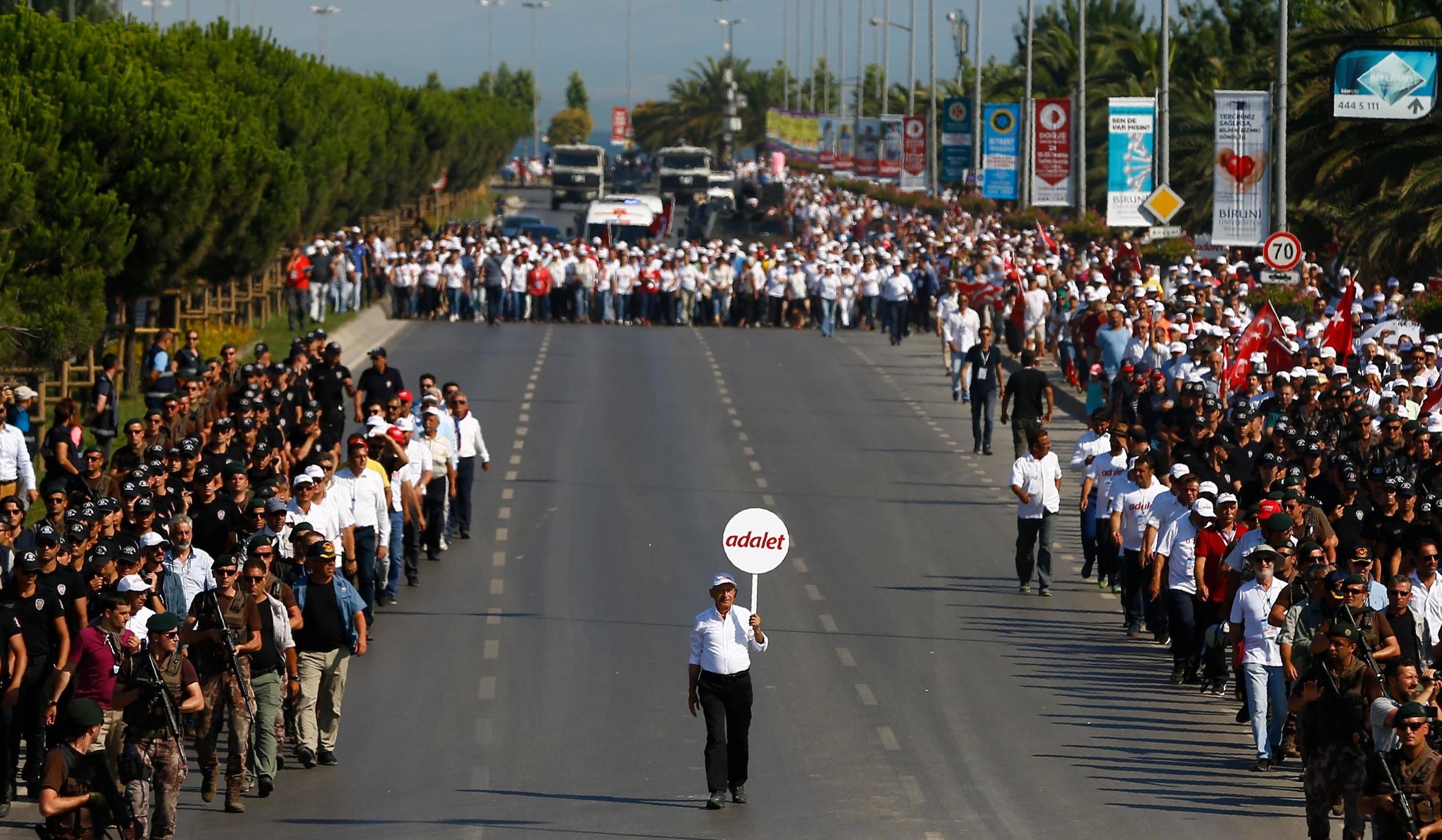 The 250 mile-long march drew 10,000s of people from all walks of life, stirred sharp rebuke and threats from President Recep Tayyip Erdogan who, on some occasions, likened the marchers to “terrorists.”

But CHP members dismissed government accusations as nonsense. Still, CHP leader tried to avoid politically charged, sensitive issues during the march and even adopted government line when he portrayed Gulen movement as a “terrorist group.”

“This march will not end until all our demands are met. This just march has just begun, we will destroy the walls of fear. The last day of our Justice March is a new beginning,” the sunburnt 68-year-old politician told Istanbulites.

CHP leader who faced intra-party insurgency after a controversial referendum in April over his meek stance in the face of allegations of voter fraud, ballot box irregularities, has emerged with a new image of fighter politician.

He challenged the government, which is preparing to mark the first anniversary of a bloody coup attempt next week with great fanfare, saying that it is the marchers who will protect the country in case of another putsch.

After 25 days of walking, 10,000s of people entered Istanbul on Sunday in the largest popular protest since Gezi Park protests in 2013 summer.

A sense of jubilation was the prevalent mood when the marchers arrived in Istanbul.

A sense of the vibe as the #JusticeMarch arrived in Istanbul. Our full story: https://t.co/KdmXShA9nY #Turkey #cbc @CBCNews #adaletyürüyüşü pic.twitter.com/MyCv39G39T

During his address, often interrupted by applause and chants, the main opposition leader repeated his earlier calls for the lifting of the state of emergency.

But Mr. Kilicdaroglu also outlined a broader set of goals, a new agenda for the government urgently to implement in order to preserve democracy and social peace.

With unveiling a detailed policy prescription, he unseated President Erdogan after a long time in terms of agenda setting, getting the upper hand to alter the political landscape in the months to come.

“249 people lost their lives, yet the political front of the attempted coup is not known. Reveal all the politicians involved in the coup,” he urged the government to enlighten mysteries of the coup saga.

The main opposition leader who initiated the march in Ankara a day after CHP lawmaker Enis Berberoglu had been imprisoned over espionage charges, believes that the coup attempt still remains in the dark. To him, the government intentionally blocks efforts to shed light on all tangled elements of the putsch, which has unleashed a sweeping purge across all sectors of civil service, left the army and judiciary dangerously fractured.

He called on the government immediately to end the emergency rule. He said the coup attempt was used as a pretext by the government to launch its counter-coup under the guise of the state of emergency. The CHP leader called for a quick restoration of rule of law in international standards.

He said Turkey is now living under a dictatorial regime similar to Germany of 1940s. With the march, the CHP leader said, the walls of fear were torn apart. He called on members of judiciary who rule under direct pressure and even instructions from the presidential palace to leave their posts to open ways for fearless, non-obedient prosecutors.

Here are the major tenets of his demands:

Among themes that dominated his comprehensive speech, foreign policy also emerged as a problematic area to be tackled with. For CHP leader, aggressive foreign policy rendered Turkey less secure and unstable, calling for the government to turn its face to the international community which respects human rights and rule of law.

The Story of A Long March

The march took place against a myriad of odds and steep challenges. People from different ages, old and young, man and women, walked mostly more than  80 Fahrenheit under sweltering summer heat for 25 days.

BBC Turkey Correspondent Mark Lowen expressed his bewilderment regarding stamina and determination of the people as he felt exhaustion after his first day of walking last week.

After one day following #JusticeMarch I am hideously sweaty, feet ache and I'm knackered. How people have done this for 19 days bilmiyorum

The march grew bigger in the western province of Izmit, the last province before Istanbul, last week as marchers were preparing to enter Istanbul. Protesters carried 1,000 meters of long Turkish flag along the famous E-5 highway in a way to refute President Erdogan’s treachery remarks. 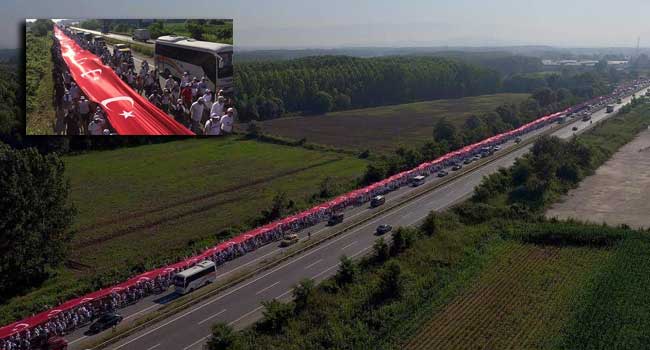 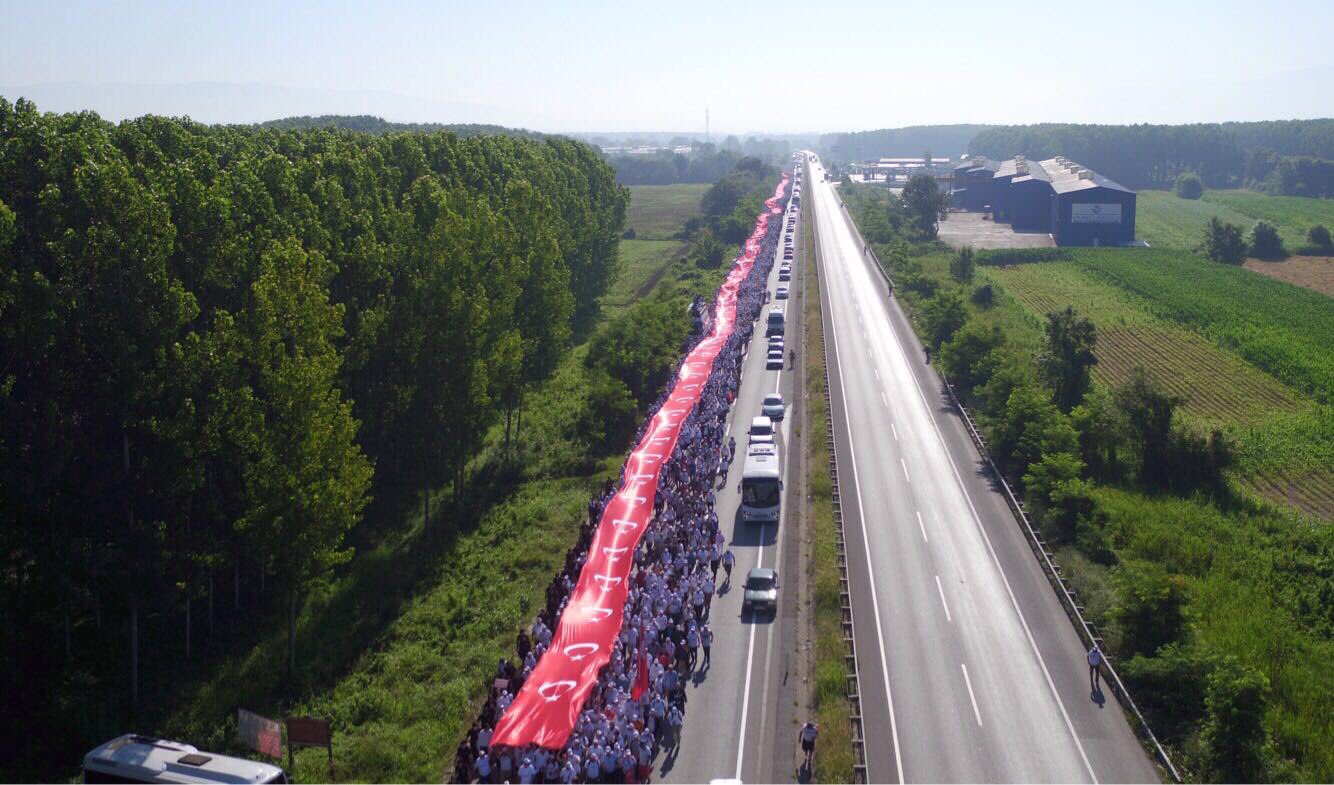 To grasp the nature of support and how people defied odds, the story of a man tells it all.

Among 1000s at Turkey opposition's #JusticeMarch is a visually-impaired man: Walked 400 km so far!
Via @tugbatekerekpic.twitter.com/kvZEf9PhBn 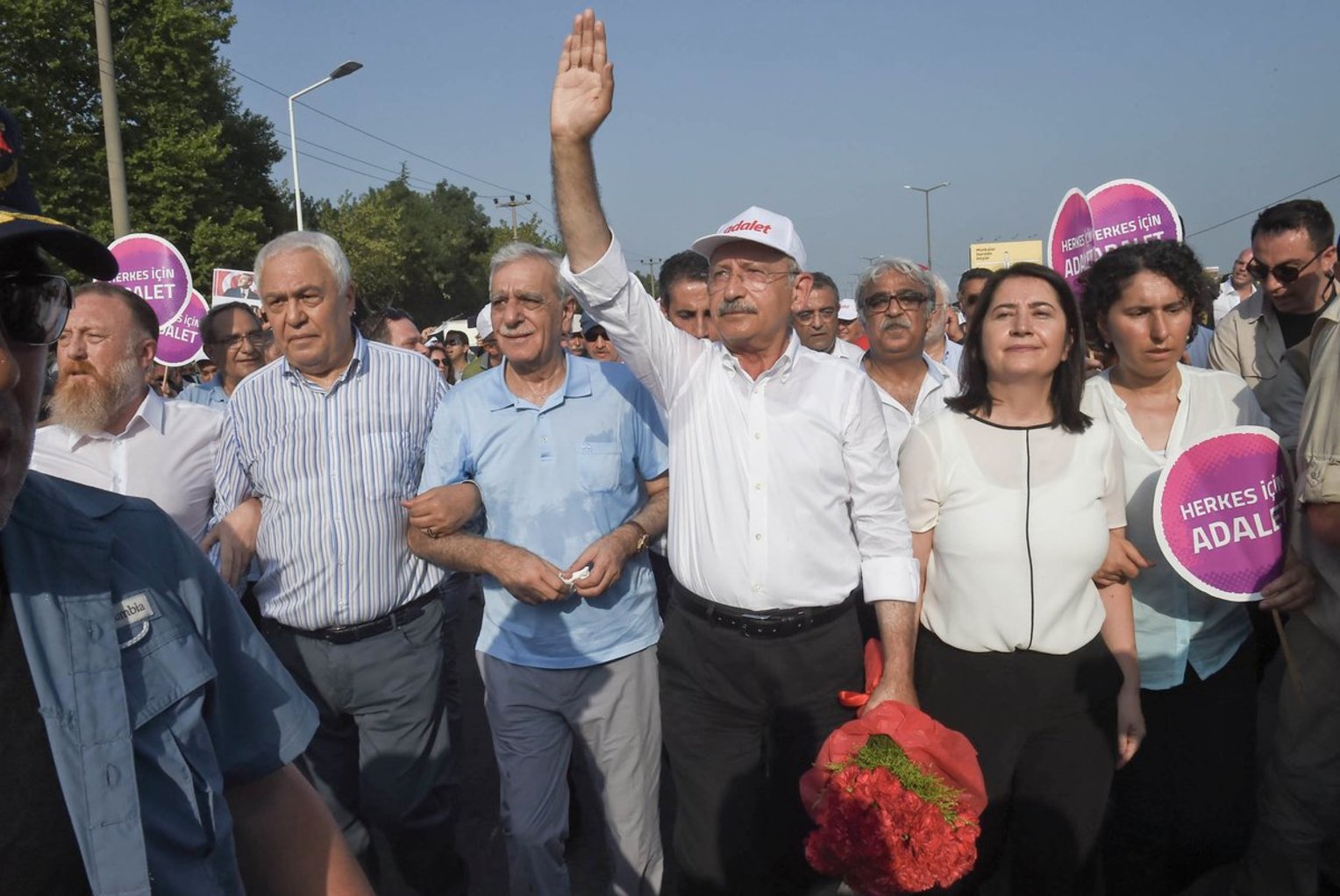 And, PEN International’s Turkey center members also joined the march, revealing the level of support for the opposition’s cause.

The march offered a rare chance to the government opponents to express their discontent with the ongoing crackdown and sweeping purge. Purged academics, public servants, and those whose relatives are kept in prison with no indictment joined en masse.

Veysel Kilic, the old man in the photo, and Mehtap Tekin joined together in their demand. The old man has been seeking justice for his son, an air force academy student who has been kept in prison now for a year. 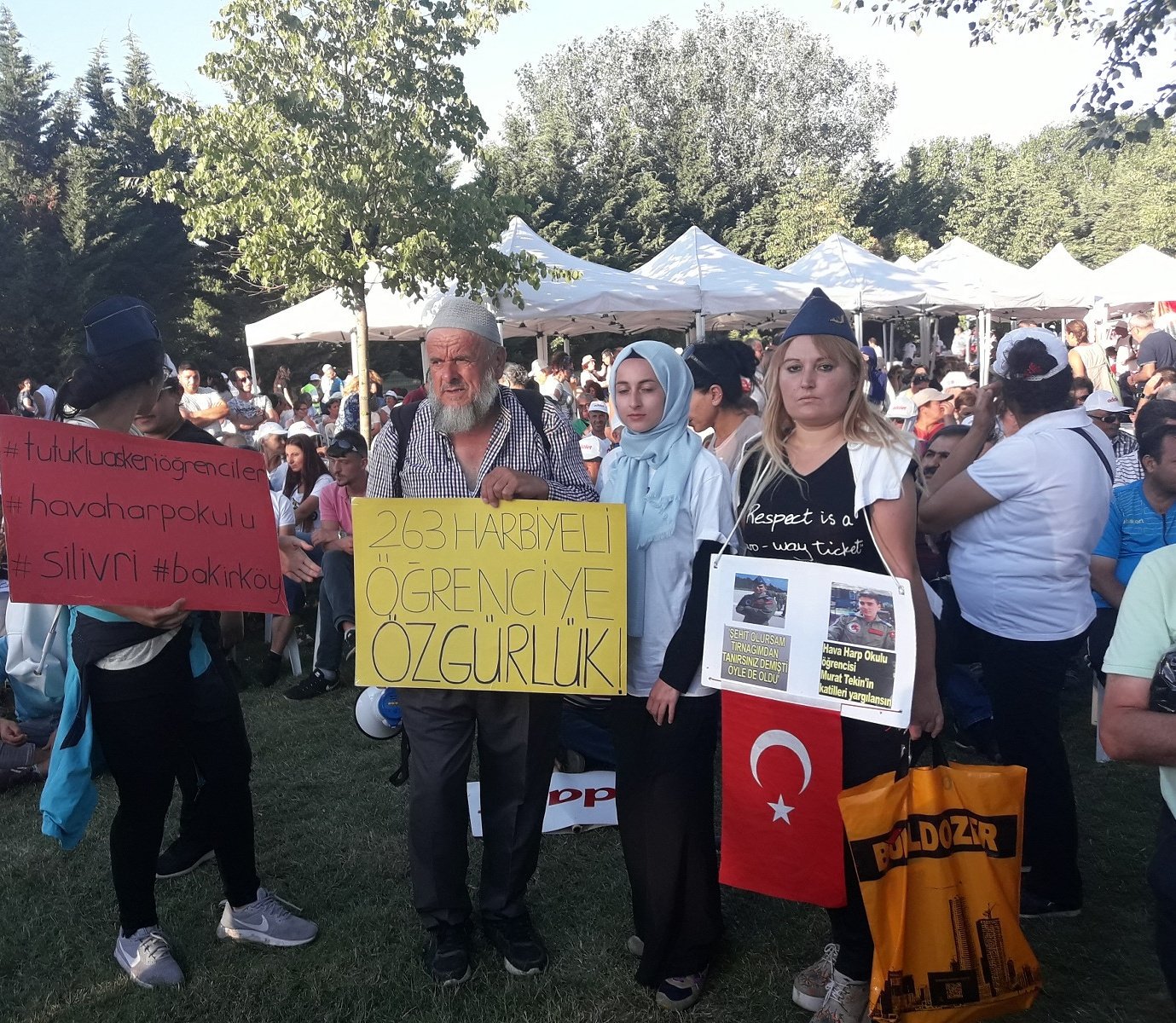 Mehtap Tekin’s young brother Murat Tekin, another air force academy student, has been brutally killed on Istanbul Bosporus bridge during coup night last year. She wants those who cut his brother’s throat in mob lynching to be brought to justice.

But they were not there only for their beloved ones. As the old man held a banner, they were demanding justice and freedom to all of the 263 Air Force Academy and Military Academy students who became victims of the putsch. Their commanders told them they would take part in a nationwide military exercise.

That exercise later turned out to be a putsch by some factions of the army and was decisively defeated by government supporters and loyal police forces.

During his address, CHP leader mentioned Veysel Kilic by name and personally thanked him for seeking justice to the purge victims of the military.

The entire crowd of 1.5 million people erupted in a standing ovation and applause for Veysel Kilic who became one of the symbols of the march.

US Diplomatic Surge In Afghanistan Is Poised To Make It Worse

The Vaccine Battle Highlights the Need to Communicate Science

Threatening Democracy: The Choice Between Progress and Extremism Has Never Been So Clear

Riots at Capitol Hill: Darkness Before the Dawn?

Who’s First-in-Line for the Vaccine? A Classic Problem in Medical Ethics