World Needs to Speak up Against Myanmar’s Crackdown on Rohingya

COX’S BAZAAR, Bangladesh — The scale of the displacement of Rohingya civilians, the systematic way Rohingya villages have been destroyed, and survivors’ common claims of being instructed by the Myanmar military to go to Bangladesh, can leave little doubt Myanmar’s ongoing military operation in Rakhine state aims to not only quell militants, but to illegally force all Rohingya out of Myanmar.

The Rohingya have been subjected to decades of sustained discrimination by Myanmar’s authorities but the scale of the violence currently being inflicted by Myanmar’s military is unprecedented. The military is in control of large portions of Rakhine state and they continue to bar U.N. investigation teams, independent media, and most humanitarian actors.

The consequence of this military action is a population displacement of a scale and speed not seen in the region since the Second World War. The methods being used by Myanmar’s military are brutal, and were frequently explained to me by the refugees I met in the sprawling camps that have grown quickly along the Bangladesh/Myanmar border. 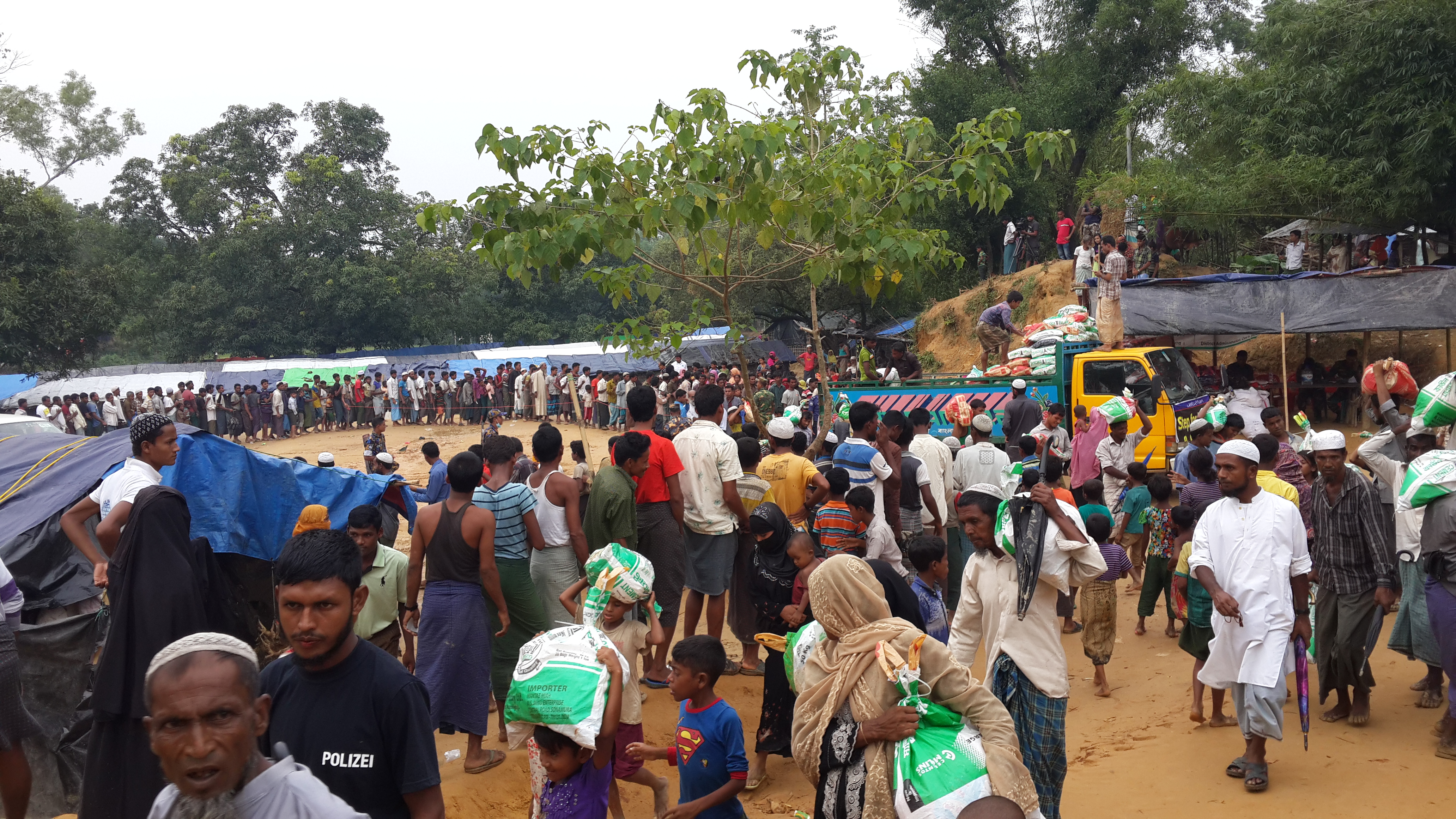 Rohingya refugees talked of Myanmar’s military shooting indiscriminately at their wooden homes, arresting the young men, often raping women, burning their homes, and instructing the terrified people to “go to Bangladesh”. Almost 600,000 Rohingya have done just that within the last eight weeks.

At the refugee camps, the scale of the displacement becomes quickly evident and it is astonishing and horrific. Makeshift camps literally stretch all the way to the horizon. These camps are now home to hundreds of thousands of people who are left mostly reliant on international and local food and medical aid.

Pointedly illustrating how much this is a human-made disaster was seeing some young Rohingya children playing marbles beside their new makeshift homes during a break in the monsoonal downpours. This was in Bangladesh where they are safe from Myanmar’s military but within 50 meters of the international frontier. On the other side of the border fence, charred trees in their burnt village were visible. Where Myanmar’s authorities hold sway, Rohingya children like these are not safe.

U.N. researchers too have interviewed dozens of those arriving in Bangladesh. Their stories make for harrowing reading, describe unimaginable cruelty by Myanmar’s military. The military is accused of “brutal” and “well-organized, coordinated and systematic” attacks with the objective of driving Rohingya out of Myanmar and preventing their return. While I’ve been in the camps, I have heard far too many similarly appalling accounts.

These events will stain Myanmar’s international reputation. Its military leader Senior Gen. Min Aung Hlaing should be treated as the war criminal he is. There can be no justification for the atrocities being committed by his troops.

Myanmar’s military should be sanctioned internationally – military cooperation with Myanmar must surely now be unacceptable, arms sales banned and there ought to be travel and economic restrictions placed on military figures.

There have been some laudable moves in this direction already — the UK suspended military cooperation and the U.S. is talking tough about prosecuting rights abusers, but there is little yet in the way of concrete action. This needs to quickly change. The international community needs to back its strong words with immediate actions or Myanmar’s military will continue their genocidal actions towards the Rohingya indefinitely.

The standing of Myanmar’s civilian administration and reputation of Aung San Suu Kyi is similarly in tatters. True, she is not in control of the military but she has not disagreed with their actions, and she refuses to grant visas for U.N. investigators to enter Myanmar. This makes her complicit with the military’s actions in Rakhine.

As the country’s civilian leader she is acting as a political and international shield for Myanmar’s military. Justifying her decision to support the military’s behavior, Suu Kyi said in a recent national address, “no one can fully understand the situation of our country the way we do”.

This is an attempt by Suu Kyi to tell Myanmar’s residents that international criticism of atrocities committed by their country’s military is based on a failure to understand the real situation within Myanmar. But Suu Kyi’s efforts to prevent independent scrutiny of Myanmar’s military show that she knows they have much to hide from the international community and have a good deal to be ashamed of.

This crisis has been created by Myanmar’s authorities and ending the crisis is within their power. The current Myanmar military campaign is the culmination of decades of official discrimination against the Rohingya. In 2015, the International State Crime Initiative (ISCI) described Myanmar’s treatment of the Rohingya as “genocide”.

Based on what I’ve witnessed in the refugee camps and the testimonies I have heard, this is undoubtedly the case. It is important now for the international community to ensure the Rohingya continue to be safe, and that any future return to Myanmar includes a guarantee their human rights, including their right to have a nationality, will be respected. Ongoing foreign aid to Myanmar and the continued absence of economic sanctions must now be contingent on safeguarding the Rohingya’s human rights.

Aung San Suu Kyi believes only people from Myanmar can understand the situation in their country — the Rohingya I spoke with in the refugee camps certainly understand the situation in Myanmar. They say they were hunted from their homes by a brutally violent Myanmar military who instructed them to leave and then systematically destroyed their villages. Sadly, there are around 600,000 other Rohingya refugees with similar experiences to share, but at least on this side of the border, they are safe to do so.

This op-ed was possible with the assistance from Yahiya Khan.

Thousands Go Without Aid Due to Covid-19 Restrictions

UN Appeals for Funds to Shield Refugees from Coronavirus

US Considering Sanctions Against Myanmar Officials over Rohingya Treatment

Anxiety Rises Over Attacks on Media Covering US Protests

Pandemic, Pandemonium, and the November Elections

Welcome to Our American Plutocracy Ruled by Corporate Oligarchs

Pandemic, Pandemonium, and the November Elections

Welcome to Our American Plutocracy Ruled by Corporate Oligarchs

The Pacific Front: Australia and US Must Counter China’s Expansionism

Will Coronavirus Help Push Environmental Efforts or Set Them Back?