Federal investigators have charged President Donald J. Trump‘s two former campaign officials as part of a probe into Russian meddling in 2016 presidential elections while another official pleaded guilty to charges of lying to federal agents.

Mr. Manafort is said to spend nearly $1 million to purchase antique rugs and millions of dollars to buy several houses, including one in SoHo, court documents showed.

Charges against Mr. Manafort and Mr. Gates are based on events that took place between 2006 and 2017 and didn’t include activities linked to the campaign.

The charges also included money laundering, tax fraud, conspiring against the U.S., failing to register as a foreign lobbyist and lying to the federal government. The 12-count indictment accused the former campaign manager of failing to disclose his lobbying efforts on behalf of Ukraine’s former pro-Russian government.

Officials at the White House breathed a sigh of relief after learning that the indictment didn’t include charges related to the alleged collusion with Russia.

“We’ve been saying from Day One there’s no evidence of Trump-Russia collusion, and nothing in the indictment today changes that at all,” White House spokeswoman Sarah Huckabee Sanders told a news briefing.

Mr. Manafort’s lawyer Kevin Downing said in a statement that his client’s work for Ukraine ended in 2014, two years before he joined the Trump campaign. 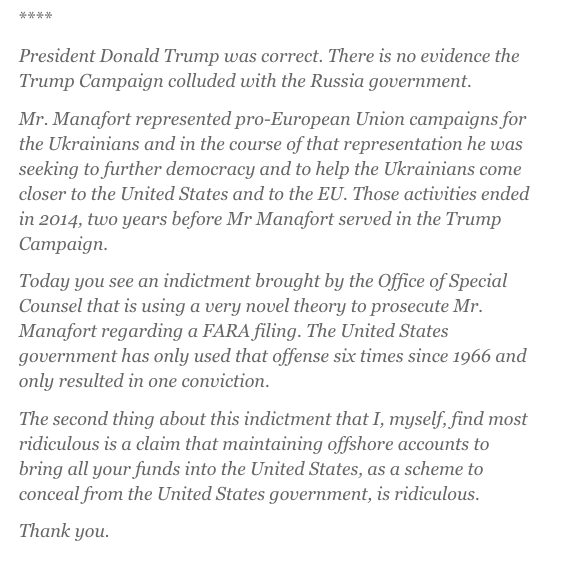 ….Also, there is NO COLLUSION!

Mr. Manafort, 68, is now facing at least 20 years in prison and this may force him to cooperate with Mr. Mueller’s team. He and Mr. Gates surrendered to the FBI on Monday and a court put them under a house arrest.

An hour after the first charges were announced, it was revealed that George Papadopoulos, 31 years old former Trump campaign official, pleaded guilty to lying to federal agents over his contacts with Russia. He also deleted his Facebook account from which he used to communicate with the Russians. He is facing a separate charge of obstructing justice for that.

Mr. Papadopoulos was in fact silently arrested on July 27 in Virginia and pleaded guilty earlier this month. The court documents showed that he went into extraordinary length to establish a link between Russians and the Trump campaign, without any tangible results.

Mr. Trump met with him at least once on March 31, 2016, when Mr. Papadopoulos floated the idea during a national security meeting that the campaign could cooperate with Russians. Then-Senator Jeff Sessions of Alabama shut him down and asked him not to bring this issue up again.

Mr. Papadopoulos’ alleged collaboration with Russians went mostly through a professor in London, whose name was not mentioned in the indictment, but he is believed to be Joseph Mifsud. Mr. Mifsud introduced a Russian woman to the campaign official and said she was the niece of Russian President Vladimir Putin (she was not). He continued discussions with Mr. Papadopoulos hoping that he could hook up Russians with senior campaign managers.

The court documents showed that Mr. Papadopoulos worked for months to collaborate with Russians and communicated these ideas to senior campaign managers. But there was no evidence of him playing any type of role in the hacking of Mrs. Clinton’s emails or using them for the benefit of the campaign. There was also no sign that senior campaign managers were open to the idea of cooperating with Russians as a result of Mr. Papadopoulos’ work.

White House spokeswoman Sanders described Mr. Papadopoulos’ role in the campaign as “extremely limited.” “He asked to do things (and) he was basically pushed back or not responded to in any way,” she said.

Mr. Trump also downplayed his role in the campaign and called him a liar. “… Few people knew the young, low level volunteer named George, who has already proven to be a liar. Check the DEMS!,” Mr. Trump tweeted on Monday.