Amid Growing Discrimination in UK, Minorities are Battling Hate

A few minutes’ walk from the multi-cultural hustle and bustle of Finsbury Park Station in North London stands the Finsbury Park Mosque. The mosque attracts thousands of worshippers a day and is one of the largest mosques in the UK.

It has a complex history, gaining notoriety when radical preacher Abu Hamza became its imam between 1997 and 2003 and was closely associated with Islamic extremism.

After forcibly expelling Hamza and his followers, the current owners have reclaimed the mosque’s reputation and the Finsbury Park Mosque has not been associated with radical views for more than a decade.

A registered charity, the mosque now serves as a community center with outreach programs, welfare services, IT courses, talks and events. The mosque was also the recipient of national award Visible Quality Mark for tackling extremism in 2014.

“What the government couldn’t do, we did in one day. We changed the situation and we kicked out the extremists at that time, Abu Hamza and his supporters, and brought the mosque back to the community,” Finsbury Park Mosque chairman Mohammad Kozbar told The Globe Post.

Despite the remarkable turnaround, the mosque and its community remain a target for hate crimes. This includes the June terror attack, which saw a lone man drive a van into worshippers near the mosque, and an arson attempt in 2015.

These attacks and hate crimes are a stark reminder of the polarization in British society. A problem the Home Office reports as getting worse.

In their recent report, the Home Office detailed the 80,393 hate crimes recorded for 2016/2017. This was a 29 percent increase from the previous year, and the biggest number recorded.

The increase reflects both a genuine rise in hate crimes around the time of the E.U. referendum and improvements in crime recording, a spokeswoman for the Home Office said.

Fiyaz Mughal, director of hate crime monitoring network Faith Matters, has been working with communities to combat extremism. He said the people he worked with were well aware that hate crime was increasing, and had experienced discrimination.

“It doesn’t surprise us; we knew it was coming for years. We have been doing Faith Matters since 2014 and we have seen significant upturn [in hate crime]. It was clear the trend was going up and that fear has risen [within the Muslim community].”

He said the establishment of the Places of Worship: Security Funding Scheme indicated the extent of concern for the safety of faith institutions, particularly mosques.

“Everywhere I go fear has increased. There is a fund from the Home Office which provides support for faith institutions, which I am on the board of. Most of the applications are mosques wanting CCTV, which is a clear indicator of fear.”

Mr. Kozbar has also heard from his community about fear. He said discrimination, verbal and physical attacks were every-day realities for many Muslim women, particularly in London, who were often targeted when wearing a veil or hijab on public transportation.

Living in fear was impacting their physical, emotional and mental wellbeing. “We have women came to us in tears saying, ‘look we can’t take our children to school alone anymore, and we can’t use the public transport anymore.'”

Mr. Kozbar noted that some have said they couldn’t go at night alone and that they needed to have a company like their husbands. “It affects the mental health of some of them,” he added.

Media is Fanning the Flames of Hate

As well as every-day discrimination, UK Muslims also bear a huge amount of antagonism from many popular media outlets.

One of the notable anti-Muslim stories appeared in The Sun, which has the largest daily circulation of any daily newspaper in the UK. A front page in 2015 read ‘One in Five Brit Muslims’ Sympathy for Jihadis’. The tabloid had based this story on a widely debunked interpretation of a poll. 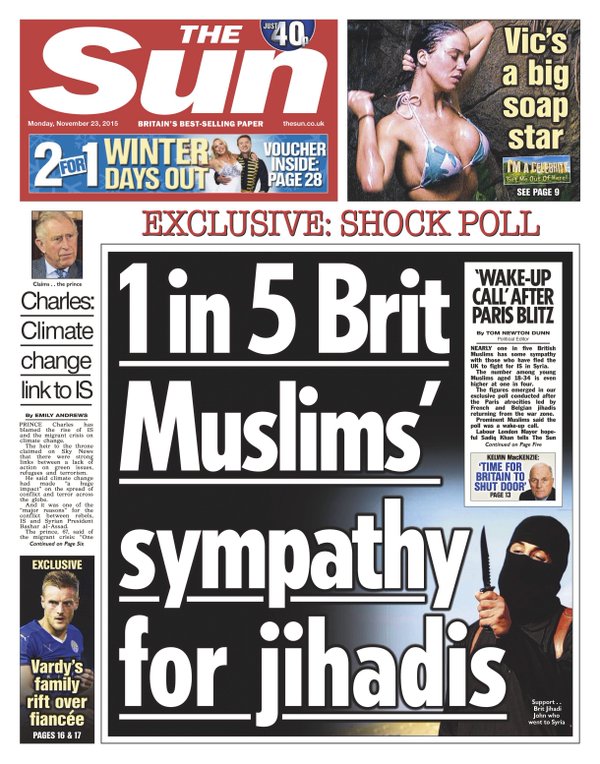 But scaremongering as a business model is not journalism, chair of National Union of Journalists Ethics Committee Chris Frost explained. “It allows people to draw conclusions and whips up hatred between communities. It is something that always hits home to me quite strongly.”

He said there was a huge depth to the general public’s ignorance on ethnic minorities, as people were inclined to read news which enforced their opinions or prejudices. “One of the problems with stories [like the 1 in 5 Brit Muslims’ Sympathy for jihadis] is that they give the readers evidence that things they think are correct or that the situation is worse than they thought.”

He said the influence prejudiced reporting had on the general population was “huge” and that the Independent Press Standards Organisation (IPSO), the regulator for the newspaper and magazine industry, needed stronger regulations.

Mr. Frost criticized the independence of the IPSO, as its board was made up of industry professionals from the publications it regulates. “We don’t want to be controlling newspapers, but there has to be a way of seriously enforcing the code. We all agree IPSO is a good starting point.

“If they are actually going to have an investigation into, say, the way Brexit was reported, it is not to say you can’t support Brexit, but newspapers have a responsibility – they shouldn’t tell lies.”

Financial pressure, particularly for the tabloids, was contributing to a disregard for accuracy and journalists were fighting to keep their jobs. “It is a way of raising circulation. Some of the tabloids are facing falling circulation, so it becomes an imperative.”

Mr. Kozbar has first-hand experience of dealing with inaccurate reporting, when a 2016 article in The Telegraph claimed Mr. Kozbar blamed the UK for the Islamic State, and supported the use of violence in the Israel-Palestine conflict.

“We have asked them to remove it and they have refused. I can’t talk too much more about it, but it is no secret that I am taking legal action against them. This is, of course, something which I prefer to avoid.” Mr. Kozbar also received threatening and abusive messages on Facebook and Twitter, following the story’s publication.

Mr. Frost said there were a number of articles in the tabloids which were clearly race baiting. “This is four, five, six national papers, so that is a very high number of people who are reading poison like that every day.

“With [reporting on] ethnic groups, it is not so much whether their stories are inaccurate, which many of them are, it is about news value – why is that story there? Is it saying Eastern Europeans are mainly here to claim benefits, when mostly they are here to work? It is not doing what journalism is there to do.”

CEO of East European Resource Centre Barbara Drozdowicz agrees that immigrants from Eastern Europe are regularly scapegoated in the British tabloids and explained that many immigrants had become normalized to discrimination.

The charity provides information, advice and support to people from Central and Eastern Europe. She avoids reading certain newspapers, but was wary of any press restrictions after living in countries where the press had been censored.

She added that there was a negative atmosphere, and some harassment at work as well as a general sense of being unwelcome.

“A Central or Eastern European person might think ‘Ok, I have been sweared at or spat at in the road, but I can get over this’. There is a psychological urge to move on.”

She said the “phone was ringing off the hook” with many seeking advice for discrimination or hate crimes the two months following the Brexit vote. She advised on incidents including property damage, window smashing and graffiti, but was disappointed with the response from schools and institutions.

“Eastern Europeans are essentially white. A quite common response from authorities is that white people can’t be victims of racism.

Ms. Drozdowicz noted that they had a lot of people phoning and saying the school was not doing anything and that their child was being bullied because of their ethnicity. She recalled incidents of severe beatings, where one school would not call the police. One school told them that they could not call it racism because the child was not black. “We are really worried about that.”

The Eastern and Central European community often reacted pragmatically to discrimination. She said a person would experience an average of 30 incidents of discrimination, hate speech or hate crime before they reported it, often because of negative experiences with police in their home countries.

“People find survival strategies. You don’t speak your native language on the phone in public for example, or if you are out at a restaurant and people sit next to you, you switch to English.”

Eastern and  Central Europeans also experienced exploitation, particularly those in low-skill occupations. “People will be underpaid and if they complain they will be told to ‘[expletive] off back to Poland.’

“There is no specific research but it is people who are in low paying manual occupations. The female occupations [tend to be] carers and cleaners, or male occupations like chefs and construction. It looks like they are more prevalent amongst what people think are the weakest links in the community.”

She said many people still suffered from the anti-immigration rhetoric.

“We did a survey last week and part of the questions was what are our problems in this country. The more professional, integrated people’s problem was that they were feeling less welcome. They can read the cultural cues, and they read the press and they hear the talk in the pub. Thirty percent of respondents, 400 participants, said their problem was feeling unwelcome.”

She said negativity towards Eastern and Central Europeans reflected anxieties around globalization.

“Places with newer waves of immigration reacted negatively [to increased migrant populations] even if they were already multi-cultural. It is just a reaction to change. It is not necessarily ethnically motivated hate, but it is an excuse.”

More resources needed to be given to integration, which would help to help disperse racism. “What we think should happen is local authorities should contribute more, and do meaningful things to help immigration. [They should] Give opportunities for local communities to meet their new members, and publicly say we are explicitly against hate crimes.

She said they needed more integration services like affordable English classes on the weekends and in the evenings too, and more information campaigns, adding that it takes a long time for anyone who moves to a new country to learn their ways.

Mr. Kozbar also felt integration needed to be more collaborative and called for an increase in journalism standards.

“It’s a collective responsibility between communities like the Muslim community and the government and the media as well. The media can play a big role in that – positive or negative. So far it is a negative role they are playing. We would like them to change that.”

He said there is a responsibility on their shoulders to engage more as a community and integrate more. “When we say integration, it’s not about shaving my beard or for the women to take off hijab, but it’s about contributing to the society – socially, economically, politically.”

“Give the opportunity for the Muslim community to engage and they will make the difference. We are part of the solution not part of the problem.”

Netanyahu’s Annexation, Brexit, and the Doctrine of National Self-Harm

by Ali Jackson-Jolley and Ava Jolley

What Will Be Left of UK’s Foreign Ties After Brexit?

How to Save the European Union From Post-Brexit Eurosclerosis