Syrian paramedics hold children in an ambulance on the second night of an evacuation operation in Douma in the Eastern Ghouta region late on December 27, 2017. Photo: AFP

People are trying to flee most dangerous parts of Eastern Ghouta, a rebel-held enclave near the Syrian capital of Damascus, as the humanitarian situation in the area continues to remain dire, a spokesperson for the U.N. Office for the Coordination of Humanitarian Affairs (OCHA) in Syria told The Globe Post.

On Wednesday, the first aid convoy since November entered Eastern Ghouta delivering supplies for 7,200 people in need in Nashabieh sub-district.

“The humanitarian situation in East Ghouta is dire,” the spokesperson said. “The escalation in hostilities over the last weeks has also caused people to flee their homes, with reports of hundreds of families desperate enough to seek refuge in other parts of East Ghouta many of which are not safer.”

The spokesperson underscored that people in the area remain in great need of assistance. “Our teams were told that the rations delivered will be shared among families, with five families sharing one basket, which is not enough to sustain them for long.” 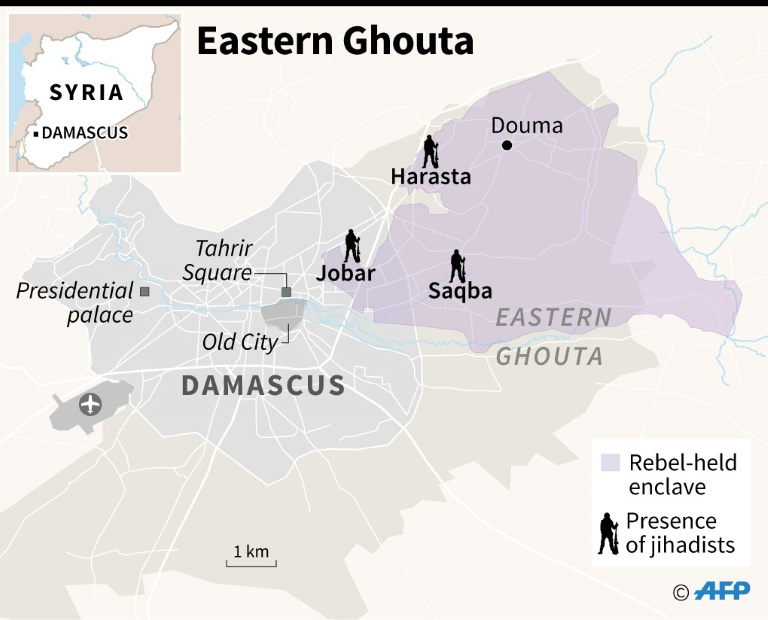 According to OCHA Syria, families living in the besieged enclave were forced to skip meals, some only having one meal a day. Some basic commodities are still available in the market, the spokesperson explained, but stocks are running low and prices are very high for the vast majority of people.

The increasing level of food insecurity is only one of many problems residents of Eastern Ghouta have to face on a daily basis. Medical facilities in the area are running out of critical supplies.

“Reports of cases of communicable diseases, such as tuberculosis, typhoid fever and scabies also emerged. Vaccines are running low, with the last campaign carried out in November 2017, and 600 children now reportedly at risk,” the spokesperson said. “The U.N. team saw expired anesthetics, the use of which has resulted in two deaths.”

Eastern Ghouta is held by two main Islamist factions, but jihadists control small pockets including one directly adjacent to the capital. The regime is keen to regain control of the area to halt the deadly salvo of rockets and mortars that rebels fire on Damascus.

All was quiet in the capital on Monday but since rumours of an imminent assault on Eastern Ghouta started spreading, people living close to the rebel enclave started packing their bags.

Jawad al-Obros, 30, said he was looking to move to a hotel in the western sector of the city to escape his home in an east Damascus neighbourhood that has been regularly hit by rockets from Ghouta.

“We’re tired of this situation. It seems that there’s no solution but a full-blown military one,” he told AFP.

More than 340,000 people have been killed since Syria’s conflict erupted in 2011 with protests against the government of President Bashar al-Assad. It has since evolved into a war that has carved up the country into rival zones of influence among the regime, rebels, jihadists, and Kurdish forces.

UN on Assad's disgusting siege of Eastern Ghouta: "Malnutrition rates have now reached unprecedented levels, with 11.9 per cent of children under five years old acutely malnourished – the highest rate recorded in Syria since the beginning of the crisis" pic.twitter.com/NRBmW8JlPL

with reporting by AFP

UN Warns Situation in Syria's Eastern Ghouta 'Out of Control'

Rohingya Refugees Refuse to Return to Myanmar Without Guarantees