During 2012 presidential campaign, Russian lawmaker Stanislav Govorukhin was stumping for Vladimir Putin in Cheboksary, the capital city of Chuvashia Republic, some 670 km east of Moscow. Govorukhin, who is also one of the top Russian movie directors, was supposed to meet with other politicians in one of the local restaurants, including the head of the republic and the city’s mayor. On the sidelines, he also agreed to meet with Darya Komarova, a journalist from the biggest local newspaper “Progorod,” for an interview.

“For our interview, we had a private room in the restaurant. I went in and the first thing he told me was: “Darya, you know, you have very beautiful legs. Could you take off your pantyhose and walk around the room, while I answer your questions,” Darya recounted. “I said that I am not going to do that, but I needed that interview, so I tolerated his conduct and kept asking questions,” she told The Globe Post.

“In the course of our conversation, as if nothing had happened, he asked me if I would like to take part in one of his films. Govorukhin invited me to join him for a glass of wine and spend the rest of the night with him,” she said.

Darya remembers how shocked and angry she was with Govorukhin’s behavior. After she turned his offer down, the then 76-year-old MP refused to carry on with the interview. The newspaper had a strict policy, where a journalist, who did not conduct a task would be charged a fee, including for transportation and any further costs.

Komarova did not want to leave with nothing and she insisted on the interview with him. “He was about to leave the room when I told him that if he wouldn’t answer my questions, I would go public and inform rest of politicians sitting in the next room about this incident.”

Govorukhin would eventually give Darya the interview, possibly out of fear that the story of harassment would become public and tarnish his reputation. Darya says she didn’t want to press charges against the director and chose to reveal these details in solidarity with her female colleagues who came out recently to reveal how they were sexually harassed by a member of the Russian Duma.

Govorukhin has never apologized to Darya for his behavior and even denied meeting her (although a copy of the interview is available on the journalist’s Facebook page). After revealing the story, Darya, who was until recently running presidential candidate Ksenia Sobchak’s campaign in Cheboksary, faced a massive amount of hateful comments online. Most of these comments, according to her, were partly sent from made-up, fake and anonymous accounts.

An unprecedented #MeToo movement started last year in the U.S. in which hundreds of women came out of shadows and told their horrifying experiences has partially hit Russia, launching a new debate about sexism and women’s rights in a country where no political figure has faced public allegations of that kind before.

Darya’s sexual misconduct story came after several female journalists accused Russian parliamentarian Leonid Slutsky of sexual harassment. Slutsky, the incumbent chairman of foreign affairs in the Duma, the national parliament, is a member of the liberal party LDPR, whose leader Vladimir Zhirinovsky publicly called the only female presidential candidate Ksenia Sobchak a “whore” during a live election debate. Before announcing her candidacy, Sobchak used to work as a journalist at the independent TV channel “Dozhd.”

On March 21, the Slutsky case was heard before the parliament’s ethics committee after accusers officially filed their complaints. The accusers were also invited to take part in the closed-door hearing.

The questioning has revealed the committee’s reluctance to investigate the allegations and instead push to discredit the accusers. Members of the committee repeated the same question over and over: “Why did you go public with the whole story right now? Or did you choose the timing wisely, so that it coincides with the presidential elections?” 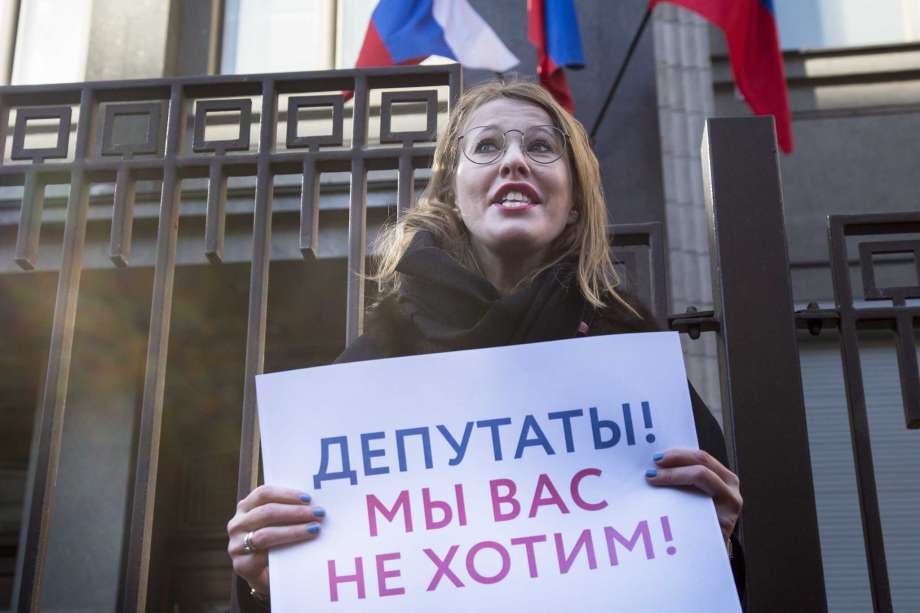 The central figure of the dispute –- Leonid Slutsky –- was interviewed by the committee separately from his accusers and there is no publicly available recording of that discussion. As a result, the ethics committee found that the MP’s behavior was not “offensive and there were no violations of the norms.”

To protest the decision, RBC, one of the key newspapers in the country, announced that its journalists would no longer cover Duma in person. Another news outlet, Kommersant, said they would cease any work with Slutsky as well as the Duma’s ethics committee.

The scandal kicked off after three female journalists leveled anonymous allegations against Slutsky and they went public later on. Darya Zhuk, a producer with Dozhd, Ekaterina Kotrikadze from RTVI and BBC correspondent Farida Rustamova told their stories, accusing Slutsky of sexual misconduct. Even conservative Russian foreign ministry spokeswoman Maria Zakharova weighed in, saying that during one appointment “Leonid started saying things (…) that I found very unpleasant.”

Slutsky claimed that the charges amounted to nothing, and should only be viewed as a “provocation” and an attempt to start a “dirty information campaign.” Last week, his supporters organized protests in front of the Duma, holding banners that said: “Western powers, keep your hands off Slutsky.”

The reactions from other Duma MPs have been similar. The head of the State Duma Committee on Family, Women and Children Tamara Pletneva said on the radio station “Echo Moskvy” that she did not believe the claims the journalists made, recommending women to dress “more decently and appropriately.” She added that she felt “very sorry” that the accused has had to go through all this trouble.

“That kind of reaction is not surprising at all,” says Tatyana Nikonova, feminist advocate, and blogger. “Some women, working in places of authority do not represent the interests or defend the rights of other women. They support their male colleagues and the governing party, so for them, there are no problems concerning women’s rights,” she told The Globe Post.

The scandal with Slutsky highlights an issue that has rarely been talked about in the country before, even transforming the language and introducing the word “harassment” into the Russian language, substituting its analogue — “domogatelstvo.”

The scale of the problem with sexual harassment is difficult to measure because of the lack of reliable statistical data. The Russian criminal code does not contain an article on “sexual harassment.” Therefore women in Russia have a limited number of legal instruments to charge someone or file a complaint if such an incident has occurred.

They can either apply article 131 of the criminal code, which deals with rape or take action in accordance with article 151 of the civil code for moral damages. Other relevant articles are 132 and 133: Violent Actions of Sexual Character and Compulsion to Perform Sexual Actions. Article 133 applies in cases when someone is forced to commit sexual acts (including having sex) by means of blackmail, threats, or other manipulations of their dependent status.

However, it is still unclear what to do in case of harassment since the term is not legally defined, and often does not meet the criteria of the article 133. The deputy head of the Russian State Duma Committee on Family, Women and Children, Oxana Pushkina is pushing through a new legislation to combat the problem and find a way for new legal instruments for women to defend themselves.

Anastasia Inopina, an advocate from ONA, a feminist NGO, and translator of feminism theories’ books, is skeptical that the initiative can be implemented. “The government couldn’t care less about the issue. Vladimir Putin has done enough to establish the macho-driven behavior in the society as a state ideology. He makes sexist, disrespectful jokes about violence and rape, even during official state meetings. So I do not believe that the lawmakers will be held responsible and face serious punishment,” she told The Globe Post. “In the meantime, though I am glad to see, how feminists are creating new initiatives and… trying to change the attitude in the society towards women’s rights,” she told The Globe Post.

The state-sponsored politics towards traditionalism and family values is one of the elements in Putin’s Russia. In February 2017, Duma lawmakers decriminalized domestic violence that does not gravely injure a person or cause serious bodily damage. The decision followed shortly after the viral Facebook campaign #IamNotScaredToSpeak, where hundreds of women in Russia and Ukraine publicly told sexual abuse stories.

An old Russian proverb says: “If he beats you, it means he loves you.” In a country characterized by the reawakening of religious belief, women are still very vulnerable. The society strongly believes that the family should sort out all private things on their own. According to Russia’s Ministry of Internal Affairs, women suffer from domestic violence to a greater extent than children. As a result of family conflicts, around 10,000 women were targets of domestic violence in 2016.

“It is still considered unethical in the society to unveil stories about domestic violence,” Irina Kosterina, Program Coordinator on Gender at the Moscow office of the German Heinrich Boell Foundation, told The Globe Post. “Police officers are very reluctant to register cases of domestic violence and women have to go through horrible and humiliating procedures. Could you imagine what would happen if women file sexual harassment charge to the police? The whole police station would mock the woman for this,” she said.

According to the findings of the Russian Public Opinion Research Center (VtsIOM), the majority of those polled hardly doubt that victims of violence or harassment are protected by the law and authorities do everything in their power to help. At the same time, it is striking that 44 percent of respondents consider victims responsible for being mistreated.

“Today, in Russian society we observe a phenomenon of victim-blaming. According to this logic, a woman is condemned for wearing a short skirt, or for returning back home late at night… In contrast to Western countries, there is a fundamentally different approach towards harassment in Russia,” Kosterina claims. “No legal definition exists, that could explain what measures could be taken in case of sexual harassment. Moreover, in the minds of people, a man who treats a woman with disrespect is perceived as a real man and he does nothing wrong except for complimenting her.”

In modern Russia, gender policy and women’s rights are ignored or not perceived as a serious matter while systemic sexism has become an essential part of everyday life. 54 percent of Russians expressed their unwillingness to see a woman as the head of the country, according to a poll conducted last year by independent analytical Levada Center.

The recent revelations of harassment cases are unlikely to bring fundamental changes in the judicial system or the Criminal Code. Nevertheless, the debate might help more women break the silence and publicly talk about issues that used to be a taboo. The #WomenTogether, which is just starting to gain the momentum, could become the Russian version of the #MeToo movement.

Tatyana Nikonova, the feminist advocate, thinks unity might be an answer to the society’s ills. “Women need to make sure, that they will find support and not be ashamed to share their stories. What we need right now is to unite against the problems.”