by Staff Writer
in World

Kim Jong-Un concluded a two-day whirlwind visit to China on Wednesday, where he declared North Korea’s unstinting “friendship” with Beijing in a show of loyalty to his main ally following a landmark summit with U.S. President Donald J. Trump.

It was Kim’s third official visit to China, designed to reassure Beijing that Pyongyang will not neglect its interests as Trump and the young autocrat move into uncharted diplomatic terrain.

The performance is part of a delicate balancing act for Kim, who analysts say is seeking to play U.S. and Chinese interests off each other while maintaining good relations with Beijing, his economic patron and diplomatic protector.

China and the U.S. both hope to see the Korean peninsula free of nuclear weapons. But Beijing is concerned Washington and Pyongyang might move closer at its expense, a possibility that China sees as threatening to its economic and security interests in the region.

While China was not present at the June 12 summit in Singapore, it lent Kim a plane to travel to the city-state, a clear sign that it remains an influential force in the diplomatic shuffle.

The Cold War-era allies, which fought side-by-side against U.S.-led U.N. forces and South Korea in the 1950-1953 Korean War, have sought to repair ties strained by Pyongyang’s nuclear tests and Beijing’s support of subsequent U.N. sanctions.

Kim chose Beijing for his first official foreign trip in March and met Xi again in May in the northeastern port city of Dalian.

Over the course of this two-day visit, Kim and Xi exchanged vows of friendship and promises of economic cooperation, in a carefully choreographed display of amity that ignored the recent history of chilly relations between the neighbours.

The North Korean leader, who was greeted by a military honour guard and cheering children at the Great Hall of the People Tuesday, said he valued the “recently strengthened strategic cooperation” between the two countries, according to North Korea’s official KCNA news agency.

“He expressed the determination and will to further develop the closer relations of friendship, unity and cooperation between the two parties and the two peoples of the DPRK and China,” KCNA said.

Kim also invoked the “prospect for the denuclearisation of the Korean Peninsula” following his meeting with Trump.

At a Wednesday meeting over tea at the Diaoyutai State Guesthouse, Xi said that “the two sides have jointly created a new history of China-DPRK high-level exchanges”, according to the Xinhua state news agency.

“The momentum for dialogue and easing of situation on the Korean Peninsula has been effectively strengthened,” Xi said.

“With joint efforts of China, the DPRK and related parties, the Korean Peninsula and the Northeast Asia will surely embrace the bright prospects of peace, stability, development and prosperity,” Xinhua quoted Xi as saying.

Following the meeting, Kim toured China’s an agricultural technology park and rail traffic control centre in Beijing, Xinhua said, in a possible hint at some of the North’s goals for future economic cooperation with China. 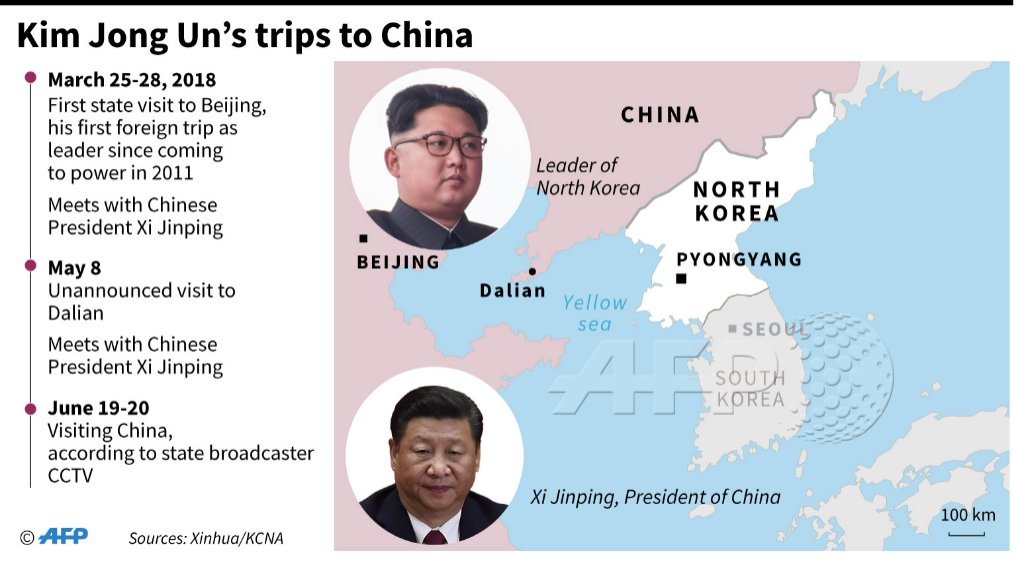 The official media of both countries did not say whether Kim and Xi discussed the prospect of easing UN sanctions that have crippled North Korea’s economy, though analysts said it could have been part of the agenda.

China has backed United Nations sanctions against its ally but indicated last year that the U.N. Security Council could consider easing the punitive measures.

For China, North Korea can serve as “an important card” as Beijing faces a potential trade war with the United States, Shin told AFP.

“For the North, it can also show to the world, especially the U.S., that Beijing has Pyongyang’s back if the North’s ties with the U.S. sour in the future,” Shin said.

US and China Impose Reciprocal Visa Restrictions Over Tibet Row

Unexpected Impacts: Cooperation and Conflict in Times of COVID-19

Pandemic Could Push 45 Million in Latin America Into Poverty: UN

Tensions in Serbia Rise as Anti-Government Protesters Clash With Police

Silence and Gendered Violence in the COVID-19 Pandemic

Unexpected Impacts: Cooperation and Conflict in Times of COVID-19

Silence and Gendered Violence in the COVID-19 Pandemic

Let’s End This Now: The Final Days of the Trump Administration

Syria’s War, Victims, and How Those Most Complicit Rationalize Horrors

Why Voting by Mail Is Part of the Right to Vote