by Staff Writer
in National

President Donald J. Trump ordered an end to the separation of migrant children from their parents on the U.S. border Wednesday, reversing a tough policy under heavy pressure from his fellow Republicans, Democrats and the international community.

Heart-rending scenes and sounds of crying children taken from their families have aroused a firestorm of opposition to Trump’s crackdown on illegal immigration. 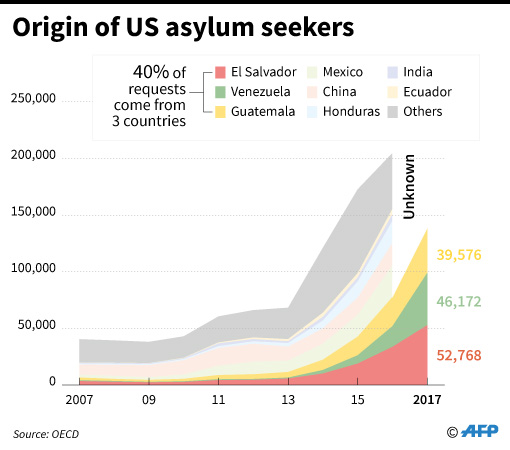 After long insisting that Congress alone could solve the problem, the Republican president finally took the matter into his own hands.

“We are going to keep families together. But we have to maintain toughness, or our country will be overrun by people, by all of the things that we don’t stand for,” Trump said at a meeting with cabinet members and Republican lawmakers.

Democrats are calling for an end to Trump’s barbaric family separation policy. #FamiliesBelongTogether

The U.S. House of Representatives is due to consider a bill on the issue Thursday. Republican House Speaker Paul Ryan said on Wednesday the legislation will resolve multiple issues in dealing with the high flow of illegal immigrants and asylum seekers, including the practice of separating families.

The spectacular about-face comes after more than 2,300 children were stripped from their parents and adult relatives after illegally crossing the border since May 5 and placed in tent camps and other facilities, with no way to contact their relatives.

Despite the order, there was no plan in place to reunite the thousands of children already separated from their families, according to multiple U.S. media reports citing officials from the Health and Human Services Department (HHS).

Those youngsters would remain separated while their parents were under federal custody during immigration proceedings, according to The New York Times, before officials backed off those comments late Wednesday.

Trump blamed the past administrations of George W. Bush and Barack Obama for not doing more to resolve the problem on their watch.

“This has been going on for many, many years. We’ll see if we can solve it. This is not something that happened just now,” he said.

It’s the Democrats fault, they won’t give us the votes needed to pass good immigration legislation. They want open borders, which breeds horrible crime. Republicans want security. But I am working on something – it never ends!

President Trump and Zero Tolerance for Victims of Persecution

Reclaiming Our Moral Compass: We Must Fight for Families