Recommendation to Give Teachers Guns Misses the Mark

by Chris Curran
in Opinion

The Federal Commission on School Safety, which was formed in the wake of several high-profile mass school shootings earlier this year, released its final report earlier this month. The report recommends, among other things, that school districts consider increasing the presence of armed school staff.

Perhaps unsurprisingly, the recommendation has been met with condemnation from both politicians on the left and public commentators. Detractors of the proposal contend that adding more guns to schools is not the solution to preventing violence. That said, the recommendation is not as universally condemned as the media may portray it. A recent poll by PDK suggests that half of the parents of primary and secondary education students in the U.S. support arming teachers if the teachers undergo screening and extensive training. Eight in ten support the presence of armed law enforcement in schools. 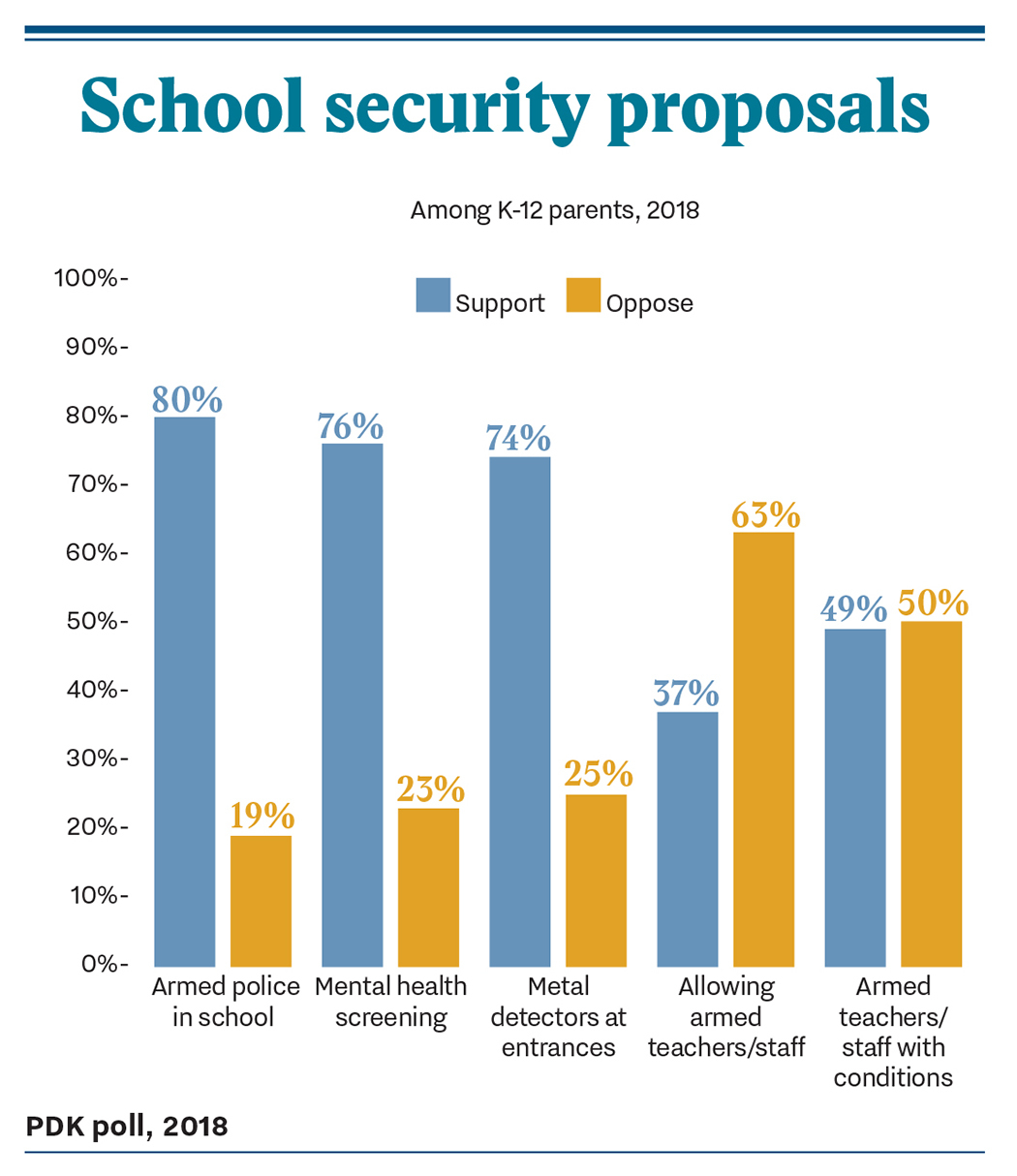 There is little empirical research on the effects of arming school staff, but past incidents of school violence provide mixed support for its use, reflecting the mixed views of the populous at large.

On the one hand, if a school shooting is to occur in a school, a rapid response by an armed first responder could save lives. Indeed, earlier this year in Maryland, a school resource officer responded to an active shooter, stopping the perpetrator within minutes of the initial attack.

But, the presence of an armed staff member is no guarantee that a shooting will be deterred or stopped. The school resource officer in Parkland, Florida failed to enter the building or engage the active shooter. Furthermore, in some cases, arming staff may actually create dangerous situations rather than prevent them. Several months back, a teacher in California who was trained and allowed to carry a firearm in school accidentally discharged the weapon and injured three students.

All of that said, as a researcher who studies school safety, the recommendation to increase armed school staff was not what I saw as most problematic about the Commission’s final report. First, the Commission missed an opportunity to provide recommendations for broader gun control. Secondly, the Commission used the report to undermine existing federal guidance aimed at ensuring effective and equitable use of school discipline.

While the evidence on arming teachers is limited, it is clear that broader attention to gun control could decrease a child’s likelihood of experiencing a mass school shooting. Studies have shown that where guns are more prevalent and accessible, acts of gun violence are also more likely to occur. In fact, the Commission’s report acknowledges that perpetrators of school violence often acquire weapons through legal means or by accessing guns legally owned by others in their household.

To its credit, the report recommends policies that would restrict access to guns by those deemed dangerous as well as approaches that would enhance public understanding of best practices for safe storage of firearms.

However, the Commission missed an opportunity to make bolder recommendations on gun control. Instead, the Commission made headlines several months back when Secretary of Education Betsy DeVos publicly stated that the Commission would not focus on guns “per se.”

Given that the Commission included Secretary DeVos and other high ranking members such as the Attorney General, the Secretary of Health and Human Services, and the Secretary of Homeland Security, there was an opportunity to provide a coherent, cross-cutting set of recommendations on gun control.

Such guidance is grounded in science. Empirical research has repeatedly demonstrated that suspending students has negative impacts on those students, disconnecting them from school and increasing their chances of future involvement with the justice system. Furthermore, studies have shown that students of color, particularly African American students, are disproportionately likely to experience a suspension. This difference isn’t explainable by differences in behavior across racial/ethnic groups.

Shortly after the Parkland shooting, Senator Marco Rubio made remarks suggesting that lax discipline resulting from the Obama-era guidance may have contributed to the tragedy. Research doesn’t support this claim. In fact, even the anecdotes of the specific instance don’t, as the Parkland shooter had been suspended.

While it is true that implementing alternative disciplinary approaches takes proper supports and training, schools should be doubling down on such supports rather than walking back to approaches of exclusion that have been shown not to be effective.

The Commission’s recommendation to rescind the school discipline guidance then is wrongheaded, both from the view of student safety and student academic success. It seems that, in this case, the tragedy of school violence was leveraged as an opportunity to recommend desired policy changes that are not actually linked to school violence.

The bottom line is that the Federal Commission on School Safety’s final report falls short of the recommendations needed to promote student safety in schools. At the end of the day, there is little evidence that arming school teachers will improve safety. Arming teachers might not be seen as necessary if better attention had been paid to what research says about gun control and school discipline.

Disclaimer: The views and opinions expressed here are those of the author and do not necessarily reflect the editorial position of The Globe Post.
Share14Tweet

Associate Professor of Educational Leadership and Policy, University of Florida

Can China Play a Mediating Role in Solving the Kashmir Dispute?