by Amitrajeet A. Batabyal
in Opinion

Wall Street in Lower Manhattan is known for its role in the international financial system. Photo: AFP

Many metrics about the United States economy tell us that it is doing well. In particular, the U.S. economy is growing rapidly, many American companies are generating noteworthy profits, and unemployment is at a record low. This notwithstanding, many in the financial community and some economists seem to think that we are in a beguilingly calm period before the proverbial storm.

What’s happening with the stock market?

Analysts frequently look at the stock market because stock prices are supposed to reflect expectations about the future health of an economy. In addition, stock prices often lead economic activity by causing what actually transpires in an economy.

That said, looking at the major stock indices in the U.S. – the Dow, the NASDAQ, and the S&P500 – 2018 was the worst year since the financial crisis in 2008. In particular, December was especially volatile with the S&P500 down 19 percent from a September high. The arrival of 2019 appears to have done little to stem the instability in the stock market. Specifically, the Dow declined by over 600 points on January 3 and then staged a remarkable 700 plus points rally on January 4. Why is the stock market behaving so unpredictably? Let us find out.

Simply put, the stock market is unsure about how to account for the uncertainty created by three salient concerns.

This concern appears to be shared by the International Monetary Fund (IMF) because the Fund recently lowered its global growth forecast in 2019 from 3.7 to 3.5 percent. There is some justification for this prognosis because financial markets across the world are beginning to tighten and investors are facing increasing economic risk.

The second concern is that the Federal Reserve (central banking system of the U.S.), erroneously believing that the U.S. economy is stronger than it actually is, will continue to raise interest rates even though it would make more sense to pause and adopt a “wait-and-see” approach.

Perhaps the Chair of the Federal Reserve Jerome Powell now realizes this. In fact, his recent reassuring words pointing out that the Federal Reserve may not keep raising rates in the near future is most likely responsible for the massive rally by the Dow index on 4 January 2019. Even so, the stock market is jittery about what the U.S. central bank might do in 2019.

The final and perhaps most salient concern stems from President Donald J. Trump’s numerous trade wars and specifically his trade war with China.

He has levied tariffs on about $250 billion of Chinese imports, and the Chinese have responded in kind by levying their own tariffs on $60 billion of American goods. This tit-for-tat scenario is now hurting businesses and consumers in the U.S., and hence the stock market is concerned not only about when this war will end but also about how it will end. 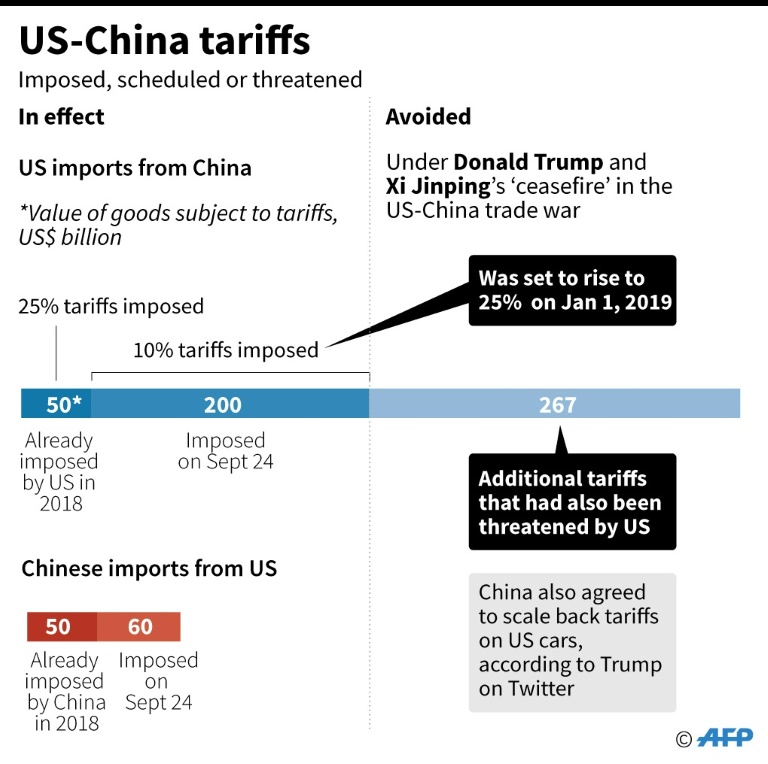 Presidents Trump and Chinese President Xi Jinping have negotiated a 90-day truce with the avowed aim of settling their differences. It is, however, unclear if the Chinese are willing to satisfactorily address the outstanding U.S. complaints regarding Chinese trade practices.

Although President Trump has launched a highly publicized campaign of slapping tariffs on Chinese exports to ostensibly get the Chinese to see the error of their ways, it is important to comprehend that some fundamental U.S. complaints pre-date Trump. They are not resolvable only with trade policies such as tariffs.

Many of the outstanding U.S. complaints have less to do with international trade per se and more with broader issues relating to market access, the forced transfer of technology, and the theft of intellectual property.

Since countries in the European Union share many of these concerns, the best way to address them would be to engage in robust diplomacy. This would allow the U.S. and the E.U. to jointly confront China about its unacceptable behavior. A joint and therefore credible stand is more likely to influence Chinese behavior than any set of tariffs, even punitive. The logical conclusion of this line of reasoning would be for the U.S. and the E.U. to jointly boycott China.

President Xi Jinping certainly does not expect the U.S. and the E.U. to put up a joint front against him and hence he is unlikely to be prepared to respond effectively. As such, acting in this manner would be entirely consistent with the venerable Chinese sage Sun Tzu’s advice in The Art of War to know one’s enemy and to “attack him where he is unprepared, [and to] appear where [one is] not expected.”

Disclaimer: The views and opinions expressed here are those of the author and do not necessarily reflect the editorial position of The Globe Post.
Share2Tweet

Arthur J. Gosnell Professor of Economics at the Rochester Institute of Technology. Batabyal has published over 600 papers, books, book chapters, and book reviews

National Emergency Over Wall Funding: Not So Fast Mr. Trump, Where’s the Fire?

An Immigrant’s Perspective on How to Fight Racism in America