People scavenging for food in the streets of Venezuela's capital Caracas. Photo: AFP

Venezuelans have been battered by an economic meltdown, shortages of food and medicine and a bitter political standoff between Maduro and opposition leader and self-proclaimed interim president Juan Guaido – who has been recognized by 54 countries.

“This situation has been exacerbated by sanctions,” U.N. rights chief Michelle Bachelet said.

Venezuela has the largest oil reserves in the world, and under Maduro’s leadership, its economy has become increasingly dependent on oil exports.

“These sanctions – the latest round – will have a crippling effect on the economy,” Eva Golinger, a former advisor to Maduro’s predecessor Hugo Chavez, told The Globe Post in a recent interview. 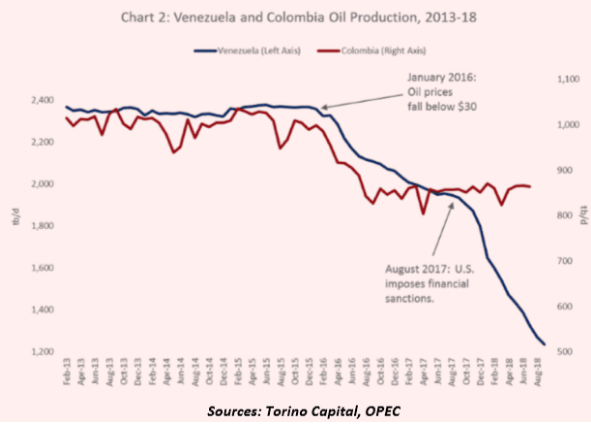 And while U.S. sanctions are often portrayed as “targeted” against the government and its officials, Golinger said they in fact have devastating effects on the population writ large.

“Venezuela will suffer greatly,” she said. “A lot of times the opposition in Venezuela and others in the mainstream media have tried to say, ‘well these are targeted sanctions, they don’t affect the majority of Venezuelans.’ Well that’s not true.”

The Trump administration has also blocked Maduro’s government from accessing it’s foreign assets and has handed Guaido control of Venezuela’s bank accounts in the United States.

The U.S. envoy for the crisis in Venezuela, Elliott Abrams, said Tuesday that Washington was weighing more punitive measures to increase the pressure on Maduro.

While the Trump administration has championed the cause of delivering “humanitarian aid” to the Venezualan people, offials in Maduro’s government have slammed the efforts as hypocritical.

“The U.S. has blocked our economy,” Venezuelan Foreign Minister Jorge Arreaza said. “The cost of this blockade is over $30 billion — and they are sending this so-called humanitarian aid for $20 million. So what is this? I’m choking you, I’m killing you, and then I’m giving you a cookie?”

While Bachelet said sanctions have contributed to the crisis, she also slammed Maduro’s “violations of civil and political rights” in her annual report to the UN Human Rights Council in Geneva.

“Venezuela clearly illustrates the way violations of civil and political rights – including failure to uphold fundamental freedoms, and the independence of key institutions – can accentuate a decline of economic and social rights,” said former Chile president Bachelet.

Guaido vowed Tuesday to increase pressure on Maduro, who in turn promised to crush a “crazed minority” that wants to remove him from power.

The 35-year-old National Assembly leader returned home Monday, having defied a ban on leaving the country to embark on a 10-day tour of South American allies. He remains free despite the threat of arrest by the government.

“Was that massacre a fabulous U.S. achievement?” This is the complete exchange between Rep. Ilhan Omar and Elliott Abrams, U.S. Special Envoy for Venezuela. pic.twitter.com/ipwHuGqqD5

“They thought the pressure had reached its zenith, but it’s only just beginning,” Guaido told reporters.

“Today more than ever, we are victorious against the conspiracy, against blackmail, while a crazy minority continues with their hatred,” he said in his first public comments since Guaido’s return.

When he returned to Caracas – his latest challenge to Maduro’s authority – Guaido announced to tens of thousands of supporters his plans for new protests.

He has vowed to set up a transitional government and hold new elections.

Abrams said that given Maduro’s low popularity, it would be “a gift” if he decided to run in fresh polls.

“That’s ultimately a decision for Venezuelans to make,” Abrams said.

Maduro finally made an appearance in the late afternoon to lead a military parade paying tribute to Chavez on the sixth anniversary of the socialist firebrand’s death.

Standing in front of Chavez’s mausoleum, Maduro also called on his supporters to take to the streets on Saturday, to mark “four years since” then-U.S. president Barack Obama first announced sanctions against the country.

Maduro has done this before, calling his own counter-demonstration every time Guaido announces a protest.

Both attract thousands of supporters, but the opposition gatherings usually have the edge in numbers.

Maduro had been active on Twitter earlier in the day, again paying tribute to the widely-beloved late president.

“Thanks to your teachings and your example we’re continuing the permanent fight against those who tried so many times to extinguish your voice,” wrote Maduro of Chavez.

Eva Golinger is an American attorney and journalist who was a legal advisor to former Venezuelan president Hugo Chavez. She’s also the author of the best-selling book, “Confidante of ‘Tyrants:’ The Story of the American Woman Trusted by the U.S.’s Biggest Enemies,” which documents her political work in Venezuela and her rise into the close circle of the country’s late president.

“I had breakfast with Hugo Chavez, lunch with Bashar al Assad, cocktails with Putin and dinner with Gaddafi. Fidel Castro sent me flowers, perfume and cigars. Ahmadinejad told me he loved me. Chavez proclaimed me his defender,” she writes.

Golinger sat down with The Globe Post to discuss the unraveling political crisis in Venezuela and the Trump administration’s efforts to overthrow the government of Nicolas Maduro.