by Uche C. Ezeh and Sangrag Ganguli
in Opinion

After the Washington State Department of Health confirmed 35 cases of measles, of which 24 were children younger than 10, Governor Jay Inslee declared a state of emergency on January 25. 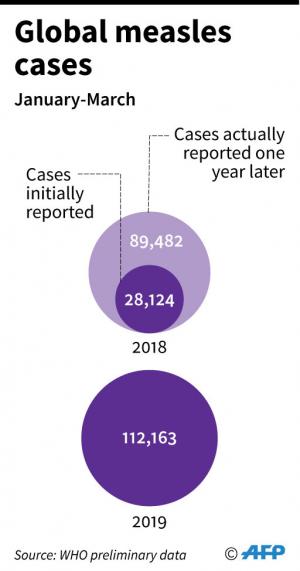 The measles virus is a highly contagious infection of the respiratory system that commonly presents as flu-like symptoms, followed by a total body rash. Prior to the introduction of a vaccine in 1963, the virus was the world’s leading cause of death among children. However, proper education and vaccination in the United States helped preventing outbreaks, and measles was declared eliminated by 2000.

Despite these efforts, cases of measles have increased in recent years, with 349 individual cases confirmed in the U.S. last year, the second-highest number since 2000. In spite of the high vaccination rates, the United States health protection agency CDC attributes measles spread to unvaccinated populations. Myths and misconceptions surrounding the disease and vaccination is one of the reasons why parents refuse to inoculate their children.

Misconceptions regarding the vaccine were propagated by a 1998 study that drew a speculative conclusion that associated immunization with autism. The study was later retracted and confirmed to be fraudulent.

While the cohort of anti-vaxxers have existed for decades, one particular rationale for opting out of vaccination is especially surprising. Texas State Representative Briscoe Cain recently explained that anti-vaxxers are motivated by their pursuit of liberty, claiming that “in the hierarchy of rights, liberty is higher than safety and security.” Essentially, parents value the freedom to decide whether or not to vaccinate their children.

How can one convince a group that firmly believes in an ideology heavily contradicting decades of research?

Initially, it seemed reasonable that through proper education, anti-vaxxers would be able to fully grasp the dangers of not vaccinating their children. However, the efficacy of this type of intervention is surprisingly low. The solution ultimately lies in the trust central to the patient-physician relationship.

Years of medical training instills a type of logical thinking in physicians that works well when diagnosis and treating illnesses. However, doctors need to be mindful that patients bring their own beliefs into the clinic, and even the smallest attempts to disrespect or ridicule their opinions could shatter their trust in physicians.

Additionally, engaging with anti-vaxxers to better understand their rationale would likely be more effective than confrontational interactions. Many would agree that federally mandating vaccinations for school-aged children is reasonable, but others, including Representative Cain, contend that mandatory vaccinations would be unconstitutional and governmental overreach. Therefore, a better approach is to improve public education about vaccination.

Parents in states such as Texas could benefit greatly from online vaccination programs prior to their first visit to pediatricians, as this can help debunk the myths surrounding vaccinations. Certainly, this may not dissuade anti-vaxx parents; however, these programs would educate them and help develop trust in vaccination. This allows these parents to formulate questions before a physician visit and, therefore, engage in more fruitful discussions.

Currently, 17 states allow parents exemption from vaccination due to moral, religious, or other beliefs. However, preventing children from receiving proper immunization increases the risk of spreading diseases such as measles.

Among the largest outbreaks in recent years were the 147 measles cases in California in 2015. This outbreak was so dangerous that the California state legislature passed a law banning non-medical exemptions for specific immunization requirements unless the State Department of Public Health deemed reasons for exemption appropriate. Similarly, New York lawmakers are demanding an end to non-medical exemptions to vaccination for school-aged children. These legislatures could play a significant role in preventing future outbreaks, and more states should begin mandating immunization as a condition of school attendance and employment.

Recently, CBS aired the story of Ethan Lindenberger, an Ohio teen who defied his mother’s wishes and chose to get immunized. His story serves as a reminder that there are no federal laws requiring children to be vaccinated, and that there are very few states where minors can get inoculated without parental consent.

Ethan’s decision to seek immunization is empowering and reminds us to carefully assess the misinformation regarding vaccination that can disseminate through social media. Furthermore, it is imperative for us as a nation to decide where we draw the line between the government being a guardian of public health and a protector of civil rights.

Disclaimer: The views and opinions expressed here are those of the author and do not necessarily reflect the editorial position of The Globe Post.
Share39Tweet