by Chan Young Bang
in Opinion

As the Hanoi summit and its positive momentum towards negotiations between North Korea and the United States disappear into the rear-view mirror, time is no longer on North Korea’s side.

As previous post-summit analyses have shown, North Korea’s leadership embraces negotiations in the hope of relief of the sanctions adopted, expanded, and applied throughout the last two years by the U.N. Security Council and the United States.

These sanctions, coupled with dwindling food supplies caused by last year’s drought, are acutely destabilizing and undermining the legitimacy of Pyongyang’s ruling elites. This is likely the reason why, shortly after the diplomatic clinch in Vietnam, Kim Jong-Un turned once again to historical patron Russia to renew cooperation ties and seek assistance.

The implosion at the Hanoi summit has undoubtedly left North Korea high and dry. The unprecedented scope of the sanctions has caused the country’s trade with China – accounting for more than 90 percent of North Korea’s total trade volume – to plunge by over 80 percent, while the annual economic growth rate has dropped to -5 percent.

In early April, the World Food Program warned that North Korea will face a shortfall of 1.4 million tons in food production this year due to high-temperature drought flooding.

The slowing exports and disruptions of the food supply are both highly destabilizing factors for the regime. These factors should be unpacked thoroughly to understand why lifting sanctions might be conducive to allow North Korea some extent of recovery but insufficient for the country to stand on its feet.

First, declines in exports are directly linked to a decrease in imports of essential goods, oil products, and production materials. This results in higher commodity prices and lower production by state-owned enterprises, which in turn triggers inflation.

Inflation pushes the population to resort to using foreign currencies (dollar, yuan, and euro) that are “unofficially tolerated” by the government. Foreign currencies cannot be controlled, yet are a driving force of the submerged market (Jangmadang) economy to be reckoned with.

Inflation and consequent foreign currency transactions create an increase in income polarization, widening the gap between those stuck (and nearly unpaid due to inflation) in unproductive jobs at state enterprises and the “new rich” (known as Donju), the merchants engaged in the informal economy who buy goods with foreign currency.

Furthermore, the disruption of the raw material supply to state enterprises greatly reduces their productivity and, as a result, loosens the distribution system which is the core of the bureaucratic control mechanism, thereby undermining the legitimacy of the system.

Due to the relaxation of the rationing system and the disruption of food supply, malnourishment and starvation are rising. Malnutrition spreads among workers, naturally leading to a decrease in labor productivity. The economic hardship caused by food shortages may soon lead to an uncontrollable increase of North Korean defectors. 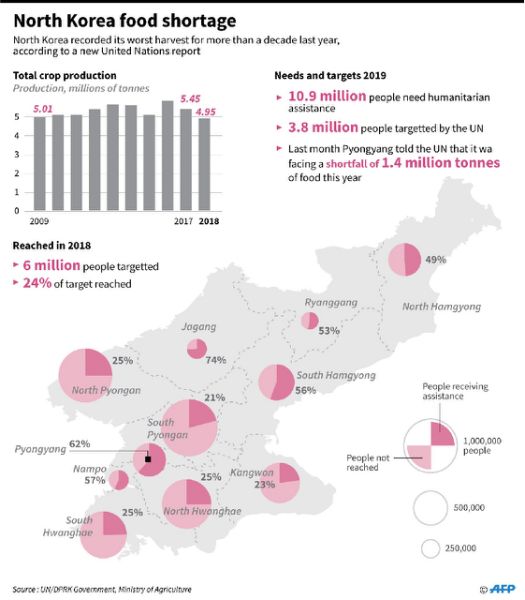 To avoid further chaos and hardship, Kim Jong-Un should invest his legacy into transforming the country’s traditional doctrine of self-sufficiency into one of gradual opening. The regime’s old ways can no longer save the people.

First, the U.S. should thoroughly assess the strategic interests and concerns of all stakeholders, recognizing that they are asymmetrical and therefore must be integrated within a shared, comprehensive policy.

Two of the actors in this puzzle – the U.S. and Japan – first and foremost want to see North Korea disarmed. They would also welcome a stable, pacified, and economically viable North Korea, but this is a secondary need.

The other actors – South Korea, China, and Russia – want to avoid North Korea’s collapse. This is why Seoul has been pushing for the reconstruction of inter-Korean trade and relations, while all three countries have tried to alleviate the sanctions over recent months.

As much as they may want to see a different leadership in charge of a denuclearized North Korea, the need to prevent a humanitarian disaster on their borders is paramount. For North Korea’s neighbors, denuclearization cannot come at the expense of regime collapse.

At this point, the ball can return to North Korea’s court. Simply put, what the leadership wants is survival; however, what the country and the leadership need is dynamic and sustained economic growth to cement the legitimacy of the government and maintain regional stability.

Second, leading in offering a blueprint for the future of North Korea as a stable, pacified, and economically viable state in Northeast Asia, the U.S. should accommodate the asymmetrical interests and concerns of all stakeholders so that each will contribute its unique assets to the solution.

The only effective resolution to the North Korea puzzle of denuclearization is unavoidably intertwined with the transformation of their bureaucratic, socialist economy into a dynamic, market-oriented one that will generate rapid economic growth and prosperity for the nation.

Such a solution demands an economic development plan over a minimum of ten years that would provide North Korea with sufficient financial and institutional support, including membership in the IMF and WTO throughout its transition. Additionally, it requires relinquishment of all weapons of mass destruction.

Still, no sum of money or mere resolve can ensure economic modernization. Effective economic reform is contingent upon a genuine ideological shift away from North Korea’s ruling paradigm of Juche (self-reliance) and Byungjin (parallel military and economic development), which has resulted in the state-ownership of all production means and exorbitant military expenditure, composing roughly 22 percent of the country’s GDP.

This system, lacking the essential experience and expertise to modernize its economy, will effectively squander any viable economic aid package it receives and, with it, any chance at survival.

President of KIMEP University, Principal Investigator at the DPRK Strategic Research Center, and former Economic Advisor to President Nazarbayev of Kazakhstan and former president of the USSR Mikhail Gorbachev. Author of numerous articles and seven books on prospects for peaceful settlement of the North Korean nuclear conflict