In 1937, Turkey’s founder Mustafa Kemal Ataturk told the French ambassador that liberating Hatay, or historical Antioch, is his “personal cause” and that “it is not a joke.” His bullying of France led Paris slowly give away Hatay, then part of Syria under the French mandate, to Turkey 2 years later.

Today, another Turkish leader, with Ataturk in mind, is refashioning the country’s borders with Syria. President Recep Tayyip Erdogan’s adventure in Syria, however, is bloody and messy. More than 60 Turkish soldiers have been killed in fierce battles against Islamic State militants since the army launched the military campaign called “Euphrates Shield” last summer.

No one yet knows why the Turkish army invaded northern Syria. Even Turkish leaders flip-flop about their ultimate aim in putting soldiers on the ground in one of the most complicated battlegrounds. President Erdogan first said the army would contain the terrorist threat from ISIS. He then expanded the scope of the war to include Syrian Kurdish YPG militias. In November, he said Turkey is in Syria to finish off “murderer [Bashar-al] Assad,” the Syrian president. His deputy, Numan Kurtulmus, said earlier this month that the campaign ends after the army takes over al-Bab. This week, Mr. Erdogan said the next targets would be Manbij. Other officials often talk about going all the way to Raqqa.

The conflicting statements illustrate the army’s campaign in Syria was not a well-calculated strategy and is being shaped based on circumstances and challenges. Turkish officials make contradictory remarks about the goals of the campaign, and no official has yet presented an exit strategy. 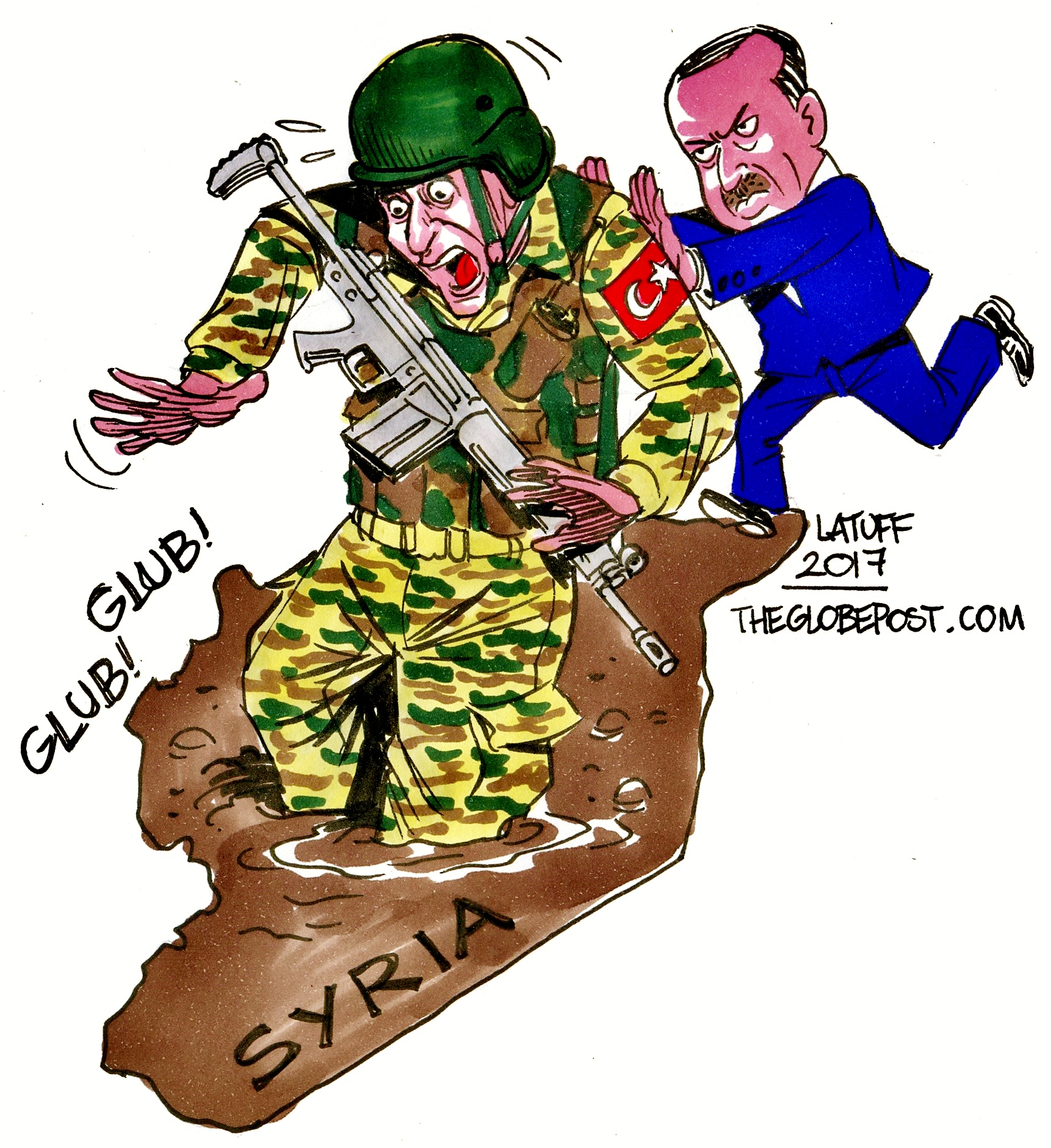 On Friday, the Turkish army said in a statement that ISIS’s hold on al-Bab is suffering blows thanks to the army’s efforts to fully control the Syrian town in the Aleppo countryside. It said the army already took control large parts of the city and that fighting to gain complete control continues. In an interview with Al Arabiya aired on Friday, Mr. Erdogan acknowledged that the soldiers are facing fierce fights in al-Bab and promised to clean the city in just “couple of days.”

Surveying havoc the Turkish military campaign is wreaking in Aleppo countryside, Syrian Observatory for Human Rights rejected the Turkish narrative that it broke the ISIS’s hold on the city. It said Turkish shelling on the city killed at least 45 civilians, including 18 children, only in the past 2 days.

The military is struggling to shake off the image that it is mired in a small Syrian town and unable to drive out a small pocket of ISIS militants. The army’s attempt to take over the Syrian city comes after a year distinguished by humiliating coup attempt at home, the incessant purge of generals, senior officers, and combat jet pilots, and a separate war against the Kurdish rebel groups in the region. The purge of military officers from an army that does not have an experience in ground military campaign and urban warfare has dealt a devastating blow to the prosecution of its war in Syria.

The purge of jet pilots, almost half of whom are in prison, also made the Turkish campaign dependent on U.S. and Russian air strikes. On Friday, US army chief Gen. Joseph Dunford was in Incirlik, U.S. airfield in southern Turkey, where he discussed with his Turkish counterpart, Hulusi Akar, about plans to flush out the ISIS from Syria.

Facing a cold shoulder from the U.S. due to Ankara’s separate war with the Syrian Kurdish militants, the most effective U.S. ally in anti-ISIS efforts, Turkey has continued leveling predictable blows against the U.S. Fikri Isik, Turkey’s defense minister, asked the U.S. on Thursday to dump Syrian Kurdish militias and branded them as terrorists. Ankara previously said it would not join the Raqqa offensive if the U.S.-led coalition decides to fight alongside with Syrian Kurds. Mr. Isik said Gen. Dunford would discuss exactly that contentious issue during his visit to Turkey.

Erdogan’s Syrian adventure has not always been an easy sell. A secret EU intel report suggested that those officers in the Turkish military who resisted the Syrian campaign were about to be purged and staged a pre-emptive coup plot. The campaign in Syria started just weeks after the military takeover failed and the senior officers were excised. Failing to capture al-Bab would inflict incalculable harm on the army’s reputation, and deal blow to its plans to advance to Manbij.

Manbij is another Syrian town close to the Turkish border and was in fact cleared from ISIS last year by a coalition of Kurdish and Arab forces. Turkey, however, says it cannot allow the city to be controlled by Kurds. Mr. Erdogan vowed to march to Manbij and drive out the Kurdish militants from the city to the east of Euphrates river, a longstanding Turkish claim. “After al-Bab is cleared, the next target is Manbij. Because Manbij belongs to Arabs. [But] there is the YPG, PYD. They have to withdraw from there,” Mr. Erdogan told Al Arabiya.

The U.S. is currently between a hard and rock place. While Syrian Kurds have always been the most effective partners in anti-ISIS efforts, Turkey is a NATO ally from where U.S. warplanes and drones take off to strike extremist group’s targets.

One solution to this dilemma could be deploying U.S. ground troops to Syria. The Pentagon is reportedly working on policy options that also include putting American boots on the ground, a policy that was repeatedly rejected by the Obama administration. That possibility, despite being slim, will put new muscle and momentum behind the Raqqa offensive and may make it easier for Turkey to come on board.

The struggle in northern Syria comes at a perilous moment for Mr. Erdogan. On Friday, he kicked off a campaign for a referendum slated for April for constitutional changes to expand his powers. Any failure in Syria would tarnish his reputation ahead of crucial polls.

by Jon Davis and Erielle Davidson