by Abdullah Ayasun
in Featured, World

In disregard of international norms and laws, the Malaysian government sent 3 Turkish nationals wanted by Ankara back to Turkey, ignoring the high risk of torture and mistreatment amid an expanding crackdown on the government opponents.

Turgay Karaman, 43, businessman Ihsan Aslan, 39, and academic Ismet Ozcelik, 58, all of whom are affiliated with Gulen movement, had been detained in brazen ways after being kidnapped by authorities last week.

Turkey’s global hunt for Gulen movement has reached a new level after Ankara ramped up pressure on its allies in the Islamic world to crack down on Gulen sympathizers. The case of the three Turks has spurred international attention, with human rights groups urging the Malaysian government to refuse the Turkish demand to extradite them.

That what exactly the Malaysian government did on Friday, a week after signing cooperation with President Recep Tayyip Erdogan‘s government against terrorism, a term which was broadly used by Ankara against all forms of political opposition. 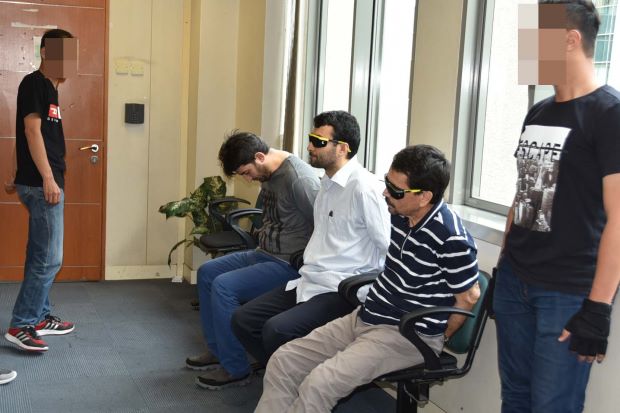 Human rights groups were quick to condemn deportation while the United Nations noted that the action raised concerns for the Turkish nationals’ safety in the region. Malaysia justified its action on the ground that they were a threat to national security, without offering plausible evidence that links the detainees to any act of violence.

“There is little doubt that if they are returned to Turkey, they will face torture in detention, and if charged with crimes there, be subjected to a trial that will far short of fair trial standards,” New York-based Human Rights Watch‘s deputy Asia director Phil Robertson said in a statement to the Guardian last week.

The course of official narrative adopted by the Malaysian authorities has also evolved. At first, when unusual detention of 3 Turkish nationals sparked a backlash from international community and rights groups, Malaysia’s chief police director said they were detained on suspicion of links to the Islamic State.

But on Friday, Malaysian Inspector-General of Police Khalid Abu Bakar unraveled the reason behind the deportation, saying that the three were sent to Turkey on Thursday on suspicion of involvement in FETO. The Turkish government has designated Gulen movement as a terrorist organization, calling it “Fethullah Gulen Terrorist Organization” which Turkey holds responsible for orchestrating the abortive coup attempt last summer.

Both U.S.-based Islamic scholar Fethullah Gulen and his sympathizers deny any link to the putsch that killed more than 250 people.

Mr. Abu Bakar defended the action, saying that the three Turks had links to Gulen movement, and they involved in FETO activities. Their passports were revoked by Ankara, and listed as wanted individuals, he noted.

“As such, their presence in Malaysia is invalid and their status declared as illegal immigrants,” Reuters quoted Mr. Abu Bakar as saying.

United Nations Human Rights Office voiced concerns about safety of the 3 Turkish nationals’ upon their return to Turkey.

Laurent Meillan, an official in U.N. Human Rights Office in Bangkok, told Reuters about possibility of expansion of Turkey’s crackdown on the Gulen movement across the Southeast Asian countries, going beyond Malaysia.

“Our concern is that other Turkish nationals with alleged links to the Gulen movement from across the region may be similarly detained and deported,” Meillan said in remarks to Reuters.

No Tolerance Even For Hunger Strike As Police Attacks Protesters

Pregnant Migrant Sets Herself on Fire in Greek Camp