President Trump met on Tuesday with his Turkish counterpart, Recep Tayyip Erdogan, as he rolls out a crackdown on opponents since his disputed victory in last month’s referendum, prompting cries of protest from rights groups. 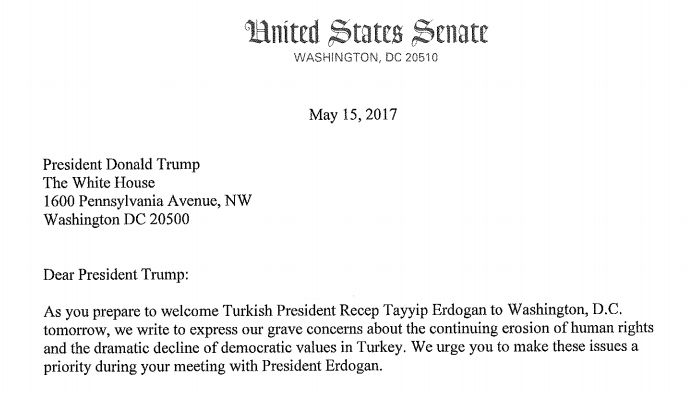 Mr. Trump was the first and the only Western leader to call his Turkish counterpart after the referendum victory last month. Buoyed by Mr. Trump’s congratulatory call, Mr. Erdogan hoped to make this trip a “new beginning” in relations that were strained in the final months of the Obama administration.

The senators’ letter came a day before 81 members of the U.S. Congress wrote a similar-worded letter, urging President Trump to press Mr. Erdogan to stop rights violations and release journalists.

Only a few words were different in two identical letters, showing both the Senate and the House made a joint effort to release the letters.

The Senate letter said Mr. Erdogan and his allies have mounted an assault on the rule of law, particularly using sweeping state of emergency authorities to stifle fundamental rights including free speech, undermine the independence of the judiciary, and quash any opposition to their undemocratic actions.

“They have thrown thousands of Turks in jail, on shaky and political grounds, particularly journalists reporting on their actions, and left many of their citizens, and even Americans in Turkey, fearful of their own futures,” the letter underscored.

On Tuesday, President Trump met with Mr. Erdogan at the White House, discussing a range of topics, including the ongoing conflict in Syria. Ahead of their working luncheon, both leaders held a press conference. Mr. Trump, largely praising Turkey’s history of strong partnership with the U.S., avoided mentioning Turkey’s human rights troubles, and instead praised Ankara’s efforts to battle terrorism in Turkey and in the region. 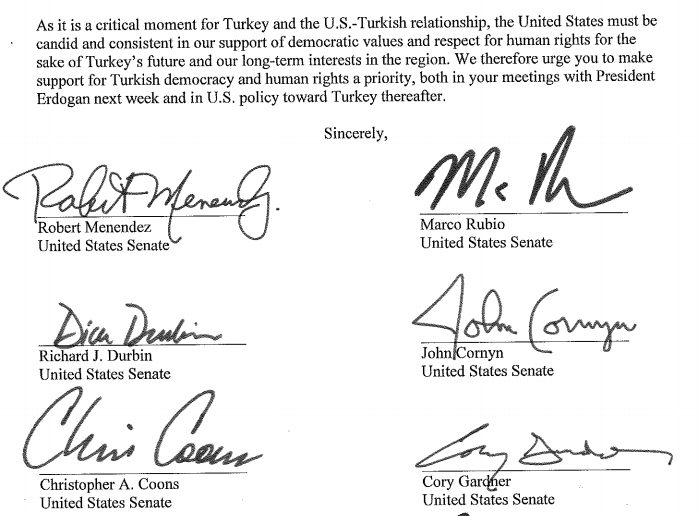 “As it is a critical moment for Turkey and the U.S.-Turkish relationship,” the Senators said, “the U.S. must be candid and consistent in our support of democratic values and respect for human rights for the sake of Turkey’s future.”

“We, therefore, urge you to make support for Turkish democracy a priority, both in your meetings with Erdogan this week and in U.S. policy toward Turkey thereafter.”

Trump Invited Erdogan To D.C. And His Bodyguards Beat Up Protesters

McCain Calls For Expulsion of Turkish Envoy After Violence