“If [Thomas] Edison had seen these days, he wouldn’t have invented the light bulb,” celebrity-turned-journalist Atilla Tas wrote on Twitter in 2014 when the whole country was swept by a massive corruption scandal involving then-Prime Minister Recep Tayyip Erdogan‘s family members and cabinet ministers.

For this and other similar tweets, prosecutors sought 2 aggravated life sentences for the former pop star who had a number of blockbuster songs in the 1990s. Along with him, 12 other journalists also face a similar jail sentence if convicted.

The light bulb is the logo of the AKP, symbolizing its fondness for removing darkness by bringing enlightenment and the party’s identification itself with a tech-savvy creed while preserving traditional roots of its identity. The logo was emblematic of the party’s founding ideology as it proudly presented itself as the “party of light.” 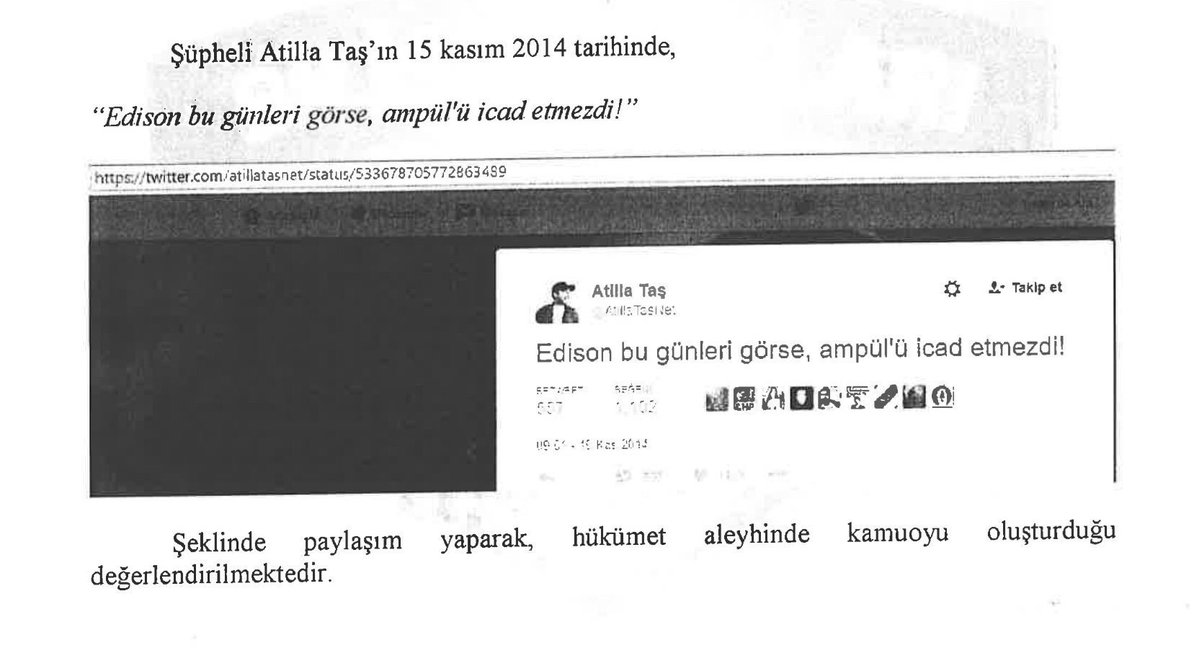 The prosecutor says Mr. Tas tried to shape a public opinion against the government with the tweet.

What infuriated the party elites indeed was Mr. Tas’ unmooring of the symbol from its historical context by revealing the paradox inherent in party’s self-negating policies. The former pop star meant AKP’s regressive policies, in contradiction with its founding principles, deprives it of the right to proclaim carrying the torch of progress, scientific and economic development.

If Edison somehow came back to earth and encountered with AKP using his light bulb as the party symbol, he would probably have never attempted to invent it. That was the implicit meaning of the tweet. And Mr. Tas faces 2 aggravated life sentences for exercising his right of free expression, which appears now as nothing but a dead letter.

The nature of accusations against journalists and the tragicomic evidence that presented to the court only undercut entire process of media trials. Prosecutors refer to some critical or satirical tweets as evidence for “attempting to topple the government through armed methods or coup, removal of constitutional order and involvement in terrorist activities.”

The same parody and drama play out for the Cumhuriyet daily and Zaman trials. Dozens of journalists face severe prison sentences after a shabby prosecutorial process.

EU, Turkey, and Migrants: One Way or Another Europe Will Pay Dearly

Russia in Syria’s Idlib: Why the Kremlin Cares

'Those Were Lies.' Comey Rejects Trump's Loss Of Confidence Claims

COVID-19’s Climate Gains: What Will Be Left If Economies Open Again?

The Pacific Front: Australia and US Must Counter China’s Expansionism

Will Coronavirus Help Push Environmental Efforts or Set Them Back?

We Are in Crisis. It Is Time to Let Go of ‘Non-Essential’ Executives