Erdogan Slams US Over Arrest Decision For His Bodyguards

Turkey’s President Recep Tayyip Erdogan sharply criticized the U.S. authorities for seeking arrest of members of his security team for their involvement in a brawl during his visit last month, signaling a new diplomatic rift that could further strain ties.

D.C. Police on Thursday issued arrest warrants for 12 members of President Erdogan’s security detail, while it already detained 2 Turks over involvement in attacks against protesters during Mr. Erdogan’s visit to Turkish Ambassador’s Residence on May 16. 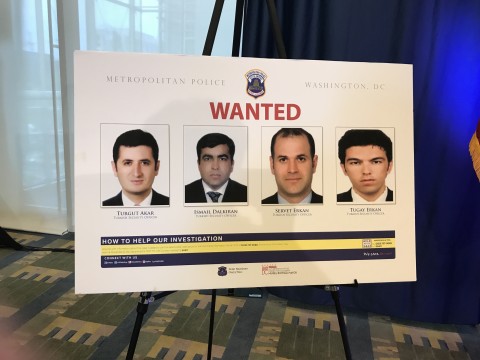 Sinan Narin of Virginia and Eyup Yildirim of New Jersey have been placed behind bars over charges of felony and misdemeanor assault. Washington police officials told media that they seek arrests of 18 people in total.

“The charges filed against 12 Turkish security officials send a clear message that the United States does not tolerate individuals who use intimidation and violence to stifle freedom of speech and legitimate political expression,” U.S. State Department Spokesperson Heather Nauert said at a press briefing on Wednesday. “The State Department will continue to work with law enforcement and relevant legal authorities in the case when outcome is reached the Department will determine if any additional steps will need to be taken.”

It insisted that Turkish citizens cannot be held responsible for security failures that caused the incident.

“The decision, which clearly was not taken as a result of an impartial and independent investigation, is unacceptable,” the statement added.

“We all saw the violence that was perpetrated against the protesters,” D.C Police Chief Peter Newsham said at a press conference on Thursday. He said they are “not going to tolerate this.”

Speaking at a fast-breaking Ramadan dinner on Thursday, the Turkish president accused the U.S. authorities of failing to provide adequate security during his presence outside the Embassy.

He vowed that Turkey will pursue a political and legal battle to overturn the decision.

It is far from clear whether President Erdogan will continue to foreign trips with same members of his security detail who face arrest risk after arrest warrant by American law enforcement officials.

President Erdogan claimed that members of Kurdistan Worker’s Party (PKK) and FETO were united to stir provocation during his entrance to Embassy.

“The PKK and FETO united to hold a demonstration against my personality with the range of 40-50 meters. And the U.S. police did nothing. What would happen if the same thing occurs in Turkey,” President Erdogan said in an expression of fulmination against the move.

“They [police] did nothing to [stop] the protest and even arrested our two countrymen who intervened to [push back] protesters,” the Turkish president said.

He even went ballistic over the arrest warrant against 12 members of his security detail. “What kind of law [justice] is this? If they [guards] don’t protect me, why I would bring them to the U.S.”

He expressed his disdain and distrust for the U.S. protection. “Should I protect myself with Hans of the U.S? When American leaders come to my country, they even don’t allow Turkish police to their cars. When we go there, they press for ‘placing their police to our vehicles,'” President Erdogan said regarding diplomatic protocols regulating security of foreign diplomatic delegations during official visits.

The violent brawl between protesters and the Turkish security team sent ripples across the U.S. political spectrum, sparking swift condemnation from U.S. congressmen on bipartisan base.

Republican Senator John McCain called for the expulsion of the Turkish Ambassador to the U.S. in a display of fury following the attack by Mr. Erdogan’s guards against protesters.

The House of Representatives passed a Resolution with 397-0 vote to condemn the altercation and calling for holding Turkish security team as accountable for their action.

During his speech on Thursday, President Erdogan did not offer any apology for the behavior of his security detail but reprimanded the U.S. officials for seeking arrest of his guards.